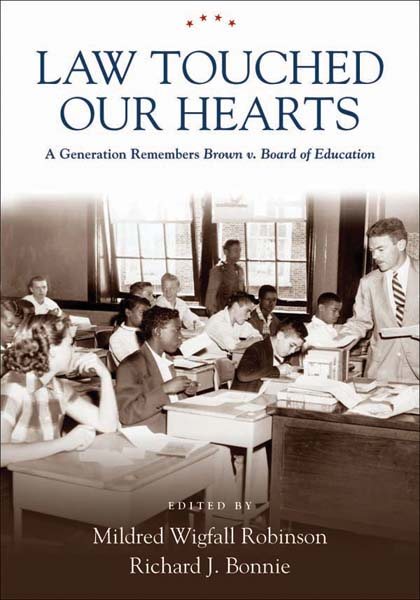 Editors Robinson (U. of Virginia School of Law) and Bonnie (Institute of Law, Psychiatry, and Public Policy, U. of Virginia) offer the personal reactions of 40 law professors from across the country to Brown v. Board of Education, the landmark 1954 Supreme Court school desegregation decision. The essays were written by men and women, black and white, and detail their childhood experiences in the classroom and in their communities and how the Brown decision affected them. The decision elevated the issue of race relations from a "dirty secret" to a topic of critical national importance. The essays reflect that. Annotation ©2009 Book News, Inc., Portland, OR (booknews.com) Read More
In February 1954, President Eisenhower invited Chief Justice Warren to dinner at the White House. Among the guests were well-known opponents of school desegregation. During that evening, Eisenhower commented to Warren that "law and force cannot change a man's heart." Three months later, however, the Supreme Court handed down its unanimous decision in Brown, and the contributors to this book, like people across the country, were profoundly changed by it, even though many saw almost nothing change in their communities.What Brown did was to elevate race from the country's dirty secret to its most urgent topic of conversation. This book stands alone in presenting, in one source, stories of black and white Americans, men and women, from all parts of the nation, who were public school students during the years immediately after Brown. All shared an epiphany. Some became aware of race and the burden of racial separation. Others dared to hope that the yoke of racial oppression would at last be lifted.The editors surveyed 4750 law professors born between 1936 and 1954, received 1000 responses, and derived these forty essays from those willing to write personal accounts of their childhood experiences in the classroom and in their communities. Their moving stories of how Brown affected them say much about race relations then and now. They also provide a picture of how social change can shape the careers of an entire generation in one profession.Contributors provide accounts from across the nation. Represented are-de jure states, those segregated by law at the time of Brown, including Alabama, Florida, Georgia, Louisiana, Maryland, Mississippi, North Carolina, South Carolina, Tennessee, Virginia, as well as the District of Columbia-de facto states, those where segregation was illegal but a common practice, including California, Illinois, Kansas, Massachusetts, Missouri, New Jersey, New York, Ohio, Washington, and Wisconsin. Read Less

Goodreads reviews for Law Touched Our Hearts: A Generation Remembers Brown v. Board of Education

Later Italian Painting in the National Gallery of Art