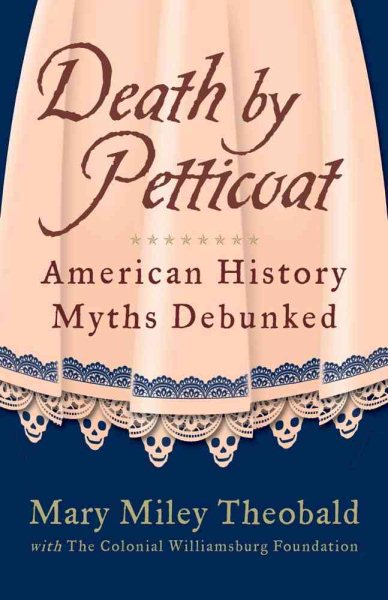 Exposes the truth behind sixty-three widely-held misconceptions of American history. Read More
From famous legends to embellished truths to outright fabrications, Death by Petticoat debunks myths from American history in witty, entertaining narratives that shed light on the real truth about the past.  Every day stories from American history that are not true are repeated in museums and classrooms across the country. Some are outright fabrications; others contain a kernel of truth that has been embellished over the years. Collaborating with The Colonial Williamsburg Foundation, Mary Miley Theobald has uncovered the truth behind many widely repeated myth-understandings in our history in Death by Petticoat including:* Hat makers really were driven mad. They were poisoned by the mercury used in making hats from furs. Their symptoms included hallucinations, tremors, and twitching, which looked like insanity to people of the 17th and 18th centuries--and the phrase "mad as a hatter" came about.* The idea that portrait painters gave discounts if their subjects posed with one hand inside the vest (so they didn't have to paint fingers and leading to the saying that something "costs an arm and a leg") is strictly myth. It isn't likely that Napoleon, King George III, or George Washington were concerned about getting a discount from their portrait painters.Pregnant women secluded themselves indoors, uneven stairs were made to trip up burglars, people bathed once a year, women had tiny waists, apprenticeships lasted seven years--Death by Petticoat reveals the truth about these hysterical historical myth-understandings. Read Less

Williamsburg Christmas: The Story of Decoration in the Colon...

Dressing up Your Bedroom: Over 30 Beautiful Projects to Make