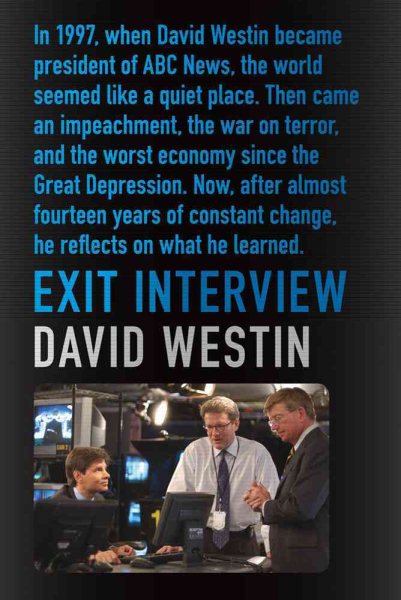 Looks at David Westin's tenure as the president of ABC News, including such events as 9/11, the 2000 election, and the wars in Iraq and Afghanistan. Read More
When David Westin became president of ABC News in March 1997, the division was treading water. "It looked like all the really important news was behind us," he writes. Hardly. For the next thirteen years, Westin would preside over ABC News during some of the most important and perplexing events in its history:• President Clinton's impeachment• The tied 2000 presidential election• The 9/11 attacks• Conflicts in Iraq and Afghanistan• The swift boat smear campaign against Senator John KerryExit Interview is a behind-the-scenes look at Westin's tenure and the major news that marked it. He takes us inside the chaos of the newsroom--alongside major players such as Peter Jennings, Barbara Walters, Diane Sawyer, and Bob Woodruff--where what looks clear and certain from the outside is often mired in conflict and urgency. Neither an apologia nor a critique, the book charts the ups and downs of fourteen formative years in network news, addressing basic questions about how our news is reported, from the point of view of someone who was there. With milestones from the recent past, Westin explores the uncertainty inherent in his job, and its central question: Is it possible for journalists to be both good at their jobs and people of good moral character? Read Less

The Practical Handbook of Group Counseling. Group Work with...

The Complete Round the World Meat Cook Book