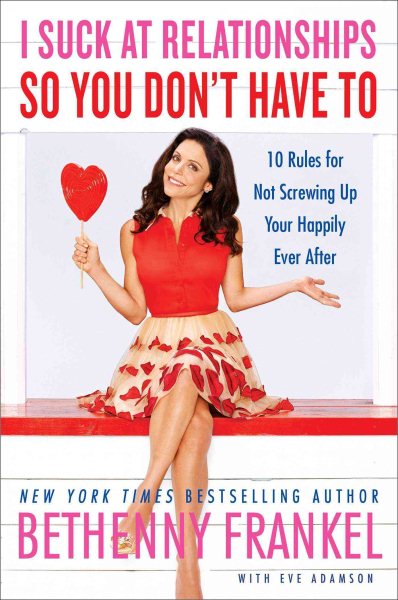 Drawing on her own dating history and relationship disasters, the author dispenses her trademark no-nonsense advice to women, helping them to understand what it takes to find and sustain a meaningful connection. Read More
Bethenny Frankel, four-time New York Times bestselling author, self-made businesswoman, and media maven, offers her hard-won guidance on dating and relationships in the tradition of her breakout book, A Place of Yes.Bethenny is good at many things—being an entrepreneur, mom, and TV star—but when it comes to relationships, she is the first to admit that she has had many failures. The good news is, in working through the mistakes, she has already learned many things about what she doesn’t want, that she won’t accept, and that she shouldn’t settle for. And most importantly, she still believes in love and that her perfect relationship is still to come. Filled with a mix of candid personal stories and the no-nonsense advice she’s known for, I Suck at Relationships So You Don’t Have To is the next step on Bethenny’s A Place of Yes journey. This is a book by someone who has made many relationship mistakes and knows a thing or two because of it. Bethenny takes a deep look at her own dating and relationship history and gets to the heart of the mistakes women make and what it takes to find and sustain a meaningful connection. Look for Bethenny’s take on hot topics such as: understanding your man; the dos and don’ts of dating; how to trust your gut; and much more. Despite all her relationship disasters, Bethenny remains an optimist; she keeps going, keeps trying, and continues to open her heart to love. She holds that failure ultimately adds up to something and, that in the end, all mishaps are stair steps to a greater success. Read Less

Goodreads reviews for I Suck at Relationships So You Don't Have To: 10 Rules for Not Screwing Up Your Happily Ever After

Body By Bethenny with Bethenny Frankel

Naturally Thin: Unleash Your SkinnyGirl and Free Yourself fr...