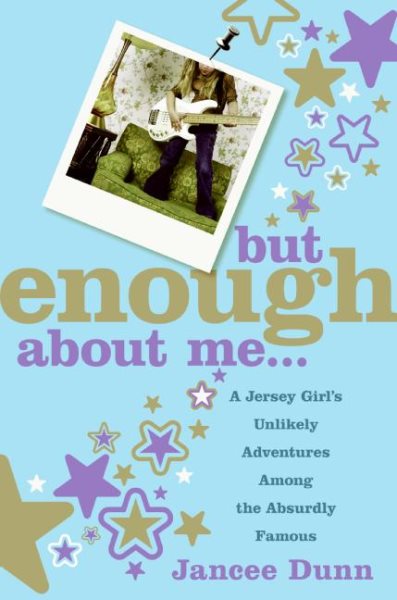 The author details her odyssey from an ordinary family life in suburban central New Jersey to the hip, stylish, and celebrity world of "Rolling Stone" magazine. Read More
The second I stepped through the doors of Rolling Stone as a real employee, I wanted to shake off my old personality like the rigid husk of a cicada. But how could I cultivate a new, hip persona when I lived with my parents in a New Jersey suburb and wore black leggings as pants?New Jersey in the 1980s had everything Jancee Dunn wanted: trips down the shore, Bruce Springsteen, a tantalizing array of malls, and, especially, her family. Barreling down the Turnpike in her parents’ Buick LeSabre, her perm brushing the ceiling of the car, she felt ragingly alive. But one night she met a girl who worked at Rolling Stone magazine in New York City. To Jancee, who visited the city exactly once a year with her parents and two sisters, New York might as well have been in Canada. But she loved music, so with bleak expectations she passed along her résumé, dashing her father’s hopes that she would carry on the family legacy of service to J. C. Penney (a man so revered that a bust of his head was proudly displayed in the den) .Soon Jancee found herself backstage and behind the scenes, interviewing a countless (and nerve-racking) parade of some of the most famous people in the world, among them Madonna, Cameron Diaz, and Beyoncé. She trekked to the Canadian Rockies to hike with Brad Pitt, was chased by paparazzi who mistook her for Ben Affleck’s new girlfriend, snacked on Velveeta with Dolly Parton, and danced drunkenly onstage with the Beastie Boys. She even became a TV star as a pioneering VJ on MTV2. As her life spun faster, she plunged into the booze-soaked rock-and-roll life, trading her good-girl suburban past for late nights and hipster guys. But then a chance meeting turned Jancee’s life in an unexpected direction and helped her to finally learn to appreciate where she came from, who she was, and what she wanted to be.Riotously funny and tremendously touching, But Enough About Me is the story of an outsider who couldn’t quite bring herself to become an insider and introduces readers to a hysterical, lovable real-life heroine. Read Less

Goodreads reviews for But Enough About Me: A Jersey Girl's Unlikely Adventures Among the Absurdly Famous

But Enough About Me: How a Small-Town Girl Went from Shag Ca...