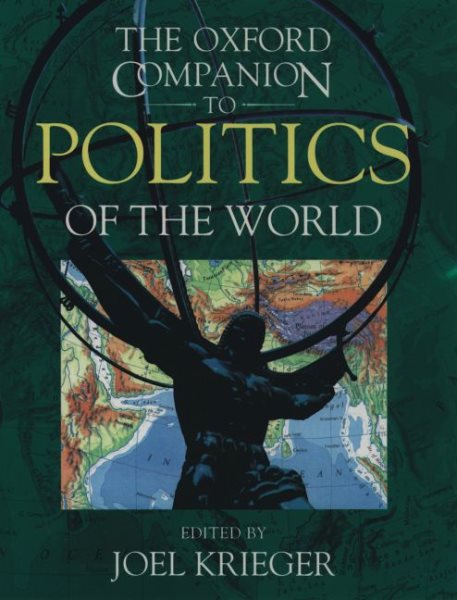 Articles discuss international affairs, political institutions and leaders, historical developments, and sources of political change and conflict around the world Read More
Will the end of superpower rivalry bring greater international harmony--or more volatile and dangerously unpredictable conflicts? Where two massive spheres of influence once divided the globe, now regional conflicts erupt into scenes of tragedy and confusion. In Africa, the new Europe, Asia, and the Americas, nations chart a bold course toward democracy. But they cannot break free of old divisions, as ethnic nationalism emerges amidst economic devastation. Indeed, nations everywhere, however powerful, are buffeted on every side. Their sovereignty is checked by the global economy as well as powerful regional economic and political blocs. At a time of exceptional ferment, Oxford is pleased to present the most authoritative, timely, in-depth reference available for understanding the people, nations, conflicts, movements, institutions, and issues that dominate the world political stage. Edited by a team of eminent political scientists, The Oxford Companion to Politics of the World provides readers the depth of coverage, the historical contexts, and the richness of interpretation needed to come to terms with today's volatile international scene. Drawing on the insights of nearly 500 authors from more than 40 countries, the volume provides comprehensive coverage of international affairs and domestic politics throughout the world. Articles discuss virtually every nation in the world, and include extensive information on institutions, political parties, leaders, and the sources of political mobilization and conflict. The volume also includes biographies of more than seventy-five political leaders and thinkers who have shaped the contemporary political world, and detailed discussions of critical historical developments and events, concepts, international law, and organizations. For example, there is a biography of Richard M. Nixon by Garry Wills and one of Winston Churchill by Martin Gilbert; an essay on development and underdevelopment by Claude Ake; an article on human rights by Aryeh Neier; coverage of such subjects as Hiroshima, sovereignty, and the International Court of Justice by Richard Falk. Todd Gitlin writes on the New Left, Anthony Lake on the Vietnam War, and Robert B. Reich on deindustrialization. Charlotte Bunch examines feminism, and Zhores A. Medvedev explains Chernobyl. The Companion also presents major interpretive essays treating seminal contemporary themes such as ethnicity, nationalism, war, gender and politics, and environmentalism, essays that offer readers a deeper, more substantial understanding of headlines day after day. Drawn from a wide range of disciplines, including political science, economics, women's studies, law, anthropology, history, and business, the contributors to the volume provide factual information, new insights, and fresh interpretations as they consider the critical political developments of the twentieth century. The Oxford Companions have long been respected for their lively and informative presentation of the finest scholarship. (Harper's has called the "the best reference books in the language.") The Oxford Companion to Politics of the World maintains this high standard in an accessible, timely, thought-provoking, and comprehensive reference that captures the complexity, vitality, and endless fascination of contemporary world affairs. Read Less

Goodreads reviews for The Oxford Companion to Politics of the World