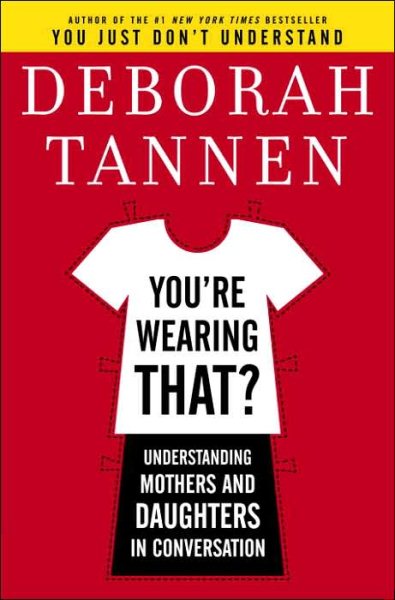 A study of the mother-daughter relationship examines aspects of this complex bond and shows how to improve communication within a family by developing an understanding of other points of view. Read More
Deborah Tannen's #1 New York Times bestseller You Just Don’t Understand revolutionized communication between women and men. Now, in her most provocative and engaging book to date, she takes on what is potentially the most fraught and passionate connection of women’s lives: the mother-daughter relationship.It was Tannen who first showed us that men and women speak different languages. Mothers and daughters speak the same language–but still often misunderstand each other, as they struggle to find the right balance between closeness and independence. Both mothers and daughters want to be seen for who they are, but tend to see the other as falling short of who she should be. Each overestimates the other’s power and underestimates her own. Why do daughters complain that their mothers always criticize, while mothers feel hurt that their daughters shut them out? Why do mothers and daughters critique each other on the Big Three–hair, clothes, and weight–while longing for approval and understanding? And why do they scrutinize each other for reflections of themselves? Deborah Tannen answers these and many other questions as she explains why a remark that would be harmless coming from anyone else can cause an explosion when it comes from your mother or your daughter. She examines every aspect of this complex dynamic, from the dark side that can shadow a woman throughout her life, to the new technologies like e-mail and instant messaging that are transforming mother-daughter communication. Most important, she helps mothers and daughters understand each other, the key to improving their relationship.With groundbreaking insights, pitch-perfect dialogues, and deeply moving memories of her own mother, Tannen untangles the knots daughters and mothers can get tied up in. Readers will appreciate Tannen’s humor as they see themselves on every page and come away with real hope for breaking down barriers and opening new lines of communication. Eye-opening and heartfelt, You’re Wearing That? illuminates and enriches one of the most important relationships in our lives.“Tannen analyzes and decodes scores of conversations between moms and daughters. These exchanges are so real they can make you squirm as you relive the last fraught conversation you had with your own mother or daughter. But Tannen doesn't just point out the pitfalls of the mother-daughter relationship, she also provides guidance for changing the conversations (or the way that we feel about the conversations) before they degenerate into what Tannen calls a mutually aggravating spiral, a "self-perpetuating cycle of escalating responses that become provocations." – The San Francisco Chronicle  Read Less

Goodreads reviews for You're Wearing That?: Understanding Mothers and Daughters in Conversation

You're Wearing That?: Understanding Mothers and Daughters in...

I Only Say This Because I Love You: Talking to Your Parents,...

You're Wearing That?: Understanding Mothers and Daughters in...