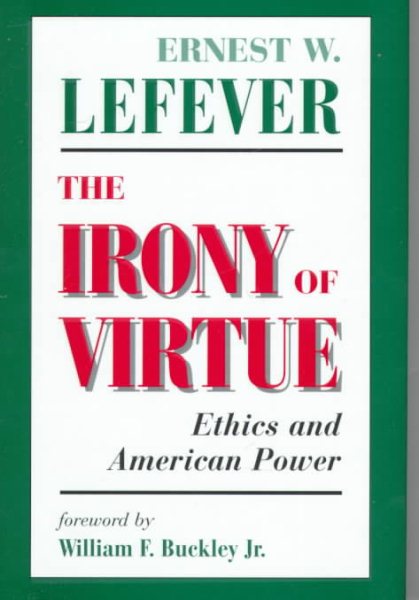 In this definitive anthology of one of America’s most respected neoconservatives, Ernest Lefever vividly portrays his spiritual and political pilgrimage from a liberal pacifist during World War II to a humane realist. Read More
This definitive anthology is the fruit of one of America’s most respected neoconservatives. Trained in Christian ethics, Ernest Lefever has been an articulate public policy advocate. Both conservatives and liberals will ignore his views at their peril.In this first-ever anthology of his most important work, Lefever takes a bold and lively march through the second half of the twentieth century. As an acute participant-observer who cares deeply about peace, freedom, and human dignity, Lefever became a neoconservative twenty years before Irving Kristol coined the term. For this volume, Lefever selected forty of his most influential essays from some 500 published pieces. They reveal his dramatic transformation from a liberal pacifist during World War II to a humane realist.The earliest essays, from Lefever’s Yale Divinity School days, recount his experience as a civil rights activist during World War II and as a relief worker in the POW camps of postwar Europe. Later essays assess such institutions as the United Nations and the World Council of Churches. Lefever tackles a myriad policy issues from nuclear testing and human rights to arms control and the collapse of communism. His essays on the Berlin Wall and his reappraisal of the Vietnam legacy confirm his skill at combining history, political theory, and opinion journalism. An introductory autobiographical sketch vividly portrays Lefever’s spiritual and political pilgrimage. Read Less

Goodreads reviews for The Irony Of Virtue: Ethics And American Power

Scholars, Dollars, and Public Policy: A New Frontiers in Cor...