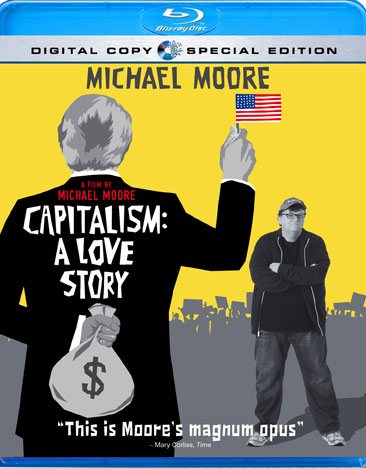 Moore examines the conflicts of American democracy and unchecked capitalism, and how the combination led to the mortgage crisis of 2008. Read More
"On the 20-year anniversary of his groundbreaking masterpiece Roger & Me, Michael Moore delivers ?The most important and urgent political film of our time? (Dan Siegel, HUFFINGTON POST), Capitalism: A Love Story, coming home to the issue he?s been examining throughout his career: the disastrous impact of corporate dominance on the everyday lives of Americans (and by default, the rest of the world). This time, however, the culprit is much bigger than General Motors, the crime scene far wider than Flint, Michigan, and the punishment is a public condemnation that is both ?Boldly hilarious and brutally honest? (Jeff Craig, SIXTY SECOND PREVIEW).ÿ From Middle America, to the halls of power in Washington, to the global financial epicenter in Manhattan, Moore takes us into the homes of ordinary people whose lives have been turned upside-down by corporate greed and the politicians who allowed it to happen. With humor and outrage, ?The greatest documentary filmmaker of our time?(Larry King), explores uncharted territory to answer the question he?s posed throughout his illustrious filmmaking career: Where?s our money?" Read Less

Where to Invade Next