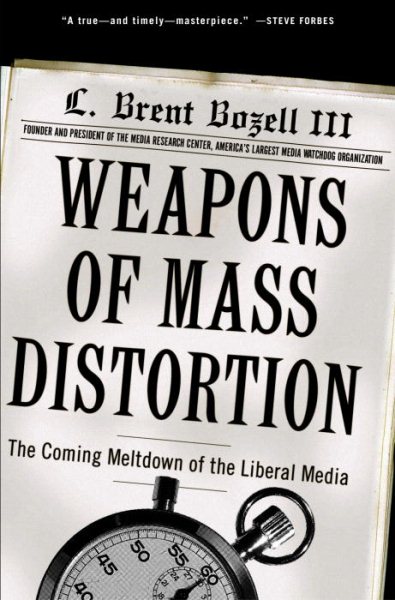 A founder and president of the Media Research Center, a media watchdog organization, analyzes the prevalence of today's liberal media bias, identifying how major news outlets distort the news and manipulate the national agenda. Read More
Could Al Franken and his left-wing cronies possibly be right? Is liberal media bias just a myth propagated by conservatives, and have the mainstream media actually swung to the right? Absolutely not.In the new book Weapons of Mass Distortion, L. Brent Bozell III—founder and president of the Media Research Center, America’s largest and most respected media watchdog organization—presents the definitive account of how liberal bias in the news industry is alive and well. But here’s the thing: The liberal media are headed for a downfall. Bozell demonstrates how their monopoly on information is at last coming to an end, in large part because journalists continue to deny the bias that infects their news coverage. His unrivaled expertise allows him to show readers exactly how the media landscape is changing—and to expose the even bigger changes that are coming.Marshaling an astonishing amount of evidence, Bozell documents exactly how the news media deliberately attempt to set the national agenda through their slanted coverage. In the process he destroys the arguments that Franken and many other left-wing commentators have put forward regarding media bias.Weapons of Mass Distortion also reveals:• How the liberal media’s slanted coverage of President George W. Bush will play a huge role in the 2004 elections• Why liberals’ claims about the influence of Fox News and the “conservative media” are wrong—and deliberately misleading• How the mainstream press has waged war on the war on terrorism• Never-before-told stories of how leading journalists, behind the scenes, betray the liberal bias they so forcefully deny in public—incidents that Bozell has witnessed firsthand• How the same journalists who condemn the Right for “hate speech” regularly launch (and get away with) vicious personal attacks on conservatives • Clear evidence that the major news outlets are hemorrhaging viewers, readers, and listeners precisely because of their liberal biasBy dominating the news media for so long, liberals have been able to control what we see and hear. But as Bozell makes clear, the Left will lose that control soon enough. Read Less

Goodreads reviews for Weapons of Mass Distortion: The Coming Meltdown of the Liberal Media

Pattern of Deception: The Media's Role in the Clinton Presid...