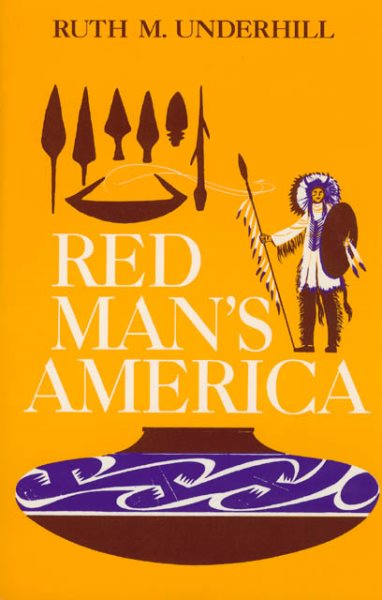 All-encompassing study of the cultural traditions and evolution of the North American Indians from pre-history to the present Read More
Red Man's America meets the great need for a comprehensive study of Indian societies from the first Stone Age hunters to the American citizens of today. Beginning with the first migrations of primitive man from Siberia in the Old World to Alaska in the New, probably during the latter part of the Pleistocene glaciations, and his subsequent migration southward and eastward, the author takes up in turn the tribes and cultures of the various regions of North America.The material Professor Underhill has gathered from the fields of archaeology, ethnology, and history, together with that drawn from her own experience in the United States Indian Service, produces a fascinating narrative.Red Man's America is an important contribution to our heritage of Indian life and lore."A work for which both sociologist and historian will be forever grateful. The author has combined a long period of study with actual field work in the service of the Indian to produce a work that gives a brief, but well written and accurate, sketch of the origins, backgrounds, and customs of the various North American tribes. . . . There is no other modern single volume that contains as much information on the subject."—E.R. Vollmar,The Historical Bulletin"Liveliness in style and illustration, together with perspicacity in content, makes this book a useful introduction to the civilization of the original inhabitants of the land."—Pacific Historical Review Read Less

Goodreads reviews for Red Man's America: A History of Indians in the United States

The Navajos (The Civilization of the American Indian Series)

Red Man's Religion: Beliefs and Practices of the Indians Nor...