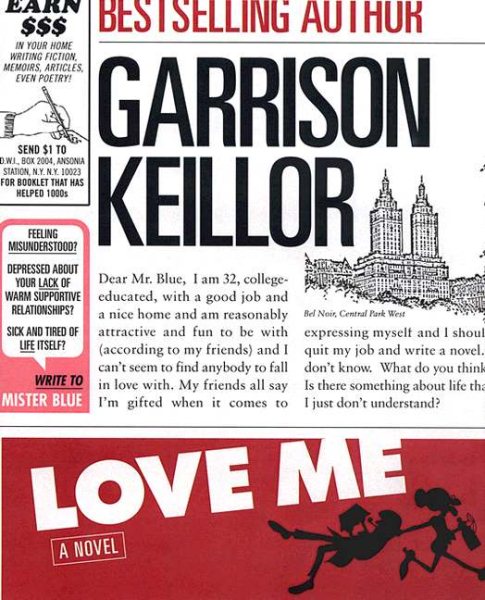 Leaving his wife to pursue an idealized life as a writer, Larry Wyler finds his early successes quickly deteriorating and returns home to write for an advice column, through which he learns unexpected life lessons. Read More
The enterprising Larry Wyler, settled in St. Paul with his beloved Iris, an earnest Democrat out to save the world, sits upstairs and writes stories and lands one in The New Yorker, the Canaanland of all English majors. While Iris devotes herself to rescuing demented geezers and chemically dependent single moms, he sets his sights on literary prominence.When his first novel, Spacious Skies, becomes a hit, he leaves Iris behind and buys a Manhattan apartment with a fabulous terrace and moves into an office at The New Yorker among Salinger, Trillin, Updike, Powers - writers he admires - and the great editor William Shawn.Wyler and Shawn become pals, sailing around New York Harbor on the Shawnee, drinking man-size martinis, but Wyler's followup novel, Amber Waves of Grain, bombs badly. ("Why did I write so much about soybeans in the first chapter?" he wonders.) And then comes a long spell of writer's block. Wyler despairs until out of nowhere comes an invitation to write a newspaper advice column, "Ask Mr. Blue" - a low rung on the literary ladder, but writing commonsense advice to the lonely and the frustrated provides a much-needed distraction and initiates Larry's own long recovery. As he doles out wisdom to Exasperated, whose wife gives up her judgeship for figure skating, and Nice Lady, who is abusive to the obese, and Secular Humanist, who suddenly notices his girlfriend is Amish, Wyler slowly, painfully finds a measure of clarity for his own life. He confronts the evil New Yorker publisher Tony Crossandotti and sets out to win back his wife's affections. Read Less

Goodreads reviews for Love Me