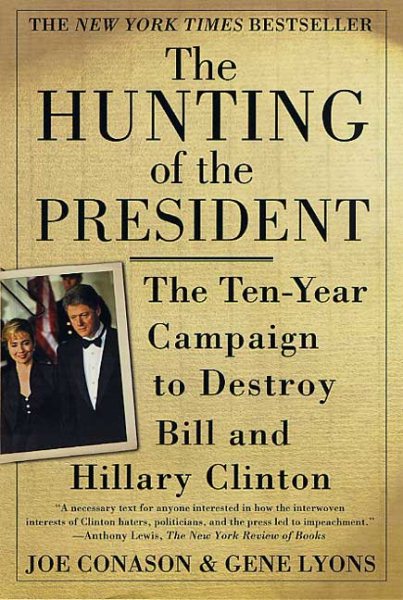 Examines the campaign to discredit Bill and Hillary Clinton which began in 1989 and almost brought down the president ten years later. Read More
When Hillary Clinton spoke of "a vast right-wing conspiracy" determined to bring down the president, many people dismissed the idea. Yet if the first lady's accusation was exaggerated, the facts that have since emerged point toward a covert and often concerted effort by Bill Clinton's enemies--abetted by his own reckless behavior--which led inexorably to impeachment. Clinton's foes launched a cascade of well-financed attacks that undermined American democracy and nearly destroyed the Clinton presidency.In vivid prose, Joe Conason and Gene Lyons, two award-winning veteran journalists, identify the antagonists, reveal their tactics, trace the millions of dollars that subsidized them, and examine how and why mainstream news organizations aided those who were determined to bring down Bill Clinton, The Hunting of the President may very well be the All the President's Men of this political regime. Read Less

Goodreads reviews for The Hunting of the President: The Ten-Year Campaign to Destroy Bill and Hillary Clinton

The Hunting of the President: The Ten-Year Campaign to Destr...

Fools for Scandal: How The Media Invented Whitewater