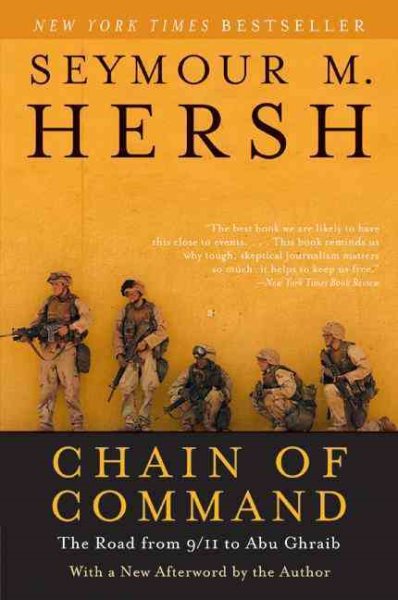 Looks at President George W. Bush's handling of the War on Terrorism, offering thoughts on such topics as intelligence failures, claims of weapons of mass destruction, and the scandal at Abu Graib Prison. Read More
Since September 11, 2001, Seymour M. Hersh has riveted readers -- and outraged the Bush Administration -- with his explosive stories in The New Yorker, including his headline-making pieces on the abuse of prisoners at Abu Ghraib. Now, Hersh brings together what he has learned, along with new reporting, to answer the critical question of the last four years: How did America get from the clear morning when two planes crashed into the World Trade Center to a divisive and dirty war in Iraq?In Chain of Command, Hersh takes an unflinching look behind the public story of the war on terror and into the lies and obsessions that led America into Iraq. Hersh draws on sources at the highest levels of the American government and intelligence community, in foreign capitals, and on the battlefield for an unparalleled view of a critical chapter in America's recent history. In a new afterword, he critiques the government's failure to adequately investigate prisoner abuse -- at Abu Ghraib and elsewhere -- and punish those responsible. With an introduction by The New Yorker's editor, David Remnick, Chain of Command is a devastating portrait of an administration blinded by ideology and of a president whose decisions have made the world a more dangerous place for America. Read Less

Goodreads reviews for Chain of Command: The Road from 9/11 to Abu Ghraib (P.S.)

The Dark Side of Camelot

The Dark Side of Camelot

The Price of Power: Kissinger in the Nixon White House