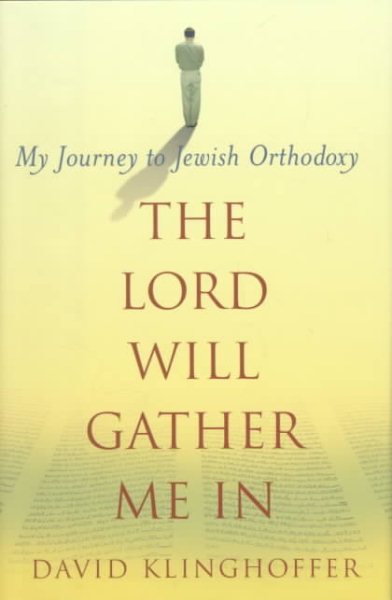 The author recounts his slow conversion from secular success to Orthodox Judaism, a process influenced by his discovery of his non-Judaic ancestry Read More
Why would a comfortably affluent, well-educated, secular Jew seek out the rigorous discipline of traditional Jewish observance? This is the intriguing question behind not just David Klinghoffer's personal story, but the growing movement of Jewish ba'alei teshuvah. In recent decades, tens of thousands of young Jews have returned to Orthodox Judaism, responding in a startling way to the spiritual hunger felt by millions of Americans. They have found that Orthodoxy means not withdrawing from the world, but coming to feel God's presence in every facet of life. Klinghoffer, one of these newly traditional Jews, also happens to be a highly articulate, sensitive, and sympathetic writer who states his beliefs so reasonably that readers will be hard-pressed to explain why everyone isn't Orthodox. Writing with style and wit, Klinghoffer describes his secular Jewish parents; his 1970s Southern California upbringing, complete with professional disco dancers at his bar mitzvah; and his first serious girlfriend, a committed Catholic. Behind all these experiences are nagging questions: Why do some Jews persist in observing Torah commandments that to the uninitiated seem impossibly esoteric? After three millennia, why is the Jewish tradition still so puzzling and disturbing, to Jews no less than to non-Jews? Slowly, at first clumsily, young David explores traditional Judaism. Wanting to do the right thing, he tries to ceremonially re-circumcise himself in a bathtub at home -- at the age of twelve. By adulthood he feels that God is guiding him in some particular direction. An adoptee, he often thinks of the line from Psalm 27, "Should my father and mother abandon me, the Lord will gather me in." Yet even after two more conversions, he doesn't understand the heart of Judaism until after he has set out to find his Swedish birth mother, a non-Jew, who reveals to him a family secret that sends David on a research mission to Stockholm. There, among 200-year-old birth and death records from a Swedish church, he discovers what it means to be a Jew. Read Less

Goodreads reviews for Lord Will Gather Me In: My Journey to Jewish Orthodoxy

Why the Jews Rejected Jesus: The Turning Point in Western Hi...

The Gift of Rest: Rediscovering the Beauty of the Sabbath

The Gift of Rest: Rediscovering the Beauty of the Sabbath