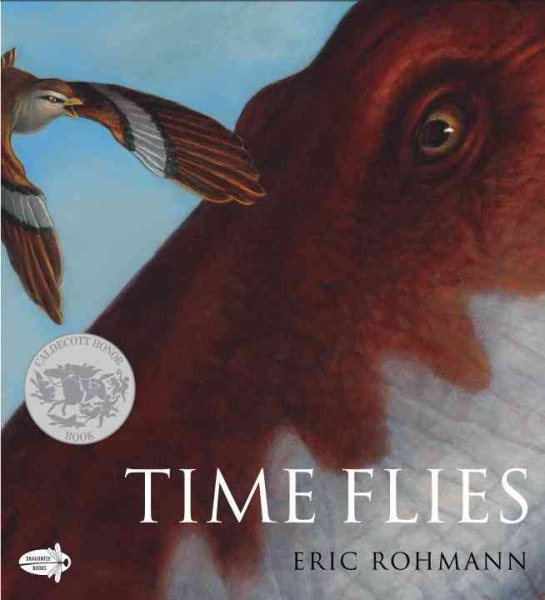 A wordless tale in which a bird flying around the dinosaur exhibit in a museum has an unsettling experience when it finds itself back in the time of living dinosaurs. Read More
Eric Rohmann's Caldecott Honor-winning debut is now available as a Dragonfly paperback. It is at once a wordless time-travel adventure and a meditation on the scientific theory that dinosaurs were the evolutionary ancestors of birds.  Time Flies , a wordless picture book, is inspired by the theory that birds are the modern relatives of dinosaurs.  This story conveys the tale of a bird trapped in a dinosaur exhibit at a natural history museum.  Through Eric's use of color, readers can actually see the bird enter into a mouth of a dinosaur, and then escape unscathed.The New York Times Book Review called Time Flies "a work of informed imagination and masterly storytelling unobtrusively underpinned by good science...an entirely absorbing narrative made all the more rich by its wordlessness." Kirkus Reviews hailed it as "a splendid debut."   Read Less

My Friend Rabbit: A Picture Book

My Friend Rabbit: A Picture Book