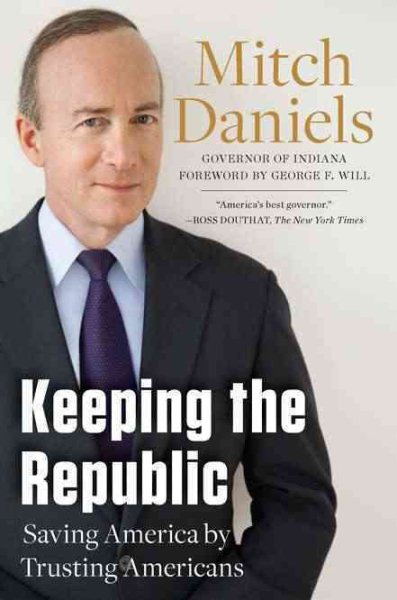 The governor of Indiana identifies key vulnerabilities in government while offering solutions to some of the nation's most pressing problems, drawing on his political successes to explain how to enable a smaller government and greater individual power. Read More
Upon leaving the Constitutional Convention, Benjamin Franklin was asked what sort of government the delegates had created. His reply to the crowd: "A republic, if you can keep it." Now America's most respected governor explains just how close we've come to losing the republic, and how we can restore it to greatness.Indiana Governor Mitch Daniels has been called "the most presidential man in America." He has brought more change to his state in a few years than most see in decades.During his tenure, Daniels turned a $700 million deficit into a billion dollar surplus, balanced Indiana's budget even during the recession, converted its once unattractive business climate into one of the strongest for private sector job growth.The Hoosier state is now a model of good and efficient governance. Its public sector payroll is now the smallest per capita in the nation. And yet services have improved across the board. Even its Bureau of Motor Vehicles -- the ultimate symbol of dysfunctional bureaucracy - has been rated the best in the country.Daniels has done this by focusing on government's core responsibilities, cutting taxes, empowering citizens, and performing what he calls an "old tribal ritual" - spending less money than his state takes in, while distinguishing between skepticism towards big government and hostility towards all government.Unfortunately few politicians have the discipline or courage to follow his lead. And worse, many assume that Americans are too intimidated, gullible or dim-witted to make wise decisions about their health care, mortgages, the education of their kids, and other important issues. The result has been a steady decline in freedom, as elite government experts -- "our benevolent betters", in Daniels' phrase -- try to regulate every aspect of our lives.Daniels bluntly calls our exploding national debt "a survival-level threat to the America we have known." He shows how our underperforming public schools have produced a workforce unprepared to compete with those of other countries and ignorant of the requirements of citizenship in a free society. He lays out the risk of greatly diminished long term prosperity and the loss of our position of world leadership. He warns that we may lose the uniquely American promise of upward mobility for all.But, the good news is that it's not too late to save America. However, real change can't be imposed from above. It has to be what he calls "change that believes in you" -- a belief that Americans, properly informed of the facts, will pull together to make the necessary changes and that they are best- equipped to make the decisions governing their own lives. As he puts it:"I urge great care not to drift into a loss of faith in the American people. We must never yield to the self-fulfilling despair that these problems are immutable, or insurmountable. Americans are still a people born to liberty. Addressed as free-born, autonomous men and women of God-given dignity, they will rise yet again to drive back a mortal enemy." Read Less