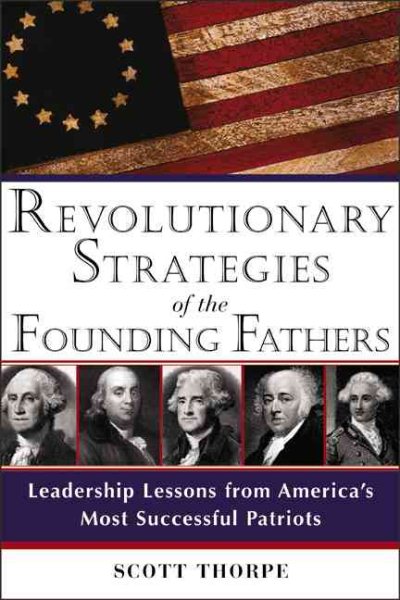 Compares decisions made by America's Founding Fathers with those made by modern businesses to reveal qualities needed for successful business leaders. Read More
Manage change, tackle obstacles and lead others to success...just as our forefathers did!Managing change is the greatest challenge facing businesses today. Executives must innovate in uncertainty, often against great odds. The Revolutionary Strategies of the Founding Fathers shows through the words and deeds of the greatest revolutionaries of all time-from Washington, Madison and Jefferson to Samuel Adams, Ben Franklin and John Adams-how modern managers and leaders can effectively manage and drive change in their organizations.Readers will learn:o Why Benjamin Franklin's most important contribution to victory was being the life of the partyo Why the British ignored the invention of a superior breach-loading rifle that could have doomed Washington's army, and how you can avoid missing out on today's innovationso The tactics of the Constitutional Convention that accelerated consensus on highly controversial issuesEach historical example is followed by a business problem that has actually occurred in modern times, and was resolved in the same fashion as the Founding Fathers using revolutionary principles to overcome the challenges of their day. Read Less

Goodreads reviews for Revolutionary Strategies of the Founding Fathers: Leadership Lessons from America's Most Successful Patriots

How To Think Like Einstein - Simple Ways To Break The Rules...

How to Think Like Einstein: Simple Ways to Break the Rules a...

The Heart Of The Furnace