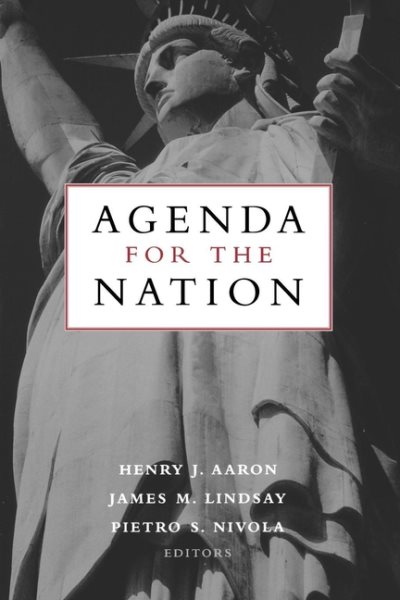 Written by Brookings Institution scholars and a few other think tank denizens, this volume is similar to the last Brookings text of the same name, published in 1968, in that it focuses on long term policy alternatives available to the United States. Fifteen chapters each take on major issues facing the country, offering both descriptions and prescriptions. Topics include the economy and inequality, health and medical care, private pension issues, demographic change, energy and environmental policy, foreign policy, military policy, terrorism, and civil rights and liberties. Annotation (c) Book News, Inc., Portland, OR (booknews.com) Read More
More powerful and affluent today than ever, the United States has promising opportunities to influence the course of history. Yet these prospects are shadowed by significant perils and burdens. In this visionary book, leading scholars from the Brookings Institution and other prominent research organizations and universities analyze the major domestic and foreign policy problems facing the nation over the next five to ten years. The challenges on the domestic front are formidable: assuring fair but affordable access to health care, shoring up retirement income for an aging population, encouraging long-term economic growth, easing the growing pains of an increasingly diverse society, and reconciling energy policies with environmental concerns. In international affairs the central task is to use America's unprecedented power wisely and to protect a homeland that has been revealed as surprisingly vulnerable. Yet efforts must also focus on improving the economic fortunes of poorer countries, expanding trade, and reforming the rules that regulate the flows of capital across national borders. Is the United States government capable of rising to these vast and varied challenges? The concluding chapters of this book offer cautious optimism. While it is often criticized, the American political system is fundamentally resilient and flexible. Ambitious in scope, Agenda for the Nation provides thoughtful, constructive answers to questions of how the U.S. government can effectively serve its citizens and meet its global responsibilities in a world of opportunity and uncertainty. Read Less

Goodreads reviews for Agenda for the Nation

The Future of Academic Medical Centers