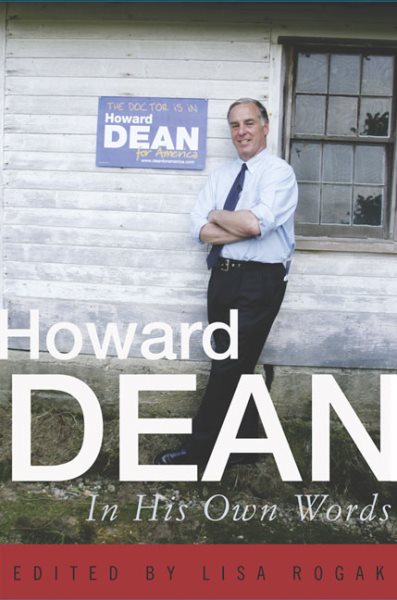 Presidential candidate Howard Dean is taking the country by storm. Find out his position on the issues and why he stands out from the pack of 2004 hopefuls. Read More
"Has anyone really stood up against George Bush and his policies? Don't you think it's time somebody did?"As the 2004 election shifts into primary overdrive, the one candidate who is getting the most ink and air time is former Vermont Governor Howard Dean. His fundraising has skyrocketed past his Democratic opponents and almost a quarter-million people from all fifty states have signed up to volunteer for his campaign.To say Howard Dean is outspoken is something of an understatement. But what is Dean really saying? And why does the media -- and the other Democratic candidates as well as Republicans -- constantly try to paint Dean as an extreme liberal? Howard Dean In His Own Words clearly states the governor's opinions on over 100 issues, from the military to the environment to education. A valuable primer for the politically curious to the most ardent Dean blogger, Howard Dean In His Own Words captures the voice and intellect of one of America's most fascinating political figures.Howard Dean on How to Win the Election:"The way to beat this president is not to be like him. We have to stand up and give the 50 percent of Americans who don't vote a reason to vote."Howard Dean on the Democratic Party:"When I say that a lot of Democrats are more mad at the Democrats than at the Republicans, I get a lot of nods."Howard Dean on Education:"The single most important factor in how a child learns has less to do with the quality of the building, the computers or even the teachers. The most important predictor is the attitude in that child's home toward education. We must involve the parents again."Howard Dean on Being Called a Liberal:"I think it's pathetic that I'm considered the left-wing liberal. It shows just how far to the right this country has lurched." Read Less

Goodreads reviews for Howard Dean In His Own Words

You Have the Power: How to Take Back Our Country and Restore...