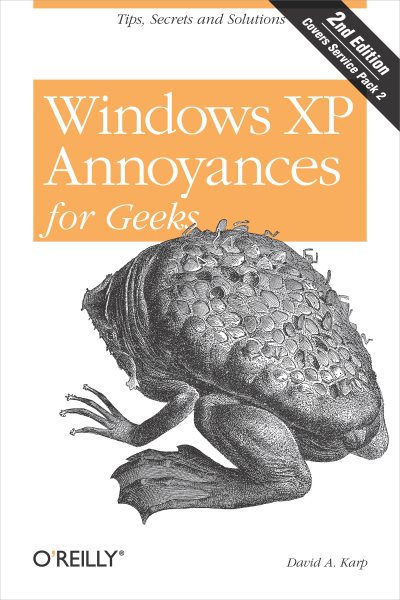 Explains how to configure Windows XP for maximum control and flexibility, work effectively with the Registry, take advantage of the built-in firewall, and troubleshoot problems. Read More
In an ideal world, an operating system would do its job in the background, while you did yours in the foreground. In reality, though, operating systems often get in the way, fouling up the process at the most inopportune times. And Windows XP is no exception.O'Reilly's popular series for customizing and troubleshooting Windows once again comes to the rescue with Windows XP Annoyances for Geeks. Offering dozens of on-target tips, workarounds, and warnings, Windows XP Annoyances for Geeks allows users to improve their overall experience with the Windows XP operating system in every way possible.You'll learn how to use the Registry Editor; how to customize the interface beyond Microsoft's own intentions; and how to master Windows' built-in networking capabilities, including advanced technologies such as Internet Connection sharing, Remote Desktop sharing, and virtual private networking. And now, with this updated edition, you can also expect detailed coverage of the newly released Service Pack 2 (SP2) technology.SP2 is designed to make your work with the Windows XP operating system even easier and safer by providing superior protection against viruses, hackers, and worms. Among the core SP2 components covered in Windows XP Annoyances for Geeks are Windows Firewall, Pop-up Blocker for Internet Explorer, and the new Windows Security Center.David Karp, veteran author of several titles in the Windows Annoyances series, is behind the wheel of this comprehensive guide, as well. Karp points out numerous SP2-related quirks and unaccountable behaviors that are guaranteed to increase your level of perplexity and frustration. By recognizing these shortcomings, Windows XP Annoyances for Geeks arms you with the knowledge to overcome them.Karp leaves no stone unturned in providing the ultimate resource for the ever-expanding Windows XP market. As a result, you'll be able to seize complete control of the Windows XP operating system--instead of the other way around. Read Less

Speaking of Sadness: Depression, Disconnection, and the Mean...

Speaking of Sadness: Depression, Disconnection, and the Mean...