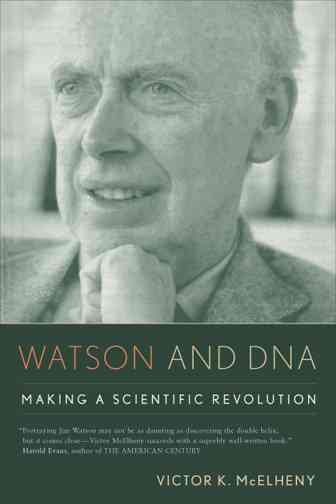 A riveting portrait of the man behind the greatest scientific achievement of our time: the discovery of the structure of DNA and the creation of modern molecular biology. Read More
From the discovery of the double helix to the imminent sequencing of the human genome, James Watson has been at dead center in this great biological revolution. Since the very morning after his Nobel Prize-winning discovery, he has continued to ride the scientific supernova that he and his collaborator, Francis Crick, detonated in 1953. Targeting the big questions, mobilizing the best talent, writing the textbook that defined molecular biology, energizing the "war on cancer," he has served as a prime mover of the DNA era. Now, a distinguished science reporter who has known him for decades and worked for him for four years, with unique access to the scientists who know Watson best, has written an unauthorized, non-reverential account of this extraordinaryman. While Watson is probably the most influential scientist in the last half-century, he is also one of the most controversial. From the ruthless competition in the race to identify the structure of DNA, to clashes with ethicists over charged issues in genetics, to a chorus of Bronx cheers for his recent memoir, Watson has left a wake of detractors as well as fans. Until now, Watson has managed to keep control over his legend, fending off aspiring biographers with his own memoirs. Victor McElheny gets behind this invented persona, bringing us close to the relentless genius who triggered and sustained a revolution in science that affects us all.Shares the story of the Nobel Prize-winning scientist, covering his role in the race to identify the structure of DNA, his clashes with ethicists over genetics issues, and his own memoirs. Read Less

Goodreads reviews for Watson and DNA: Making a Scientific Revolution

Insisting On the Impossible : The Life of Edwin Land

Drawing the Map of Life: Inside the Human Genome Project (A...

Drawing the Map of Life: Inside the Human Genome Project (A...