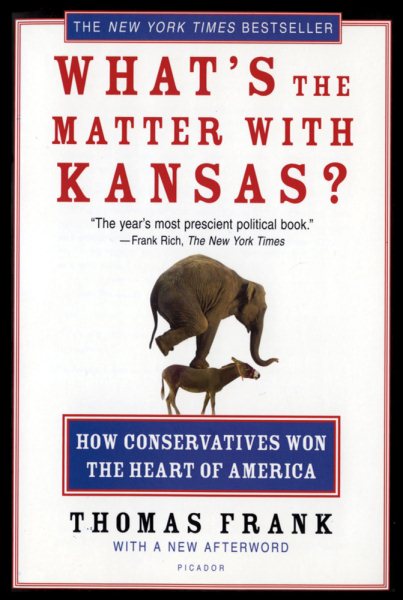 Reveals how conservatism became the preferred national political ideology, exploring the origins of this philosophy in the upper classes and tracing its recent popularity within the middle class. Read More
With a New Afterword by the AuthorThe New York Times bestseller, praised as "hilariously funny . . . the only way to understand why so many Americans have decided to vote against their own economic and political interests" (Molly Ivins)Hailed as "dazzlingly insightful and wonderfully sardonic" (Chicago Tribune), "very funny and very painful" (San Francisco Chronicle), and "in a different league from most political books" (The New York Observer), What's the Matter with Kansas? unravels the great political mystery of our day: Why do so many Americans vote against their economic and social interests? With his acclaimed wit and acuity, Thomas Frank answers the riddle by examining his home state, Kansas-a place once famous for its radicalism that now ranks among the nation's most eager participants in the culture wars. Charting what he calls the "thirty-year backlash"-the popular revolt against a supposedly liberal establishment-Frank reveals how conservatism, once a marker of class privilege, became the creed of millions of ordinary Americans.A brilliant analysis-and funny to boot-What's the Matter with Kansas? is a vivid portrait of an upside-down world where blue-collar patriots recite the Pledge while they strangle their life chances; where small farmers cast their votes for a Wall Street order that will eventually push them off their land; and where a group of frat boys, lawyers, and CEOs has managed to convince the country that it speaks on behalf of the People. Read Less

Goodreads reviews for What's the Matter with Kansas?: How Conservatives Won the Heart of America

Listen, Liberal: Or, What Ever Happened to the Party of the...

What's the Matter with Kansas? How Conservatives Won the Hea...