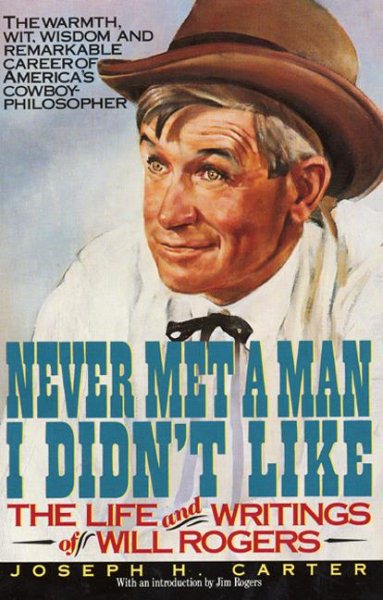 Tells the story of the American humorist's life and his rise from Oklahoma cowboy to international star, and presents a collection of his witticisms Read More
Will Rogers was America. Part Cherokee Indian and former cowboy, he captivated audiences around the world with sparkling gems of wisdom cloaked in gentle and uproarious country wit and astonishing rope tricks. His colorful life recently inspired a commercially successful and critically acclaimed Broadway musical -- winner of 6 Tony Awards. His words are as entertaining, inspiring and revelant today as they ever were. A simple, plain-spoken man, he was the voice of a nation during the '20s and '30s. Movie star, vaudeville headliner, radio commentator, his views and observations were syndicated daily and weekly in over 600 newspapers across the country.Here is the essential Will Rogers -- the story of his remarkable career, from Oklahoma "cowpuncher" to international star . . . and the warm, knowing and hilarious philosophies of the man embodied the heart and soul of the nation. Read Less

Goodreads reviews for Never Met a Man I Didn't Like: The Life and Writings of Will Rogers

ACCEPTANCE OF THE STATUE OF WILL ROGERS PRESENTED BY THE STA...