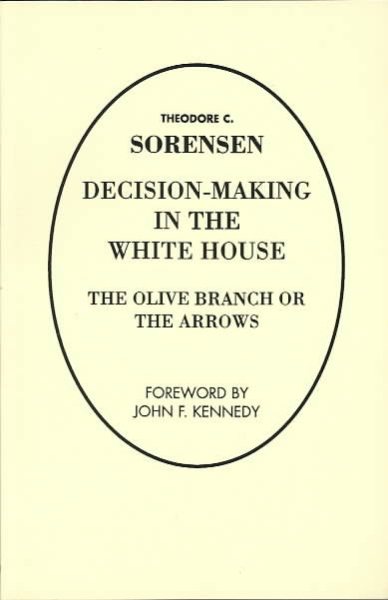 Faced with divided advisers, limited options, contradictory evidence, and the profound global conseq... Read More
Faced with divided advisers, limited options, contradictory evidence, and the profound global consequences of their choices, how do presidents reach a decision in a time of crisis? As a speechwriter and close adviser to John F. Kennedy, Ted Sorensen, whom the New York Times referred to as Kennedy's "brilliant alter ego," drafted many of the president's key public statements and was a participant in some of the toughest decisions made by an American president. In the shadow of potential nuclear war, John F. Kennedy had to weigh, with extreme, sometimes excruciating delicacy, his options as he responded to the Cuban Missile Crisis, the construction of the Berlin Wall, and other domestic and foreign crises. In these famous lectures, Sorensen draws on his firsthand experiences in the Kennedy White House to analyze the political and personal dimensions of presidential decision-making and the necessary attributes of an effective leader. In particular, Sorensen emphasizes knowing and remaining open to all options; the need to make an informed, prudent, and resolute choice; the importance of avoiding any appearance of deception; and the necessity of understanding decisions made by past presidents and recognizing the limitations of presidential power.This edition includes a new preface by the author, comparing the very different decision-making styles of George W. Bush and John F. Kennedy. Sorensen argues that Bush's failure to seek support from the international community, explore all his options, and fully investigate the facts presented to him have contributed to U.S. difficulties in Iraq. In light of the findings of the 9/11 Commission and the numerous accounts of George W. Bush's decision to go to war in Iraq, Sorensen's observations offer timely insights and analysis as the United States and the American president confront a new set of challenges. Read Less

Goodreads reviews for Decision Making in the White House

Decision-Making in the White House: The Olive Branch or the...

DECISION-MAKING IN THE WHITE HOUSE: The Olive Branch or the...

Let the Word Go Forth: The Speeches, Statements, and Writing...