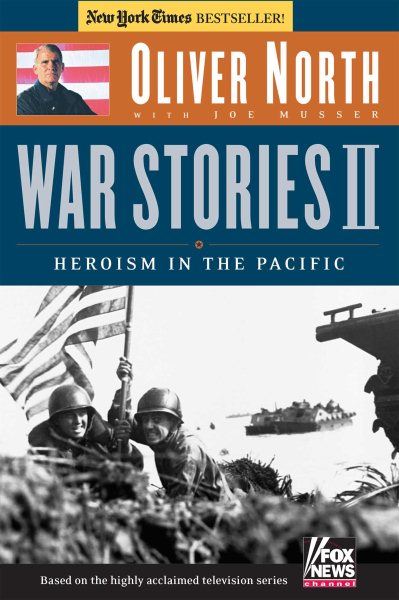 The author, a decorated war hero and host of a Fox News Channel series on military history, collects great war stories told by the men who lived through the battles of Bataan, Oki Nawa, Iwa Jima, Midway, Bloody Tarawa, and the Doolittle Raid, among other World War II battles. Read More
When it comes to sheer savagery endured by the American fighting man, few combat theaters could match the Pacific in WorldWar II: the sodden malarial and Japanese infested jungles of New Guinea and Guadalcanal, the kamikaze pilots for whom death was no deterrent, and the blood-soaked beaches taken by island-hopping Marines. Here, in their own words, are the compelling stories of American soldiers, sailors, airmen, and Marines, as told to decorated combat veteran Lt. Colonel Oliver North.In War Stories II: Heroism in the Pacific, North reveals:Eyewitness testimony from Pearl Harbor veterans that Japanese Zeros did not fire the first shots: our defending forces did&#151;with startling resultsThe living hell of the Bataan Death March and the daring rescue of the Ghosts of BataanThe big battles: the Coral Sea, Midway, Guadalcanal, the Marianas, LeyteHow Americans cracked the secret Japanese JN-25 code and changed the course of the warWar Stories II: Heroism in the Pacific is the essential book for every veteran of the war, every student of military history, and every American who is inspired by the courage and sacrifice of the Greatest Generation in one of its greatest moments. Read Less

Goodreads reviews for War Stories II: Heroism in the Pacific