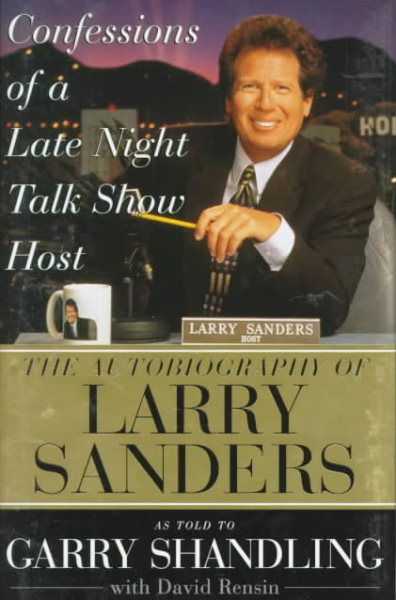 The popular comedian and star of "The Larry Sanders Show" presents the tell-all memoirs of his fictional alter ego Larry Sanders, a slightly neurotic Hollywood talk show host Read More
With the wit and charm and wit that have made him one of America's most beloved, and now most sorely missed, television personalities, Larry Sanders tells here the story behind the man -- Larry -- from his emotionally barren beginnings in Mound, Minnesota, to his ten-year run as the man millions went to bed with every night. (He had a very big bed.) Confessions of a Late Night Talk Show Host is a Hollywood autobiography like no other because it reveals all -- the loves and losses, the pain and joy, the shrinks and doctors -- and it is uproariously funny. Larry Sanders has written a book that will have the same ten-year run that his show did. Larry Sanders is no ordinary man, and this book will show America and the world how very different he is. Fueled by an enormous need to be loved and gifted with a talent beyond even his own, Sanders has risen to the top of his field -- and dropped -- while retaining all of his dignity and modesty. As he says on the first page of his story, "I'm famous. Actually, I'm very, very, very famous." Sanders's story is laced with the names (and some of the faces) of the thousands of celebrities who have sought his attention for a decade -- and Sanders tells the world what he thinks of all of them, even if it hurts his own feelings. Confessions of a Late Night Talk Show Host is a Hollywood tell-all that will forever change the nature of this kind of book. While Geraldo Rivera used his sexual exploits to shamelessly promote his book, Sanders uses his conquests of thousands of women to illustrate his compassion and grace. "If it sells, it sells," Sanders says. "There was never a hidden agenda." While Roseanne used her book to promote her many personalities, Sanders's book shows how a straight-shooter can not only survive but thrive in Hollywood. Most of all, Sanders, in truthfully disclosing all aspects of his life and those of people he has never met, hopes to heal and entertain. Sanders has written a wonderfully hilarious book that will make some of his fans wish he were back. Read Less

Don't Give Up, Don't Give in: Lessons from an Extraordinary...