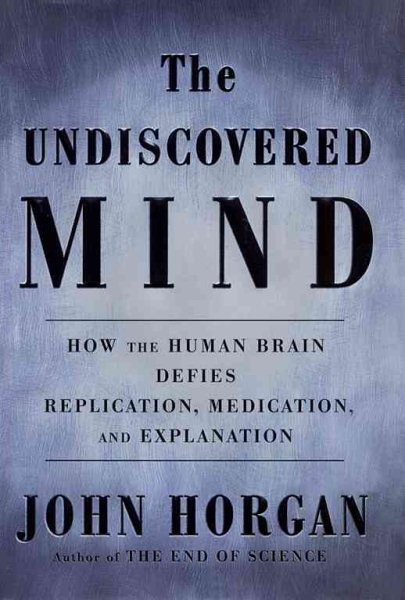 A respected journalist explores the fields of science that try to explain the mysteries of the human mind, arguing that science has done little to plumb the depths of our minds and cannot ever rationally explain all of human behavior Read More
In his acclaimed book The End of Science, John Horgan ignited a firestorm of controversy about the limits of knowledge in a wide range of sciences. Now in The Undiscovered Mind he focuses on the single most important scientific enterprise of all -- the effort to understand the human mind -- and exposes a world of minor and doubtful achievement. The science of the mind has irresistible allure because it is about us, not atoms or electricity or planets. For this reason Horgan foresees that, unlike physics or cosmology or biology, it is the one science that will forever demand our attention, that ultimately can have no end. Only recently has the mind become science's busiest line of inquiry. As the Decade of the Brain proclaimed by President Bush draws to a close, a huge research industry has built up around attempts to medicate, replicate, and finally explain the human brain. Scientists hope to solve the riddle of consciousness, to vanquish mental illness, and even to reinvent human nature. Horgan scrutinizes this trend as he takes us inside laboratories, hospitals, and universities to meet neuroscientists, Freudian analysts, electroshock therapists, behavioral geneticists, evolutionary psychologists, artificial intelligence engineers, and philosophers of consciousness. He looks into the persistent explanatory gap between mind and body that Socrates pondered and shows that it has not been bridged. He investigates what he calls the Humpty Dumpty dilemma, the fact that neuroscientists can break the brain and mind into pieces but cannot put the pieces back together again. He presents evidence that the placebo effect is the primary ingredient of psychotherapy, Prozac, and other treatments for mental disorders. We visit with the robot Cog at MIT, whose most human achievement is that he unnervingly watches his visitors move around the room -- Star Trek's Commander Data would find him very dull company. As Horgan shows, the mystery of human consciousness, of why and how we think, remains so impregnable that to expect the attempts of scientific method and technology to penetrate it anytime soon is absurd. Full of fascinating interviews and research, The Undiscovered Mind is a blistering critical tour of every facet of "mind-science." Horgan concludes by destroying the myth of the "scientific savior" and by laying bare the dangers posed by our desire for a final theory of the mind. Nevertheless, he still has the curiosity to try on a Visual/Auditory Relaxation and Sedation contraption with goggles and headphones when offered the opportunity of an "altered state" at a consciousness conference in Tucson. The final "search for an epiphany" is vintage Horgan, both delightfully witty and arrestingly profound. Horgan is one of the most influential journalists in the United States today. His vision of mind-science will continue to infuriate many inside and outside the scientific establishment. It will raise sometimes difficult and even painful questions for those who have benefited from mind science's products -- whether Prozac, or psychoanalysis, or simply more challenging chess-playing software. But these questions are at the heart of the most popular science being done now. This is a shrewd, entertaining, aud necessary book about the universe's ultimate enigma: the undiscovered mind. Read Less

Goodreads reviews for The Undiscovered Mind: How the Human Brain Defies Replication, Medication, and Explanation

The End of War

The Psychology of Terrorism (Political Violence)

The End Of Science: Facing The Limits Of Knowledge In The Tw...