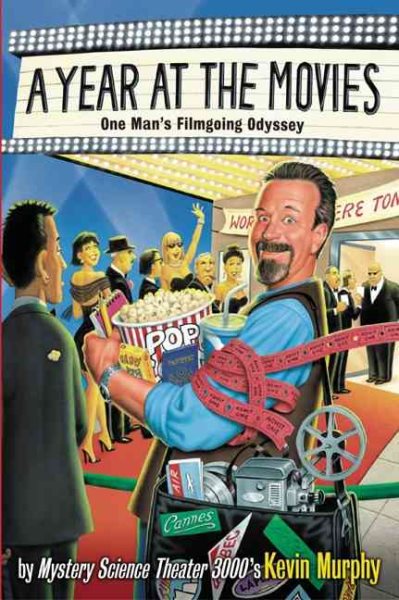 The author relates his year-long exploration of the moviegoing experience, describing his impressions of films, theaters, and audiences as he went to the movies every day for one year. Read More
For some of us, moviegoing is an occasional pleasure. Kevin Murphy made it his obsession, and he did it for you.Mr. Murphy, known to legions of fans as Tom Servo on the legendary TV series Mystery Science Theater 3000, went to the movies every day for a year. That&#39;s every single day, people. For a whole fricken&#39; year. And not only did he endure, he prevailed -- for this is the hilarious, poignant, fascinating journal of his adventures: the first book about the movies from the audience&#39;s point of view.Kevin went to the multiplex, sure. But he didn&#39;t stop there. He found the world&#39;s smallest commercial movie theater. Another one made completely of ice. Checked out flicks in a tin-roofed hut in the South Pacific. Tooled across the desert from drive-in to drive-in in a groovy convertible. Lived for a week solely on theater food. Took six different women to the same date movie. Dressed up as a nun for the Sing-Along Sound of Music in London. Sneaked into the Cannes and Sundance film festivals. Smuggled an entire Thanksgiving dinner into a movie theater. And saw hundreds of films, from the Arctic Circle to the Equator, from the sublime to the unspeakable. Come along on a joyous global celebration of the cinema with a man on a mission -- to spend A Year at the Movies. Read Less

Goodreads reviews for A Year at the Movies: One Man's Filmgoing Odyssey