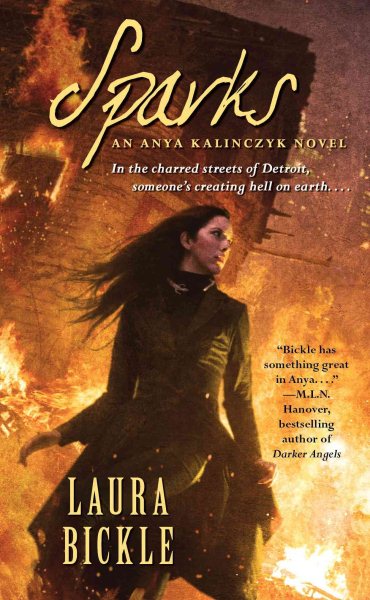 Psychic medium and arson investigator Anya Kalinczyk's new case involving spontaneous human combustions is linked to a celebrity psychic who preys on Detroit's poor, promising miracles for money in an attempt to collect spirits. Original. 75,000 first printing. Read More
WITHOUT A TRACEAnya Kalinczyk is the rarest type of psychic medium, a Lantern, who holds down a day job as an arson investigator with the Detroit Fire Department&;while working 24/7 to exterminate malicious spirits haunting a city plagued by unemployment and despair. Along with her inseparable salamander familiar, Sparky, Anya has seen, and even survived, all manner of fiery hell&;but her newest case sparks suspicions of a bizarre phenomenon that no one but her eccentric team of ghost hunters might believe: spontaneous human combustion.After fire consumes the home of elderly Jasper Bernard, Anya is stunned to discover his remains&;or, more precisely, a lack of them; even the fiercest fires leave some trace of their victims&;and she is sure this was no naturally occurring blaze. Soon she&;s unearthed a connection to a celebrity psychic who preys on Detroit&;s poor, promising miracles for money. But Hope Solomon wants more&;she&;s collecting spirits, and in a frantic race against time, Anya will face down an evil adversary who threatens her fragile relationship with her lover, her beloved Sparky&;s freshly hatched newts, and the wandering souls of the entire city Read Less

What the Dog Saw: And Other Adventures