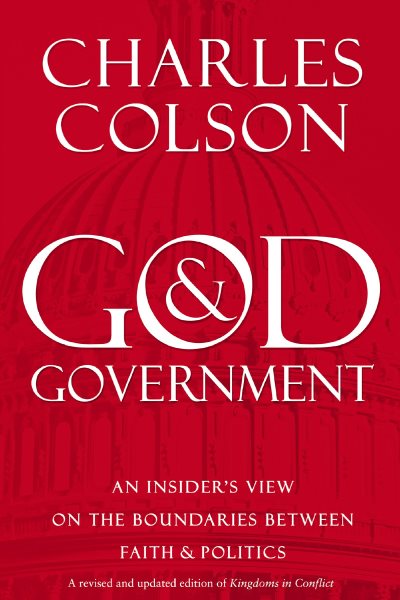 How should Christians live their faith in the public arena? This updated edition of Charles Colson’s blockbuster Kingdoms in Conflict includes a new foreword, new stories and recent court cases in place of older examples, and a revised opening that depicts today’s current international climate marked by terrorism and the conflict with radical Islam. Read More
How should Christians live their faith in the public arena?Twenty years ago, the first edition of Chuck Colson’s Kingdoms in Conflict became a bestseller, a must-read for people interested in politics and the relationship between church and state. Now, with a passion for truth and moved by the urgency of the times we live in, Colson has written God and Government, re-voicing his powerful and enduring message for our post-9/11 world.In an era when Christianity is being attacked from every side—books being written charging Christians with being theocrats and trying to impose their views on an unwilling culture—what is the message of the Christian church? What does the Bible say, and what do we learn from history about the proper relationship between faith and culture? Appealing to scripture, reason, and history, this book tackles society’s most pressing and divisive issues. New stories and examples reflect the realities of today, from the clash with radical Islam to the deep division between “reds” and “blues.” In an era of angry finger-pointing, Colson furnishes a unique insider’s perspective that can’t be pigeonholed as either “religious right” or “religious left.”Whatever your political or religious stance, this book will give you a different understanding of Christianity. If you're a Christian, it will help you to both examine and defend your faith. If you’ve been critical of the new religious right, you’ll be shocked at what you learn. Probing both secular and religious values, God and Government critiques each fairly, sides with neither, and offers a hopeful, fair-minded perspective that is sorely needed in today’s hyper-charged atmosphere. Read Less

The Christian in Today's Culture: Developing A Christian Wor...

The Problem of Evil (Developing a Christian Worldview)