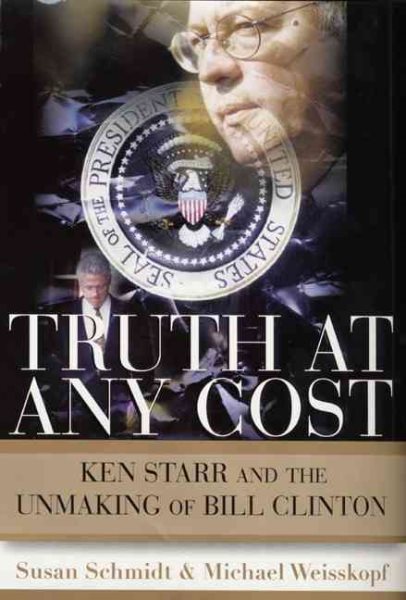 Analyzes Ken Starr's impeachment probe Read More
What drove the man who nearly toppled a presidency and forced the most serious constitutional crisis in twenty-five years? Conventional wisdom portrays Independent Counsel Kenneth Starr as a right-wing religious zealot out to destroy the president, and Bill Clinton as a victim whose only "crime" was a private indiscretion.In Truth at Any Cost, two of America's preeminent investigative reporters, Susan Schmidt and Michael Weisskopf, reveal for the first time what really went on inside the Office of the Independent Counsel. The book details Ken Starr's motivations, his inner struggles, and his anguish as he comes under attack by Clinton's ferocious partisans. It goes behind the locked doors of Starr's office as prosecutors make the fateful decision to pursue the case against Clinton for lying to conceal his embarrassing affair with an intern half his age. Schmidt and Weisskopf lay bare what happened on the night when FBI agents first confronted Monica Lewinsky, how the White House launched a political jihad to survive, and how Starr's team agonized over Clinton's fate.For four years, the bland, smiling man behind the investigation of President Clinton remained a mystery, both to many who supported him and to those who feared him. Until now. Truth at Any Cost shows Ken Starr in a new light: as an upright but politically naive prosecutor who withstood public vilification to pursue the truth--including what he and his deputies saw as the president's attempts to use the power of his office to thwart a legitimate inquiry. Here is an unblinking look at the battle between Starr's legal absolutism and Clinton's chronic evasions. It examines Starr's impassioned quest to bring the president to justice, and explains how Starr eventually became a casualty of his own mission, leaving the arena as bloodied as the man he had pursued. Read Less

Goodreads reviews for Truth at Any Cost: Ken Starr and the Unmaking of Bill Clinton

Salt Runs in My Blood