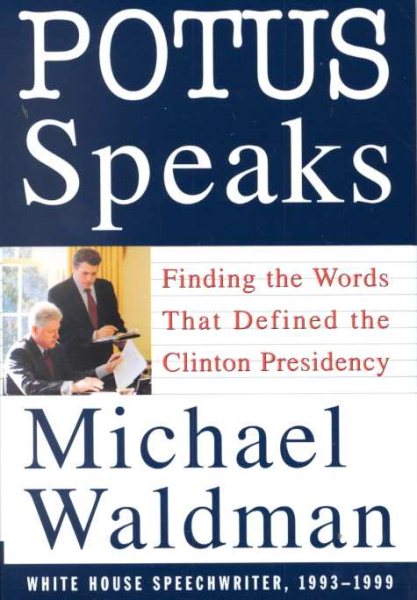 Clinton's principal speech writer, who edited or wrote nearly two thousand addresses for the President, shares his insights into the major battles of the Clinton presidency. Read More
POTUS stands for "President of the United States." Michael Waldman served as a special assistant and then chief speechwriter to Bill Clinton from 1992 to 1999. During that time, he worked closely with the president to write or edit nearly two thousand speeches, including four State of the Union addresses and two inaugural addresses. More than rhetoric, these speeches are where policy, politics, and presidential personality come together. With four twenty-four-hour cable news channels and the Internet competing for stories, every word a president speaks can be instantly transmitted around the world. This constant media attention has transformed the ways the White House works and a president leads. POTUS Speaks takes us behind the world's most powerful bully pulpit to show us what it is like to govern in the eye of this media hurricane. It describes life within the White House gates -- including the dramatic, sometimes humorous struggles to shape the message, control policy, and win the battle for public opinion. Waldman tells the stories behind the words at key moments in Clinton's presidency -- his speeches on the economy and trade, his calls for campaign finance reform, his budget showdowns with the GOP Congress. Waldman recounts how Clinton's dramatic 1998 State of the Union address -- a speech credited with helping to save his presidency -- came together. He shows how policymakers struggled to contain a worldwide financial crisis even as the press and the public were obsessed with scandal. Readers meet the players, from a president deeply involved in the process of crafting his speeches to the young, sometimes anonymous policy aides who guided the government. The Bill Clinton who emerges in Waldman's candid account is not only a successful president but, in many and surprising ways, an important one. A man in love with history, obsessed with politics and policy, and highly attuned to the power of words, Clinton used the bully pulpit relentlessly. We see the sources of his uncanny ability to connect with the public. We see how he changed the presidency, using his speeches and executive actions to address long-ignored domestic issues. And we see how he worked to frame a new role for a smaller but active government. POTUS Speaks is the first contemporary history of the two terms of the Clinton presidency to be written by a key participant. It is a major contribution to the consideration of Clinton's legacy. Read Less

Goodreads reviews for POTUS Speaks: Finding the Words That Defined the Clinton Presidency

My Fellow Americans : The Most Important Speeches of America...

The Fight to Vote

Who Robbed America?: A Citizen's Guide to the S&L Scandal