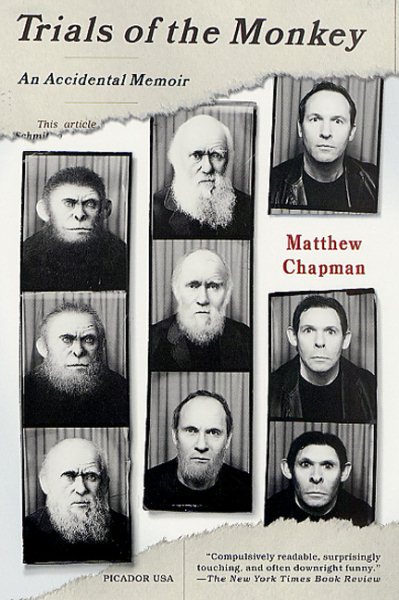 The great-great grandson of Charles Darwin leaves his high-pressure job as a Hollywood screenwriter to journey to Dayton, Tennessee, to revisit the site of the Scopes Trial that challenged the theory of evolution, an odyssey that is transformed into a exploration of faith, science, and his own life. Reprint. 25,000 first printing. Read More
"When Darwin called his second book The Descent of Man instead of The Ascent of Man he was thinking of his progeny." So declares Darwin's great-great grandson Matthew Chapman as he leaves behind his stressful career as a Hollywood screenwriter and travels to Dayton, Tennessee where in 1925 creationist opposition to the teaching of evolution in schools was played out in a famous legal drama, the Scopes Monkey Trial.The purpose of this journey is to see if opinions have changed in the seventy- five intervening years. A defiant atheist, Chapman is confronted not only by the fundamentalist beliefs that continue to banish the theory of evolution but by his own spiritual malaise as the outward journey becomes an inward quest, a tragicomic "accidental memoir"."First there was Charles Darwin, two yards long and nobody's fool. Then there was his son, my great-grandfather, Sir Francis Darwin, an eminent botanist. Then came my grandmother Frances, a modest poet who spent a considerable amount of time in rest-homes for depression From her issued my beloved mother, Clare, who was extremely short, failed to complete medical school, and eventually became an alcoholic. Then we get down to me. I'm in the movie business."Trials of the Monkey combines travel writing and reportage, as Chapman records his encounters in the South, with history and the accidental memoir of a man full of mid-life doubts in a genre-breaking first book that is darkly funny, provocative and poignant. Read Less

Goodreads reviews for Trials of the Monkey: An Accidental Memoir

Trials of the Monkey: An Accidental Memoir

The burning glass;: A novel,

Design in liberal learning (The Jossey-Bass series in higher...