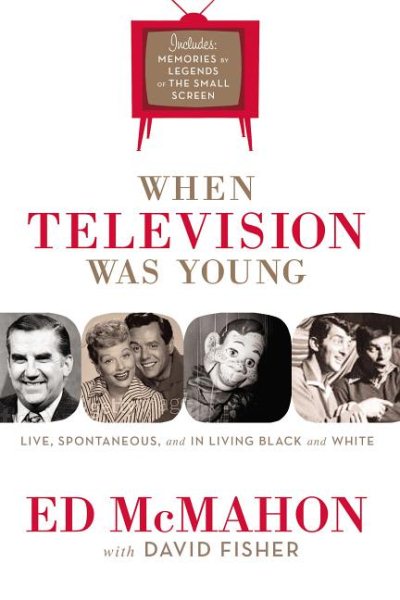 Ed McMahon started his television career in Philadelphia and moved to New York in 1958 to appear on Who Do You Trust with Johnny Carson. Ed has interviewed writers, producers, cameramen, and stars such as Annette Funicello, Dick Clark, Andy Griffith, Art Linkletter, Gale Storm, Barbara Billingsley, Walter Cronkite, Jerry Mathers, Soupy Sales, Ron Howard, Merv Griffin, and more to provide not just a history of early television, but a history told by those who made it happen. Read More
When television was young . . .Legendary movie producer Darryl Zanuck declared, "People will soon get tired of staring at a plywood box every night.Before 5:30, there were only test patterns. Howdy Doody was the first show of the day.CBS agreed to put I Love Lucy on film only if Desi and Lucy paid part of the production fee. In return, CBS gave them ownership of the shows, including the right to rerun it forever.Kukla, Fran, and Ollie was the first network show broadcast in color.50,000 fans showed up in a New Orleans department store to meet Hopalong Cassidy.Movie studios would not let motion icture stars appear on television for fear that if people saw the stars on TV, they wouldn't go to the movies.Filled with fascinating stories, When Television Was Young is a hilarious, entertaining, behind-the-scenes look at the world of the small screen. Read Less

Goodreads reviews for When Television Was Young: The Inside Story With Memories by Legends of the Small Screen

Here's Johnny!: My Memories of Johnny Carson, the Tonight Sh...

For Laughing Out Loud: My Life and Good Times