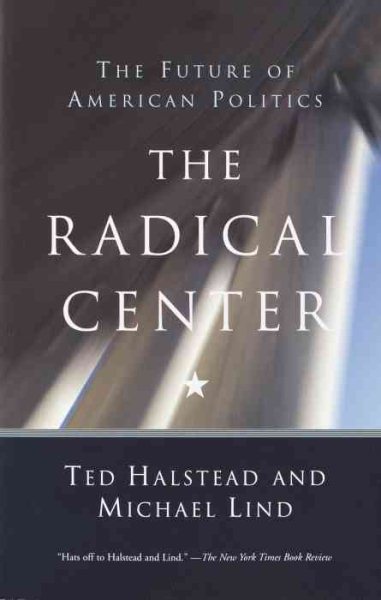 Two members of the New America Foundation introduce a sweeping manifesto for the reform of American political, economic, and social policies to meet the interests and needs of the vast numbers of the new, centrist, majority of Americans, calling for a new tax system, the end of the two-party system, and a new approach to education, family, and community. Reprint. 17,500 first printing. Read More
Record numbers of Americans describe themselves as “independents” and reject the conventional agendas of Left and Right. In this widely acclaimed book, Ted Halstead and Michael Lind explain why today’s ideologies and institutions are so ill-suited to the Information Age, and offer a groundbreaking blueprint for updating all sectors of America society. Taking on partisans and experts on both sides of the political divide, they propose far-reaching reforms for the way we provide health and retirement security, collect taxes, organize elections, enforce civil rights, and educate our children.Twice before the United States has dramatically reconfigured itself, shifting from an agrarian to an industrial society after the Civil War and successfully adapting to the massive technological and demographic changes of the early twentieth century during the New Deal era. Uniting a sweeping historical vision with bold policy proposals, The Radical Center shows us how to reinvent our nation once again so that all Americans can reap the benefits of the Information Age. Read Less

Goodreads reviews for The Radical Center: The Future of American Politics

Vietnam: The Necessary War: A Reinterpretation of America's...

The Next American Nation: The New Nationalism And The Fourth...

NEXT AMERICAN NATION: The New Nationalism and the Fourth Ame...