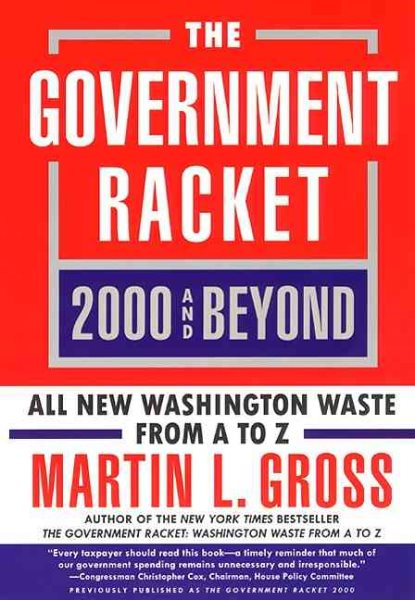 Presents a updated new edition to the bestselling study that reveals the wasteful financial practices of America's elected officials, discussing the mishandling of welfare subsidies to the poor, coverup accounting techniques, bad loans, and other catastrophic policies. Original. Read More
<p>In 1992, Martin L. Gross shocked the nation with his New York Times bestseller , The Government Racket: Washington Waste A to Z, after whcih he testified before Congress five times on hidden catastrophic waste. Now he has returned to the scene of the crime and found that things have gotten even worse.</p><p>He shows how the claim that the "era of a big government is over" is a blatant lie. With 2 percent inflation, federal spending rose 7 percent and is now more than $2 trillion annually. The Social Security fund is empty and $1.2 trillion in debt, while its FCA surplus is squandered on everything except the aged.</p><p>In this provacative follow-up volume, the author outlines an encylcopedia of new wastem shows what happened to his previous suggestions to cut costs, and lays out a blueprint for governent reform that could stop Washington&#39;s dysfunstional behavoir . In thirty-six chapters he gives scores of examples of giant new waste and abuse, including:</p><p><ul><li>Duplication and overlap cost us billions in 154 different failing job-training programs and 127 different teenage bureaucracies, nine alone in Department of Justice.</li><li> Billions are rountinely wasted on ludicrious Washinton projects, from golf courses for congressman to large cash pensions for hyperactive children.</li><li>While the taxpayer pays, Washinton subsizes General Motors, Intel, Pillsbury, and scores of gaint firms to the tune of $75 billion a year.</li><li>The Defense Department regualry flies members of Congress around the world, with spouses, for freebie holidays on liquor-loaded planes. </li></ul> </p> Read Less

Goodreads reviews for Government Racket, The

The End of Sanity: Social and Cultural Madness in America

National Suicide: How Washington Is Destroying the American...