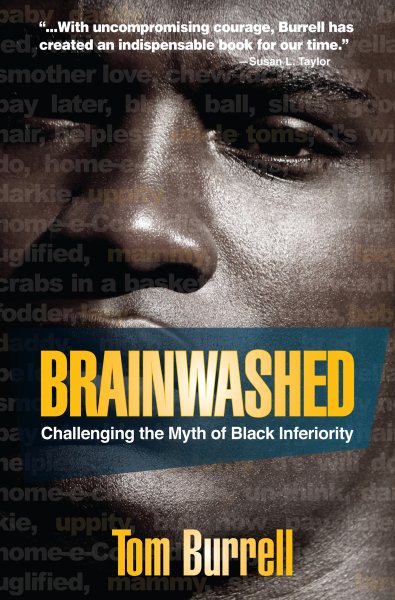 Discusses the subversive perpetuation of inferiority among African Americans, explaning how history and popular culture promotes this myth, and calls for action within the black community to reject self-hatred and media distortions. Read More
"Black people are not dark-skinned white people," says advertising visionary Tom Burrell. In fact, they are much more. They are survivors of the Middle Passage and centuries of humiliation and deprivation, who have excelled against the odds, constantly making a way out of "No way!" At this pivotal point in history, the idea of black inferiority should have had a "Going-Out-of-Business Sale." After all, Barack Obama has reached America’s Promised Land.Yet, as Brainwashed: Challenging the Myth of Black Inferiority testifies, too many in black America are still wandering in the wilderness. In this powerful examination of "the greatest propaganda campaign of all time"—the masterful marketing of black inferiority, aka the BI Complex—Burrell poses ten disturbing questions that will make black people look in the mirror and ask why, nearly 150 years after the Emancipation Proclamation, so many blacks still think and act like slaves. Burrell’s acute awareness of the power of words and images to shift, shape, and change the collective consciousness has led him to connect the contemporary and historical dots that have brought us to this crossroads.Brainwashed is not a reprimand—it is a call to action. It demands that we question our self-defeating attitudes and behaviors. Racism is not the issue; how we respond to media distortions and programmed self-hatred is the issue. It’s time to reverse the BI campaign with a globally based initiative that harnesses the power of new media and the wisdom of intergenerational coalitions. Provocative and powerful, Brainwashed dares to expose the wounds so that we, at last, can heal. Read Less

Goodreads reviews for Brainwashed: Challenging the Myth of Black Inferiority

Collection for a King Old Master Paintings from the Dulwich...

By Waterfield, Giles (Introduction by)

The Lorelei, and other poems with prose settings