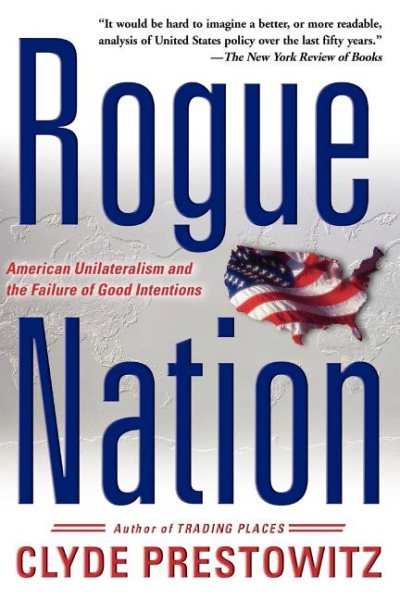 It would be hard to imagine a better, or more readable, analysis of United States policy over the last fifty years than Clyde Prestowitz's Rogue Nation. -Brian Urquhart, The New York Review of Books Read More
America's democratic ideals have long been the hope of the world, but our allies increasingly see us as abandoning those ideals. It's not hard to understand why. In the months before 9/11, the United States walked away from a number of international treaties including the Kyoto Accord. After the attack, the United States turned a cold shoulder to NATO's offers to assist with the invasion of Afghanistan, unilaterally terminated the ABM treaty, and actively opposed the creation of an International Criminal Court. Then came the war on Iraq, begun despite the clear refusal of the United Nations Security Council to authorize an invasion.Obsessed with our own immediate military and economic security, we now deem institutions like NATO and the UN irrelevant. We have abandoned containment for a policy of preventive attacks on potential threats. More and more, we act alone, with little regard for the needs and goals of other nations.Rogue Nation is not an argument against American dominance or the exercise of American power. It's an argument against stupidity, arrogance, and ignorance in the exercise of power. Prestowitz explores the historical roots of the unilateral impulse and shows how it now influences every important area of American foreign policy. Even now, when the need for multilateral action has never been greater, we continue to act contrary to international law, custom, and our own best interests. Read Less

Goodreads reviews for Rogue Nation: American Unilateralism And The Failure Of Good Intentions

Three Billion New Capitalists: The Great Shift of Wealth and...

Rogue Nation: American Unilateralism And The Failure Of Good...