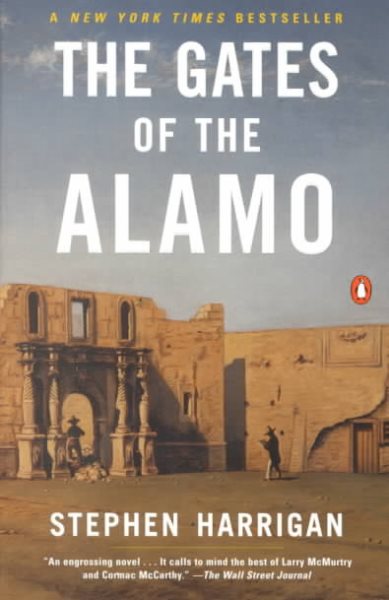 A fictional chronicle centered around the fall of the Alamo provides a dramatic re-creation of an event that shaped the history and identity of Texas. Read More
A huge, riveting, deeply imagined novel about the siege and fall of the Alamo in 1836--an event that formed the consciousness of Texas and that resonates through American history--The Gates of the Alamo follows the lives of three people whose fates become bound to the now-fabled Texas fort: Edmund McGowan, a proud and gifted naturalist whose life's work is threatened by the war against Mexico; the resourceful, widowed innkeeper Mary Mott; and her sixteen-year-old son, Terrell, whose first shattering experience with love leads him instead to war, and into the crucible of the Alamo. The story unfolds with vivid immediacy and describes the pivotal battle from the perspective of the Mexican attackers as well as the American defenders. Filled with dramatic scenes, and abounding in fictional and historical personalities--among them James Bowie, David Crockett, William Travis, and General Santa Anna--The Gates of the Alamo enfolds us in history and, through its remarkable and passionate storytelling, allows us to participate at last in an American legend. Read Less

Goodreads reviews for The Gates of the Alamo

The Gates of the Alamo

A Friend of Mr. Lincoln: A novel

Water and Light: A Diver's Journey to a Coral Reef