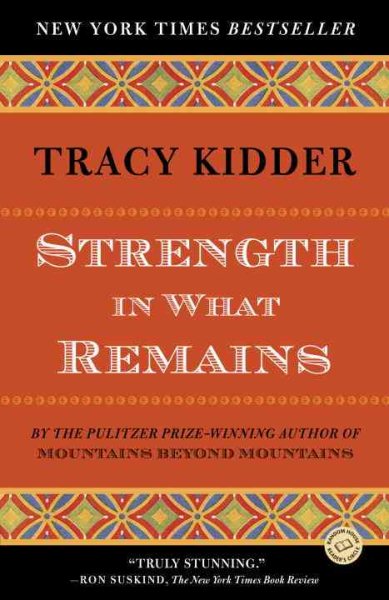 Presents the story of Burundi civil war survivor Deo, who endures homelessness before pursuing an education at Columbia and eventually returns to his native land to help people in both countries. Read More
NAMED ONE OF THE BEST BOOKS OF THE YEAR BY:Los Angeles Times • San Francisco Chronicle •Chicago Tribune • The Christian Science Monitor • Publishers WeeklyIn Strength in What Remains, Tracy Kidder gives us the story of one man’s inspiring American journey and of the ordinary people who helped him, providing brilliant testament to the power of second chances. Deo arrives in the United States from Burundi in search of a new life. Having survived a civil war and genocide, he lands at JFK airport with two hundred dollars, no English, and no contacts. He ekes out a precarious existence delivering groceries, living in Central Park, and learning English by reading dictionaries in bookstores. Then Deo begins to meet the strangers who will change his life, pointing him eventually in the direction of Columbia University, medical school, and a life devoted to healing. Kidder breaks new ground in telling this unforgettable story as he travels with Deo back over a turbulent life and shows us what it means to be fully human.NEW YORK TIMES BESTSELLER • Named one of the Top 10 Nonfiction Books of the year by Time • Named one of the year’s “10 Terrific Reads” by O: The Oprah Magazine “Extraordinarily stirring . . . a miracle of human courage.”—The Washington Post “Absorbing . . . a story about survival, about perseverance and sometimes uncanny luck in the face of hell on earth. . . . It is just as notably about profound human kindness.”—The New York Times “Important and beautiful . . . This book is one you won’t forget.”—Portland Oregonian Read Less

Mountains Beyond Mountains: The Quest of Dr. Paul Farmer, a...

Mountains Beyond Mountains: Healing the World: The Quest of...