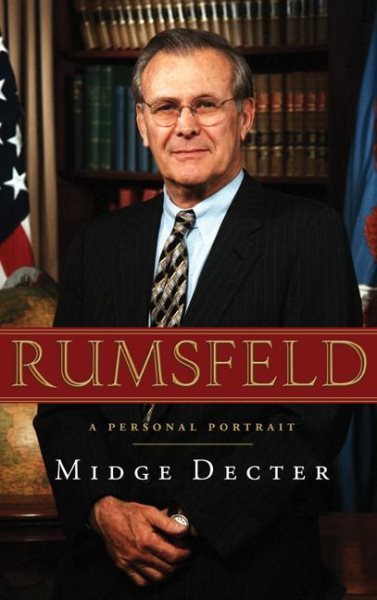 A behind-the-scenes portrait of the Secretary of Defense chronicles his achievements at the Pentagon, in the War on Terror, and during the military campaign against Iraq, noting his relationships with George W. Bush, the media, and the military. Reprint. 30,000 first printing. Read More
US Defense Secretary Donald Rumsfeld has become the leading spokesman for the Bush administration on all matters related to the military and its prosecution of the war on terror. Midge Decter, an accomplished political journalist who has enjoyed over two decades of friendship with Rumsfeld, will answer the question of why and how he has come to play such a critical role. Partly biographical and partly analytical, the book focuses on Rumsfeld's past and current activities as well as what he represents: an ethos of sturdiness, frankness, and resilience that has clearly resonated with the American public. Decter gained Rumsfeld's full cooperation, and she trailed him through the Pentagon and beyond as he prosecuted the war on terror and the military campaign against Saddam Hussein. The daily stresses of advising the president, handling the media, crafting military policy, and dealing with issues of life and death are examined from the inside – as they happened. This book offers a dynamic, intimate, behind–the–scenes look at the biggest political star (apart from the President himself) of the Bush administration. Read Less

And if You Play Golf, You're My Friend: Further Reflections...