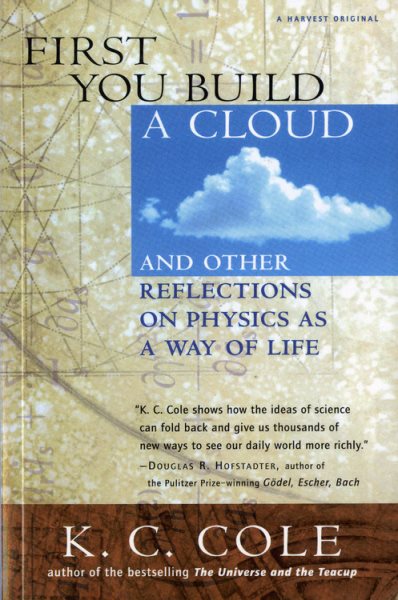 An introduction to physics examines the theoretical principles developed by Galileo, Bohr, and Newton, and explains how the laws of physics pervade everyday human life Read More
For many of us, physics, like math, has always been a thing of mystery and complexity. In First You Build a Cloud, K. C. Cole provides cogent explanations through animated prose, metaphors, and anecdotes, allowing us to comprehend the nuances of physics-gravity and light, color and shape, quarks and quasars, particles and stars, force and strength. We also come to see how the physical world is so deeply intertwined with the ways in which we think about culture, poetry, and philosophy. Cole, one of our preeminent science writers, serves as a guide into the world of such legendary scientific minds as Richard Feynman, Victor Weisskopf, brothers Frank Oppenheimer and J. Robert Oppenheimer, Philip Morrison, Vera Kistiakowsky, and Stephen Jay Gould. Read Less

Goodreads reviews for First You Build a Cloud: And Other Reflections on Physics as a Way of Life

The Universe and the Teacup: The Mathematics of Truth and Be...

The Hole in the Universe: How Scientists Peered over the Edg...

Mind Over Matter: Conversations with the Cosmos