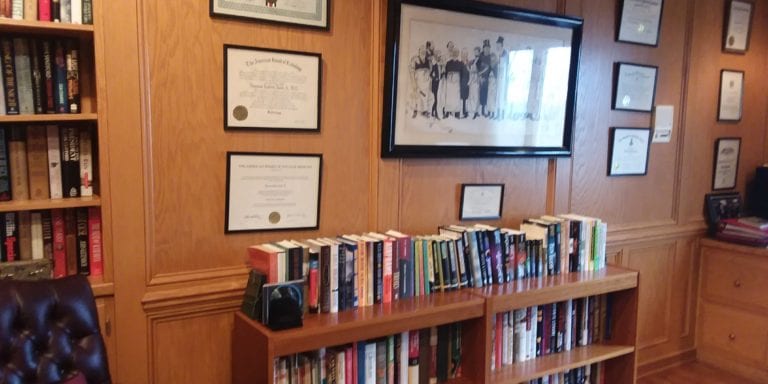 “Never send to know for whom the bells tolls; it tolls for thee.”

— John Donne (author of the book below) from Meditations XVII

On February 10, 2018 at the very end of a long workday the following email dropped in. The subject line read:

The rest of the email went on:

Our name is […] and live in Frederick MD.

a bought you and the way you take books.

We are moving from our large house to small house’

We are very book reader and in our library we have more than two thousand books.

99/100 are hard cover books and some very old and antique.

We are wonder if you want to have them.

The grammar, spelling and syntax were confusing. I’d usually blow this off. Or pass it off. But something told me that maybe I should go ahead and pursue this collection.

Ah, my book muse. Here to advise and guide…and chide…

“Far be it for me to to guide your every move.”

“Maybe I should think about it?”

I could send someone else.

“Just reply to her.”

“Well, I do feel in the mood for a house call…a little adventure…even if I know nothing about the books there. And from that email I doubt I could get a very accurate description.”

So, I replied to her email:

Yes, we can come by and make an offer.

Let me know when you are ready for us.

We exchanged a couple more emails. A date was set. Oddly, her subsequent emails had been composed perfectly. Maybe she had been upset writing that first email? Perhaps that first message had been dictated?

Not knowing what I was getting into, I took an empty van and had Clif and Steve follow me in another. It was a gray day but not as cold as February can be.

We found the house at the end of a quarter mile gravel lane surrounded by woods. The stone house sat atop a little knob. From the end of the long driveway it looked nice but didn’t appear to be anything special. Appearances can be deceiving.

We were 3 scruffy tradesmen standing at the front door when it started to open. It was massive oak and extra wide. The woman standing behind was quite petite. She was attired in a very classy muted pink woolen dress and matching jacket. Chanel? She appeared to belong more in Midtown Manhattan than the woods out in rural Frederick County Maryland. Behind her a broad marble foyer lined with large mirrors in gilded frames introduced the house proper. Passing through the ten or so long paces of foyer we entered a large hall which led in several directions. To my left was a formal living room. It seemed nearly as big as a tennis court. It was decorated in white and blue. Massive drapes lined the two exterior walls. How on earth do you keep a white carpet white? The furnishings could have been behind ropes in a Chateau tour or in a penthouse at the St Regis or Pierre or…

The house certainly didn’t look this big from the bottom of the hill.

She led us on a tour to the rooms where the books were. You could have roller-skated around the island in the lavish kitchen. Beyond that I saw a dining room set with 16 chairs.

Throughout the home everything was perfect. Not a bit of clutter nor anything out of alignment—much less out of place.

She took us to “his” office.

“He has been gone almost ten years. Now…I must leave here too.”

“He” had been a well-known doctor.

The office was lined with mostly modern books. Where there weren’t built in bookcases the walls were wood paneled up to the crown molding at the ceiling high above. Framed diplomas, awards and certifications covered much of those spaces as well as photographs and some art. In many ways “he” was still here. It was as if he had never left.

Then to the personal areas of the home. The master bedroom. There was a large long room before the actual bedroom with its king bed raised on a platform. Would this be a dressing room? Or sitting room? The bed looked through a broad open archway in to that room. The long wall which it looked upon was all built-in floor to ceiling bookshelves. They were filled with a couple thousand hardcover books. Most were modern. All appeared to be in perfect condition. The colorful dust jackets made bright that long tall monolith of books.

There were several other rooms with bookcases as well.

Oddly, this was one of the rare occasions where the books were leaving first. The house was perfectly appointed when we arrived. When we left there were bare shelves and empty bookcases throughout. We had moved some chairs and furniture to get at the books behind them. Did we replace them all exactly? She told me the auctioneer would do the rest.

When we were done, I went to the foyer and called for her. I asked her:

“Is there anything else we can do?”

See looked up at me. The spell had broken. Her formality melted—only briefly.

She reached out and laid a small delicate hand on my arm. It was a young hand belying likely four score years. It was as light as if a dove had landed on my rude winter overcoat. Time stopped for a moment and then her head tilted up and looked me in the eye.

“Tonight I will cry for my books.”

That evening, coincidentally, my dear friend, doctor (retired now) and best book client had me over. We are part of a “Whisky Club.” Every couple months one of us hosts a dozen or so members at home. Often there will be a 10 or so different bottles set out for tasting. There’s usually a theme—a region of Scotland, vertical ages of a single malt, blind tastings, “Scotch” made in different countries… It’s a lot of fun, collegial and an efficient affordable way to taste a lot of old, rare and expensive scotches.

He had written a week before:

“Let’s get together. I have a lot of bottles with only an inch or two left in them. I want to use them up.”

Two other retired doctors joined us. I told them about the house call knowing they would have known the couple and would be interested.

As we sipped down the last drops from many bottles, they told me some stories…

“… the most formal meal I ever had at someone’s home. It was about 1980. They owned the Buckingham Mansion. [Now an inn and site of upscale weddings, etc.] A butler opened the door and took our coats. There were maybe twenty of us. We all were in tuxes and gowns. There were 4 or 5 liveried servers and they would swiftly whisk in each course or whisk away the finished servings in unison. At the end of the meal the men and women were lead to different drawing rooms for conversation and drinks. Very old school.”

“He told me he was once the guest of honor at a dinner at the Saudi Embassy. He had organized the establishment of a number of medical clinics in Saudi Arabia. There were about 50 people present. As the honored guest he was seated on a raised dais. Only he and the Prince shared that table. And they were the only ones presented with a special dish. Goats’ eye soup. He told me there were about ten eyes looking up at him bobbing in the bowl. I asked him what they tasted like. He said he didn’t know. He told me he had swallowed about half of them whole before he could politely say he had had enough.”

I told them I thought she was Iranian because there were a lot of books in Farsi. Fortunately for me, she was keeping those. They would be a very tough sell.

“Oh, not Iranian! Persian! She was always very specific about that! She came from an ancient royal family—long before the Pahlavi’s came to power…

“She’s moving to Barclay’s Choice. [The nicest assisted living complex in the region.] I’m surprised she held out this long.”

That jogged something in my subconscious. When I was leaving and was approaching the front door, I recalled I did notice something out of place. Set on the seat of a carved, gilt and chintz side chair—one of a matching pair on either side of the door and sidelights—was a small canvas zippered portfolio. On it was an embroidered monogram: “BC.” Now I recognized that as the logo of “best assisted living facility in the region.” That would be their introductory packet. In it was a book I am sure. A new book for her to read. A guidebook to what her new life would entail.

I remembered I had stepped out onto the flagstone porch and looked down her hill. I drew in a deep breath and then looked up. The sky was now swirling grays—as if God was mixing it with an invisible wooden spoon. If it wasn’t the heart of this house I had taken, it was some vital organ I had removed.

After we’d finished the dregs of about 15 bottles of whisky I went home. My mind was swirling. I felt uneasy. Maybe all the wee drams had made me too melancholy. I unlocked my door and entered my living room. I switched on a light. The room brightened a bit. The far wall is lined with built in bookcases. Nearly floor to ceiling.

I stood and stared at them and sighed and thought: “Tonight, I will…”

“Aye. But don’t get yerself maudlin on me.”

“I know. I know. But her books you’ll give them thousands of new beginnings.”

“The books; her books; yer books can be forever. Immortal.”

I crossed the room to my shelves and dragged a forefinger along a row of spines. It made a sound: “Tick, tick, tick…” Like a clock, until I reached the end of the shelf.

Her collection was sorted over the next couple days.

There weren’t many books from there that needed my attention. There were some nice local history books. She had all the early Anne Tyler books in perfect condition. We don’t get many people collecting Tyler anymore. I wonder why. A couple old medical school yearbooks were also put on a cart to my attention. The covers were quite striking. “Class of ’49.” I opened one and leafed through the pages until I got to the “Rs” and found his name. There he was a long time ago. Well, not that long ago…

This story was posted March 15, 2018. At 7AM March 16th, I got a call from Jamie, my nephew. At 7AM it could only mean one thing—my oldest brother Joe had passed away. Born in 1939, 16 years before me, he had miserable final times. Bedridden the last few years. I still remember the dashing US Naval Academy graduate (class of ’62) and combat pilot in Vietnam.

God speed, Joe—I’m sure you flew a jet to heaven. 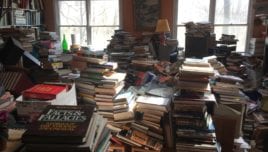 There's an odd little town in Northern Maryland close to the Mason Dixon Line but not really close to anything else... END_OF_DOCUMENT_TOKEN_TO_BE_REPLACED