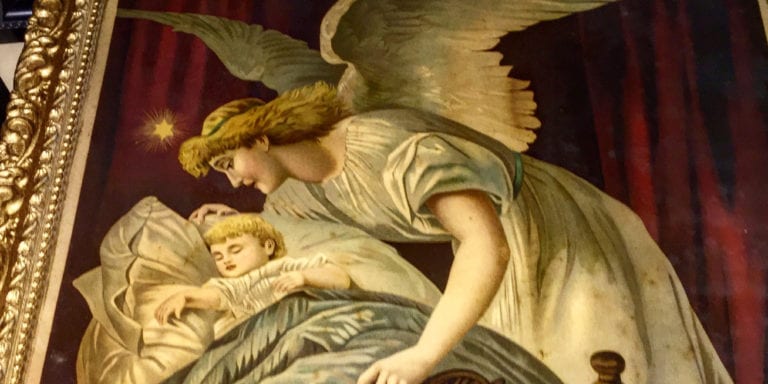 I’m being nibbled to death by the calls and emails, texts and notes.

So many emails. Please come get my books…

“Boxes and boxes of books to sell by color, size, etc. I look forward to hearing from you.”

I reply: “Where are these books?”

“Ok, Chuck. I have all these books. Yes, I would like to donate where they are not thrown out but given to the underprivileged. Can you help me?”

How do they find me?

So many books. So many, many books. They are flowing into our stores. We’ve had to swap vans out of each store every day this week. Three van loads a day.

And deliveries backing up to the warehouse every day. And drop offs. Sometimes we discover boxes of books dropped off unbeknownst to us over the weekends.

Notes from phone calls requesting regional house calls are constantly being taped to my office door.

This email came in the day before:

I am clearing out an estate for a relative and have an immense amount of books. I have half the living room floor filled with boxes of books and she still has many older books still on the shelves. I would like to see if you could come and look. I have a small collection of older record albums as well.

I had replied and agreed to meet there this morning.

Why did I choose this one to do myself?

Well, it’s only 10 miles away, but mostly to get out of the building and away from the calls and texts and emails and people asking for little bits of my life—to get away—if only for a little while.

I hop in my old Jeep and follow Clif in the “Cube”—our little box truck.

As I drive eastward, I take deep breaths and try to think.

Is today the longest day? It is the end of spring. It flew by. I am so sad to see it go. I wish the daffodils were still blooming.

This is what I signed on for.

But it is getting bigger and more and faster all the time.

I ask myself: “Should we start turning books away at the stores? Should I just crumble up the notes taped to the door rather than passing them on to Nelson or seeing if we can do any ourselves?”

At this point—if we say no to a book in this region there’s likely nowhere for it to go but oblivion.

Why don’t more people do this? I should be glad there is little competition anymore. I am. At least here in the DC region.

The docks are full—all 21. The trailers we’ve bought in the last couple years are parked outside in the “Yard.” They are backed up against unused docks. They are all full. Pallets of boxed books waiting to be sorted and evaluated.

The phone chimes on the seat next to me. It says the call is from Greencastle, Pennsylvania. Do I know someone there? It is the dentist office. “Just confirming your appointment next Monday, June 25th.”

“Already? When was I last in?”

Clif’s brake lights go on just ahead and reverie ends. He slows, then stops and backs into a driveway. I pull in after him.

It is the kind of house I’ve visited in this area many times. I already know the layout, the floor plan. 1950s. I can tell it was an old person’s home. Things are kept up but only minimally. Whoever buys this will need to do some work but nothing major.

The guy I’d exchanged emails with comes out and greets us.

I step up on the cement stoop and then inside.

Most of the books are boxed on the floor. Spine up. I can tell in a minute there’s nothing special. Just nice books an old lady would have had. These books wouldn’t have merited a trip out here. Certainly not for two people.

“Was she a relative?”

I made a token offer on the books and asked if I could look around.

I went from room to room looking for…something. As much just to look at a life as to find something I could sell.

It was a small quiet life.

In a spare bedroom her high school class picture hung on a wall. Frederick High School 1946. A couple hundred kids looking at the future in black and white.

Did she have a boyfriend? Was he killed in the war?

In another bedroom I look up and see an angel. She is bending over a sleeping baby. A glowing star is suspended in mid air before her forehead. What is the symbolism there; the meaning of that star?

“An Angel’s Whisper”. That would be nice. A blessing. She’s beautiful. A kiss and she would fly away. Just like someone else I knew with wings.

“You’re no angel. Maybe something in between…”

“Indeed. My feet do not touch the earth, but He ‘made man a little lower than the angels, and hast crowned him with glory and honour. … madest him to have dominion over the works of thy hands; … hast put all things under his feet: All sheep and oxen, yea, and the beasts of the field; the fowl of the air, and the fish of the sea, and whatsoever passeth through the paths of the seas.'”

“Yes, sometimes you can have your feet on the earth and your head in the heavens. A little grounding is good for you.”

“I wondered why I was here.”

I head out to the kitchen. There’s an electric typewriter. There is a bit of demand for them now. A retro thing. Some say a privacy thing. Your keystrokes are not recorded in some database when you write on a manual typewriter.

Then out to the garage. Another typewriter.

“Is there anything in the sheds out back?”

“Some stuff. You’re welcome to look.”

I go out the kitchen door and down the steps to the backyard. A massive blueberry bush towers over me. It’s the biggest I’ve ever seen. 12? 15? feet tall. It is laden with green berries. How many years did she harvest berries from this monster? 40? More?

I open one shed. Some wooden-handled rakes and shovels. An old rototiller that likely hasn’t sputtered to life in decades. The next shed has an old metal hasp lock on the door. Its hand forged. Repurposed from a much older structure. A whittled sliver of wood painted white is inserted in it. I remove it and the door floats back toward me. In a corner are some big old metal cans. Inside those cans are more cans. Some have graphics on them. On a shelf I see a couple books. Massey Ferguson tractor owner’s manuals from the 1930s. So, she was a farm girl.

I cross the backyard and climb the steps and marvel at the berry bush.

In the kitchen I see a big bowl of ripe blueberries. Why hadn’t I noticed them before?

I think: “Blueberries are summer aren’t they? They can’t be early. It has rained nearly every day for two months.”

I find the cousin’s son.

“There are a few things I can make an offer on. Do you want to walk through with me?”

We go from room to room. I tear a dust jacket off a worthless 1950s book club novel to write my offers on. It’s good for buyers and seller to be on the same page.

He agrees to everything but a large framed 19th century matrimonial certificate I lift off a bed.

They’ll keep that in the family.

Beneath it is an award from the woman’s Methodist church. “For 85 years of service…”

Clif has the books all loaded. The breakable stuff I put in my car.

I head back to the warehouse. I take a back road. Clif can head back on his own. I’m facing west now. The angel rides on the seat next to me. On the way, my mind starts looking forward again. I think: “We can reconfigure the sorting stations so they can go faster.”

“Maybe we can carve out some space for a 6th sorting station.”

Then I’m back in the whirlwind that is this 3-acre warehouse of books. Clif tells me the Frederick and Gaithersburg stores both need vans swapped. He goes to one. Ernest heads to the other.

I find a pallet jack and push it under a pallet of books. I pump the handle up and down and the thousand or so books rise off the floor. I roll the books to a sorting station, drop it and pull the pallet jack out.

I survey the sorting area. I think: “If we move this …”

In half an hour a station is reconfigured.

“Let’s experiment with this for a while and see if it works. We can change the other stations tomorrow.”

The day is over. I can go home now.

Was today the longest day or is it tomorrow?

I awake around 5:30am and look outside. It is summer. The distant valley is blanketed in fog. I take a picture and post it on Instagram. I didn’t know until later that it could have been at the moment of the Summer Solstice. 6:07am in this time zone. The sun is at its furthest north. For the next six months it will travel a little south every day.

By the time I’m dressed and the dogs are fed, the fog has rolled up the mountain and engulfed the house.

I roll down the mountain and aim toward the warehouse. Another day. The recycling trailer is being swapped out. Out go 40 pallets of pulp paper, scrap plastic and several varieties viable sorted books. Probably about 20 tons of stuff. The Gaylords of sorted mass market and trade paperbacks have a little more value than pulp. For those they will pay some more than the $30 per ton we get for scrap paper. The empty replacement trailer backs up to Dock 5. This one will be filled in a week. Later the cardboard container into which thousands of boxes are crushed is swapped out as well.

I survey the sorting area and decide we will able to carve out another station. Why hadn’t we done this before?

The need wasn’t pressing, I suppose.

“Necessity is the mother of invention.” (AKA panic triggers creativity?)

Maybe the increased flow of books in and out can reach equilibrium again…for a while. The tide will be stemmed…for a while.

I feel I can take a break and begin this week’s book story. I go in my office and close the door. That’s a rarity.

“Leave me alone for a bit.”

The little estate in Monrovia, Maryland was a “small call” but as with so many homes whose thresholds I’ve crossed, there’s a lesson to be had. A tale.

She was happy with a small life. A slow pace. The blueberry bush leafs out, blooms. The green berries ripen to blue black. The bush builds energy and roots the rest of the summer until fall. The leaves redden and then drop. The bare branches are dormant through the winter.

I’m not even halfway there yet. But I can aspire to that. Despite the whining and complaints, I enjoy riding the whirlwind most of the time. It’s a rush.

Sometimes it is good to hop off for a bit and try to look in from the outside…or from above.

Try for an angel’s perspective.

What became of the angel? She went home with me. 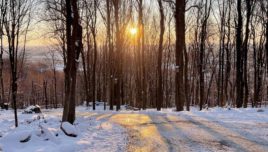