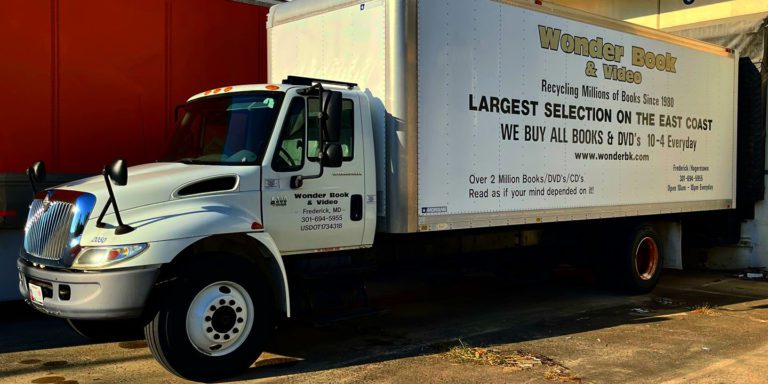 Prior to that, if we needed a very large vehicle, we would rent a truck from Ryder about a half-mile away. That involved the time of getting there and filling out the paperwork. When we were ready to return it, we would need to fill it up with gas. Once there, they would calculate the mileage and taxes and fees before we could head back to the warehouse. I don’t recall how we decided buying a big truck would be good. Must have seemed like a good idea at the time.

The big 24-foot box truck with its high dock platform—its tailgate is about 4 feet off the ground—has been a good investment for the last 13 or 14 years. We don’t take it far any more. Almost always, it spends the weekend at the Frederick store about 5 miles from the warehouse. There, we load books and things we buy from the public. It is usually pretty full. About 5 years ago, I came up with the idea of loading it with empty Gayloards with “gates” cut into them using a saw.

This facilitates unloading. I’d noticed how long it took and how messy it was to have a few hundred assorted boxes, bags, tubs and loose books carried out of it each Monday.

I never minded driving it—except downtown. It is a wide awkward beast. Clif feels the same. Ernest refuses to use it.

At its current age, you need to start it and let it warmup for about 5 minutes. If you don’t, it has a tendency to stall while you’re driving down the street. That’s an unpleasant experience. It can be much worse depending on the traffic. I learned to push the gearshift into neutral and glide at whatever speed you’re going while turning the key off and on and hoping the thing fired up. It has always worked.

Now I just wait for it to warm up.

You’re in constant motion inside it—even if you’re stopped. The big engine under the hood vibrates and shakes and rattles the driver’s compartment. The driver’s seat is on springs and is constantly gently bumping up and down.

It was about 2009 or 10 when I received an email from a Gabrielle. She was a French tutor and translator and had books to sell way down in D.C. She lived on O or P or Q or R or one of those lettered streets that puts just a tiny bit of logic into parts of Washington’s grid. The numbered streets go north and south—but invariably bend or end or jog off. The lettered streets go east and west, but they also run into parks and stop. Maybe they’ll start up again on the other side. Maybe they’ll come to big cross street and end and then start again a half block up on the other side. Then there are plenty of circles and angled streets and dead ends and one ways to make the city painful to drive in. L’Enfant did a masterful job planning the city—to a point.

I used to like going to the city. They had stuff you could find nowhere else. Now you can find just about anything you could think of in Frederick. It even has a Wegmans.

I told her I’d be glad to come take a look.

It was November. I remember because of all the wet leaves filling the edges of the street from pavement to above the curb. The trees were bare. It was an old grand neighborhood. Large 19th century homes, most in immaculate repair, lined both sides. And it was very cold and gray.

Hers was a brick house.

Not in immaculate repair.

I stepped across the walkway through the tiny front yard. There was no lawn or garden. The bit of land was smothered in ground covers like pachysandra and creeping myrtle.

Stones steps led up to the porch with barred gates protecting the recessed entry space. A very large fairly ornate copper frame lined and covered the exterior front wall. White marble lintels were above and below each window. One of the barred gates was ajar. I stepped through it and crossed to the door. The front door was wooden and very heavy. Layers of different kinds of lathed moldings gave the door a lot of depth and decoration. There was a thin crystal sidelight on each side of the door and a transom light above.

Those windows had all been painted black from the inside.

I pushed the doorbell. I heard nothing. That’s not unusual. Sound has difficulty escaping the massive brick edifice.

After waiting the appropriate time, I stepped to the door and rapped my knuckles upon it several times. I stepped back and waited. Eventually, the door opened such a narrow crack that I couldn’t see a nose or a hand.

“Who is it?” squeaked a voice like a frail sparrow.

If she was concerned, I was now too. This strange scene could only get stranger inside. I might get baked in an oven like Hansel and Gretel.

The door groaned as it slowly opened. The sound of old wood rubbing against old wood.

It was dark in the foyer where she stood. But the gray autumn light from outside illumined her a bit.

She was petite. Just past middle age. She was bundled in a big sweater, heavy woolen pants (likely with another layer or two below.) She had a bulky knit hat pulled down below her ears and just above her eyes. A large wide wool scarf wrapped around her neck several times. She wore warm boots. Knit gloves with the fingers cut off completed her outfit. Her face was indistinct because so much of it was covered.

“Well, come in. It is cold with this door open.”

I stepped into the foyer, and she pushed the door closed. It shut with an authoritative thump.

We stood in darkness for a moment until she produced a small flashlight from the folds of her clothes.

“You brought a flashlight as I instructed,” she creakily squeaked. It was more a statement than a question.

I produced my flashlight and ran its light down the black hallway. It revealed beautiful carved oak paneling rising to a ten-foot ceiling. The walls on both sides of the hall were lined with a mishmash of cheap wooden and metal bookcases.

It had been a long drive.

“May I use your bathroom?”

The books were everywhere in every room. There were planks supported by food cans covering the kitchen sink.

Along the wall of the ornate carved oak stairway, she’d thrown together bookshelves made of raw planks and used bricks.

On the second floor, there was indeed a bathroom. But the tub and toilet and sink were turned into shelving supports. The bathroom walls were done in old ugly green tile that had been repaired with yucky brown glue caulking. Most of the walls were covered by the three-shelf, unstained, wooden fold-up bookshelves. Barnes and Noble used to sell those. (Those shelves were and are still in use at book shows. They are easy to transport. In some instances, you can stack one atop another as they have a tongue and groove which can interlock—tipsily.)

It was then it came to me. There was no heat, light or water in the house.

The bedroom really creeped me out as she had made a bundle under the bed clothes so it looked like there was someone in the bed. A body? I didn’t want to check.

The books were all in new condition. If she had money, she spent it on books, I guess.

She had them pretty well-organized as well. Ireland was in the bathroom.

I made the offer, and it was accepted.

We returned the next week with a van and the big truck. Clif didn’t want to drive the truck in the city, so I did.

I pulled to the curb to park, and there was an awful metallic crunching noise above me. The tall truck had struck a lowish branch. My bad. The truck leaked for years after that until we got it repaired.

The “body” was still in the bedroom. Gabrielle appeared and disappeared like a specter periodically.

It was a great buy for internet sales. All the books could be described as new.

I chatted about it with Clif afterward. He’s much more gregarious than I.

“She’s a squatter, I think. Uses a chamberpot and takes it in the backyard…”

One of the weirder ones.

I used a little camera to get the pictures. This was before my phone had a camera.

What is a rare book?

I could have sworn when I was a young bookseller, a book was defined as “rare” if a specialist came across one every 25 years.

That’s echoed by the man below words.

Now the term is used much more loosely. A lot of booksellers use the term rare in their business. Jane Doe’s Rare Books. You wouldn’t have much inventory if all you had were once in a quarter century books.

Now you can quickly get an inkling of a book’s scarcity by searching the internet. If there are a handful of copies for sale on viaLibri—it is not a rare book. Or you can check WorldCat. There you can find how many copies of a book are held in university and institutional libraries worldwide. If there are only a handful, you know you have a pretty scarce book in your hands. If there are a 100—well, not so great. I always enjoy it when we find a book with the population:

Then the fun begins.

Note: Books that are not “rare” can still be quite valuable. There are a LOT of signed first editions of To Kill a Mockingbird. The prices are all over the place. Caveat emptor.

Travis and I are driving back from the Gaithersburg store. It looks great! The new wooden record bins are beautiful. We will be able to send LOTS of fresh LPs there.

When one of the stores has a great staff, you can feel the vibe inside.

They created a “Beautiful Books” section near the counter.

Eye candy… that was my idea, but their execution is better than anything I could do.

There are still plenty of creepy dolls watching your every move. 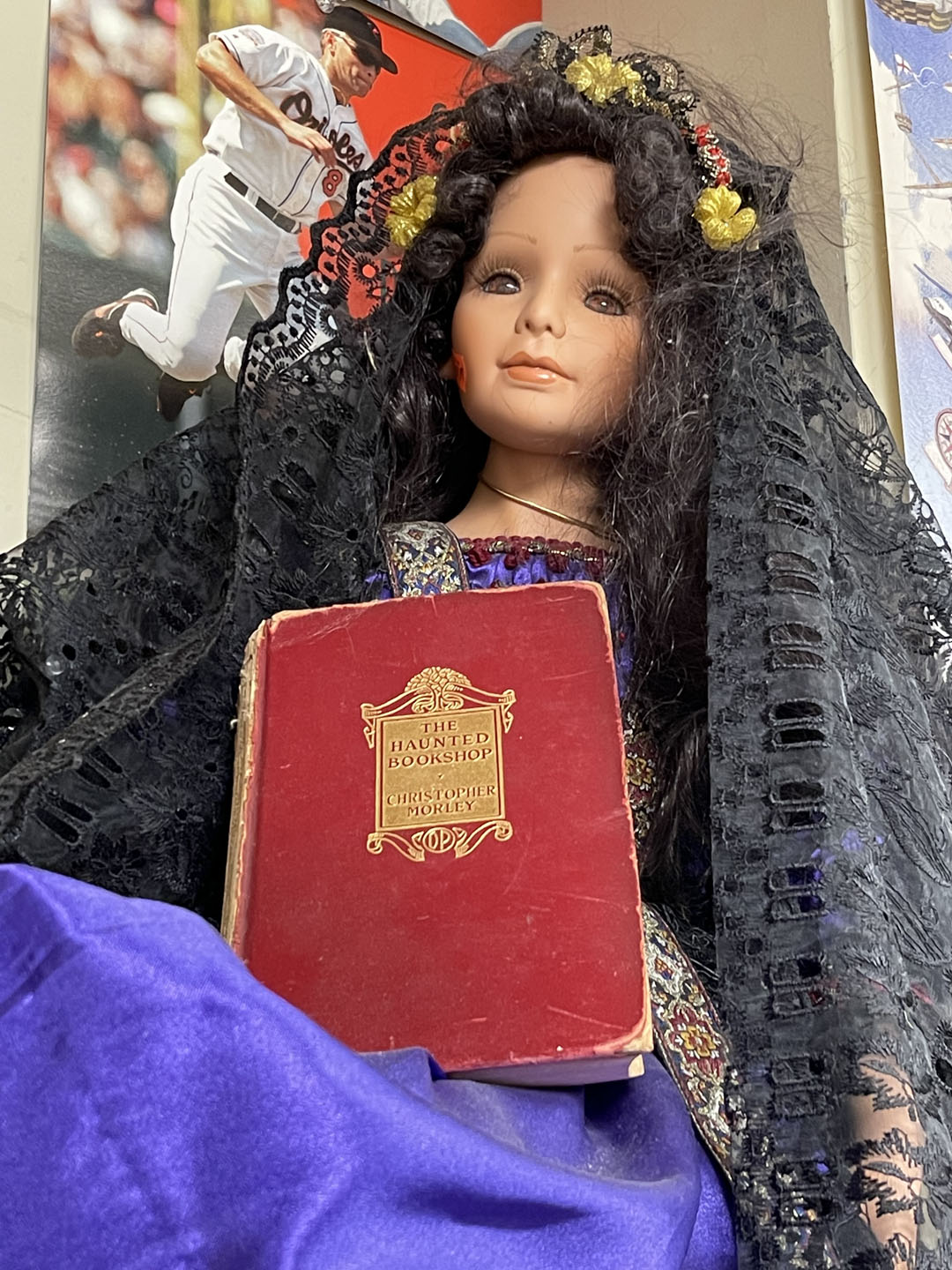 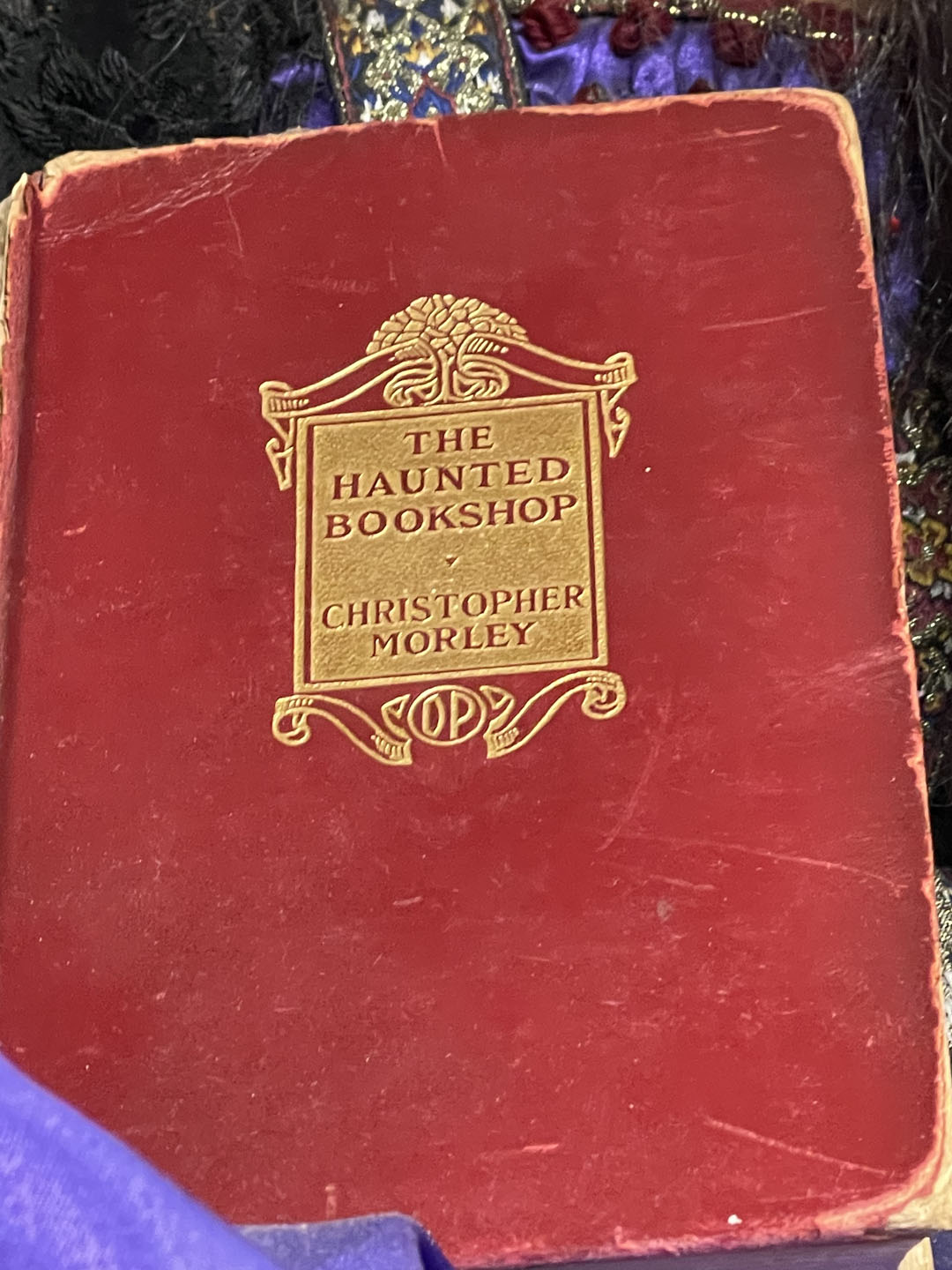 And somebody put this on the front counter.

I’m flattered. A bit baffled. But if the dolls don’t scare people off, perhaps I won’t either.

This entry was written on Friday, November 5.

If everything goes smoothly and I don’t test positive and I have all my documents in order, I’ll be in southern Italy! And my next story—Inshallah—will be posted from there! 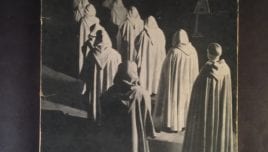