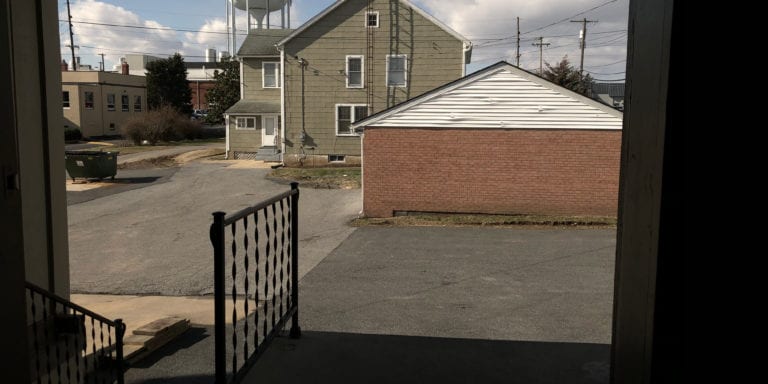 Dreams can be frightening things. You just never know how they are going to turn out.

When Chris Kline of Kline Scott Visco Real Estate asked if I wanted to look at a property at 720 North East St last August, I didn’t know what to expect.

“Sure. Why not?” But I really didn’t think the property or the location would be a good fit for anything I might venture. It seemed to be just an old house with a jumbled warehouse behind it.

Chris had written my first lease as Wonder Book in the early 1980s. He and Maribeth Visco have helped make some great choices over the years. I don’t know if Wonder Book would still be around if they hadn’t believed in it again and again.

When we first turned in the driveway, I was stunned. I’d driven past this place hundreds of times. I never knew there was still a “farm” in downtown Frederick. Was it invisible all these years? Did it just appear—like Brigadoon?

It was just so cool. Soooo cool!

“What on earth could you with it?”—that was my Book Muse being a cynical angel on my left shoulder. Cautioning me to be practical.

“It is pretty exotic…” I thought in response.

“This is a farm in downtown Frederick! How cool would it be to put books in the old farmhouse? Maybe eventually partner with someone who knows the trade and get permits to serve wine, beer…maybe cocktails. You’ve been dreaming about that for years!”—that was my Book Muse acting as a romantic impractical angel egging me on from my right shoulder.

I got all glassy eyed.

Chris and I first toured the “Barn.” 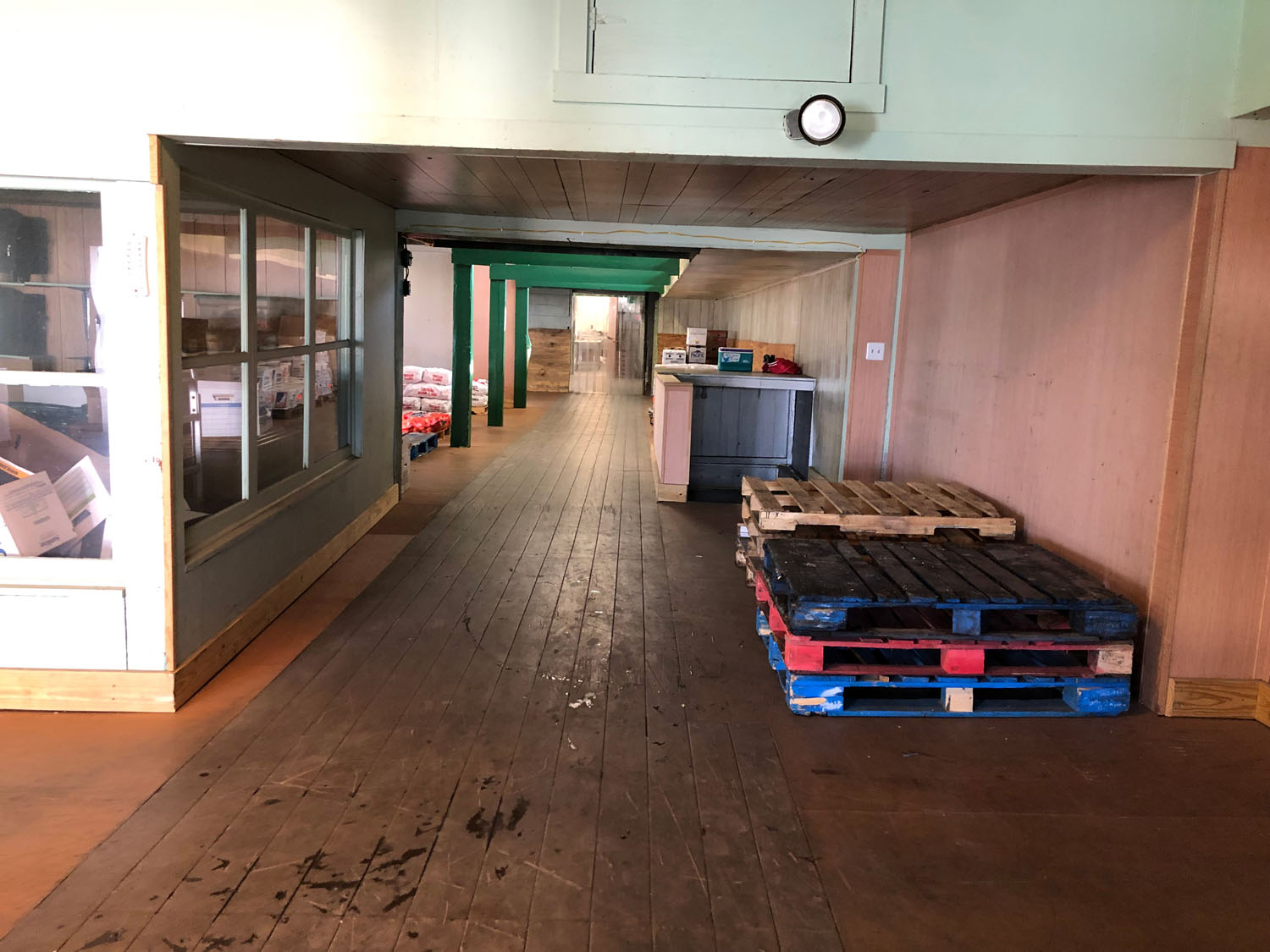 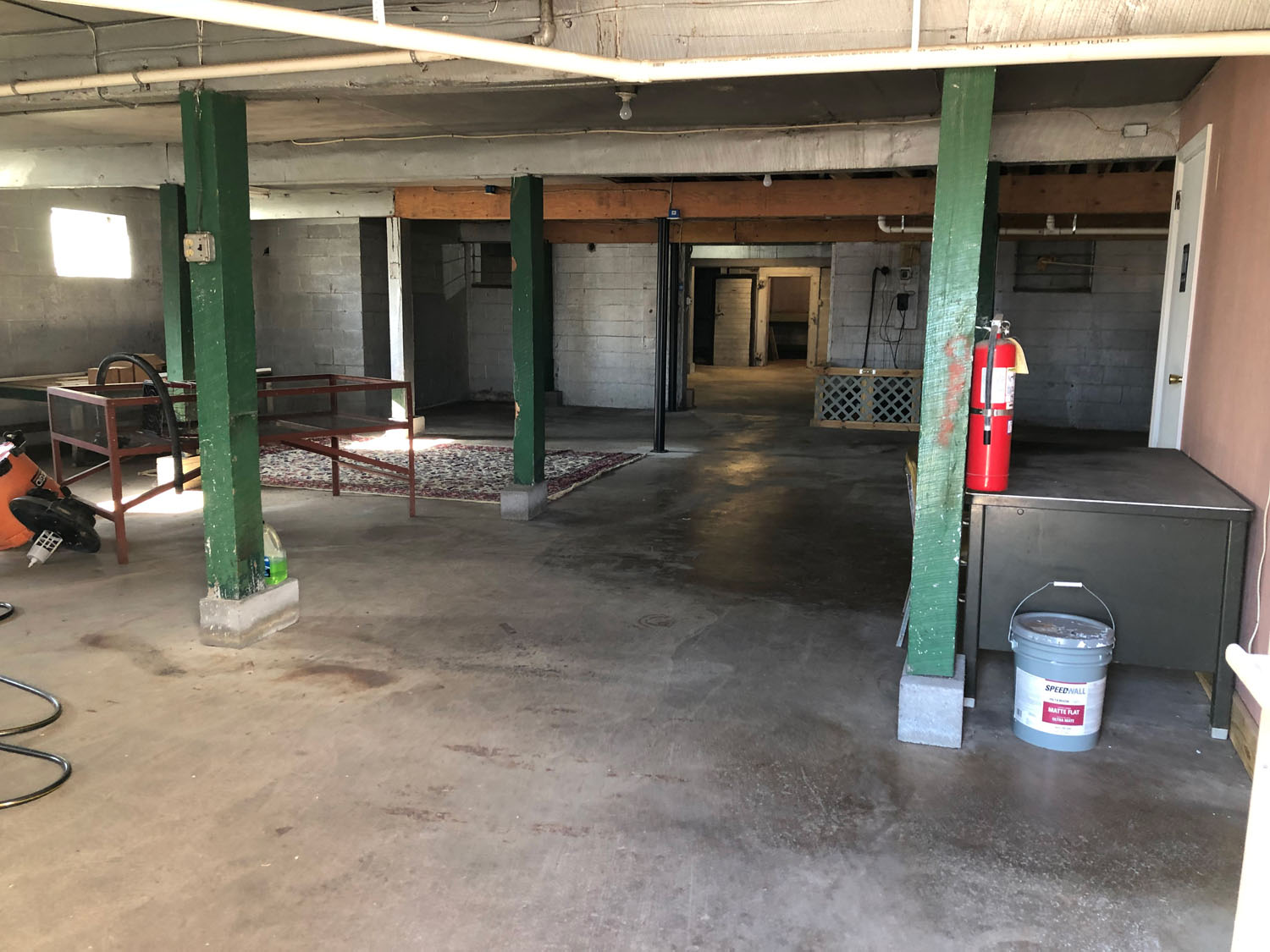 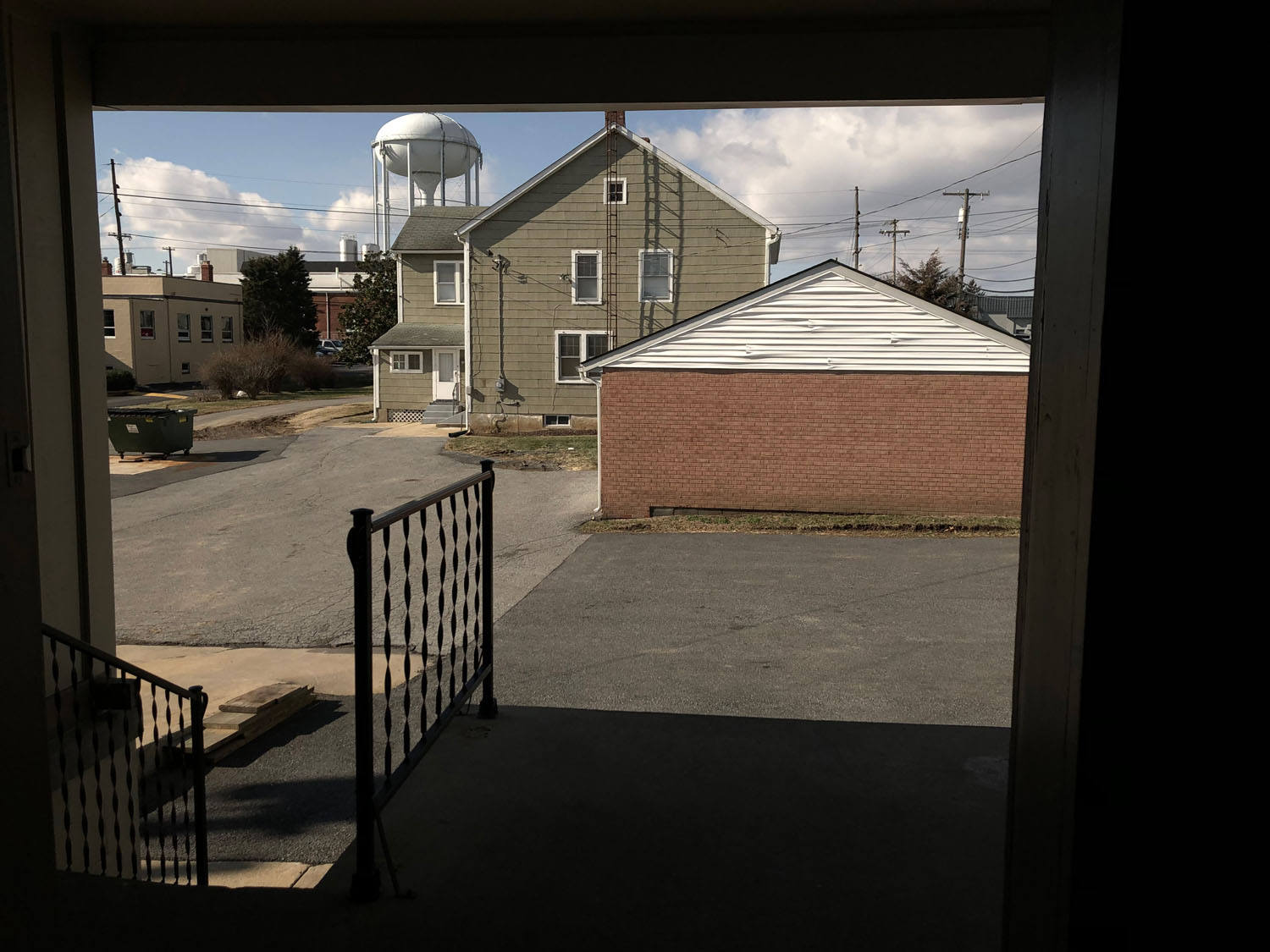 “This could be an incredible brewery!”—that impractical tone again…

But, well, she was right! Most of building is stone and old block walls, heavy wooden beams and old thick-planked floors. The air in lower level was cool even in the summer. You could put a LOT of stainless steel brewing tanks down here.

What on earth are all these walk-in coolers for? The doors were massive. 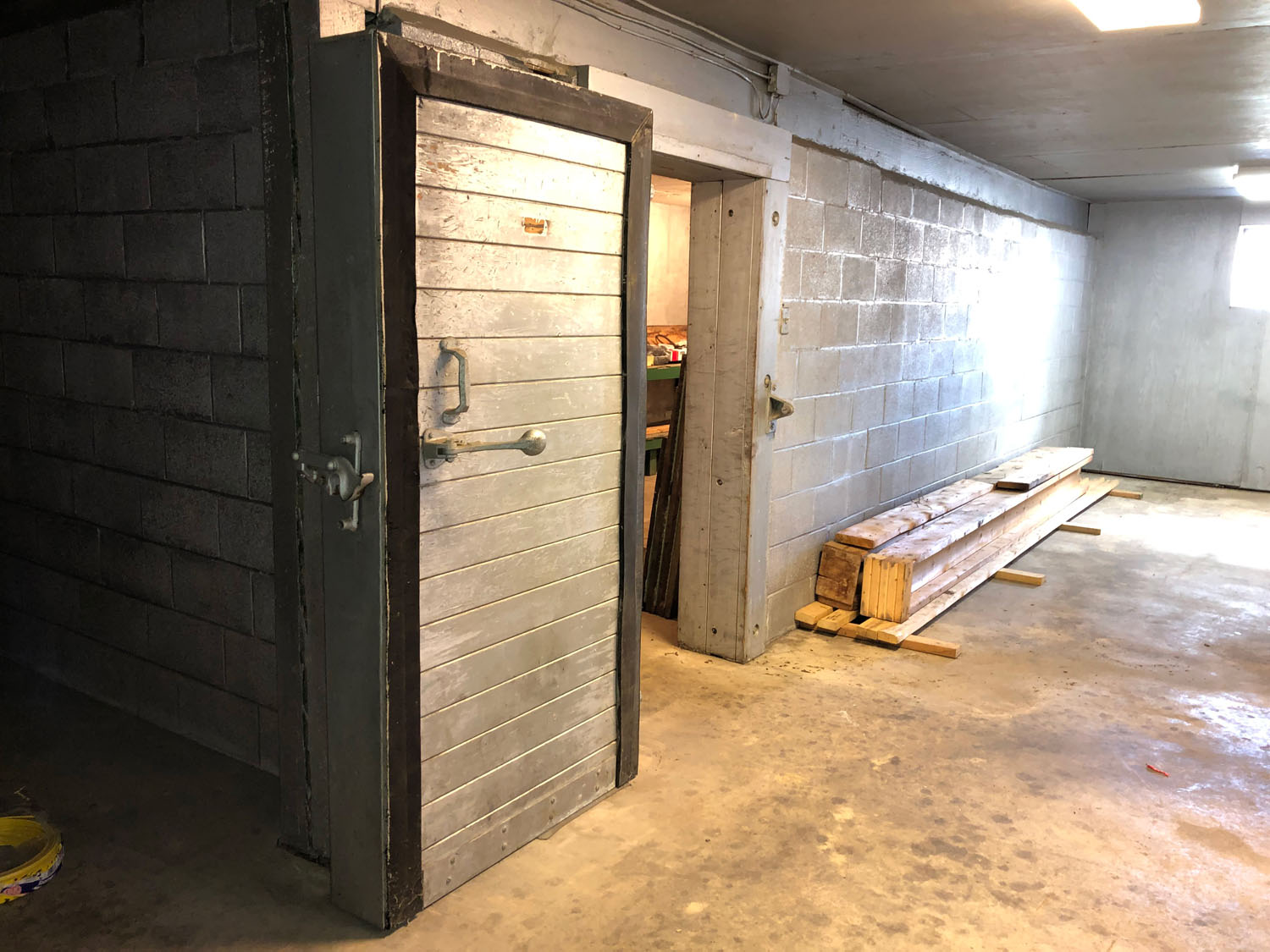 Ohhhh… This has been a family produce distribution business for over 90 years.

These could be wine cellars? Private dining rooms? Shelters in case of nuclear attack?

We toured upstairs. The brothers are still running a produce business. Huge net bags of onions and carrots were stacked atop pallets. The walk-in coolers upstairs were still operational, and there were crates of tomatoes and grapes and lettuce and… 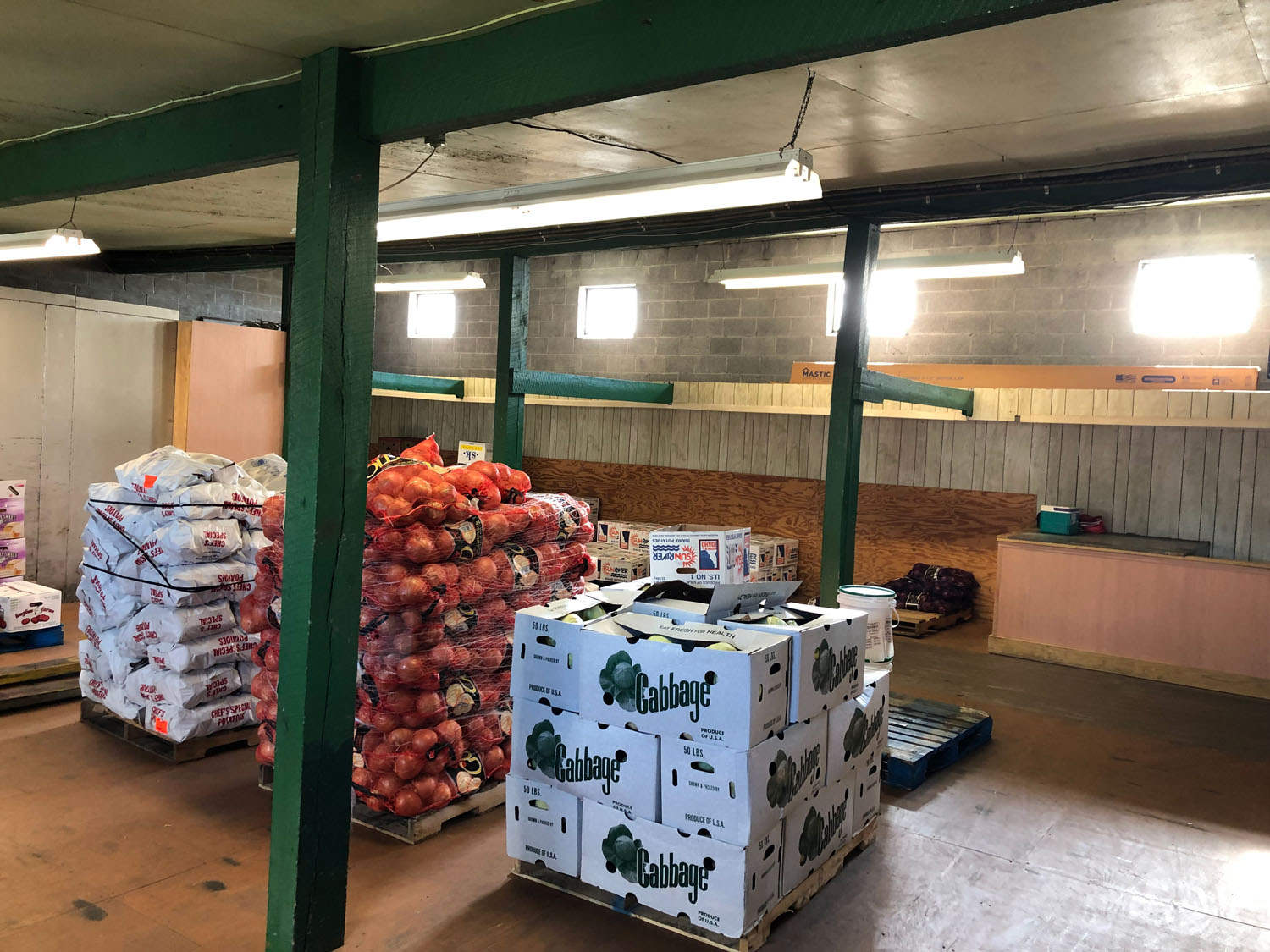 “They want to retire. They are trying to sell their produce business.”

This could be an amazing brewpub. Taps in back and tables and stand up bars along the walls and …

“Yer getting ahead of yerself,” said my Book Muse. Ever cautious. Ever teasing. Ever vague.

But it was hard to keep calm. Keep practical. The dreams and fantasies were bursting round every corner.

We descend form the “Barn” and walked toward the house. The space in between…

“This could be outdoor seating! Maybe we could get permission to put some kind of deck connecting the two buildings,” I thought.

One of the brothers met us at the house to let us in. The other brother was still living there.

It was like stepping back in time. The first room was the kitchen. It was mostly Avocado Green! 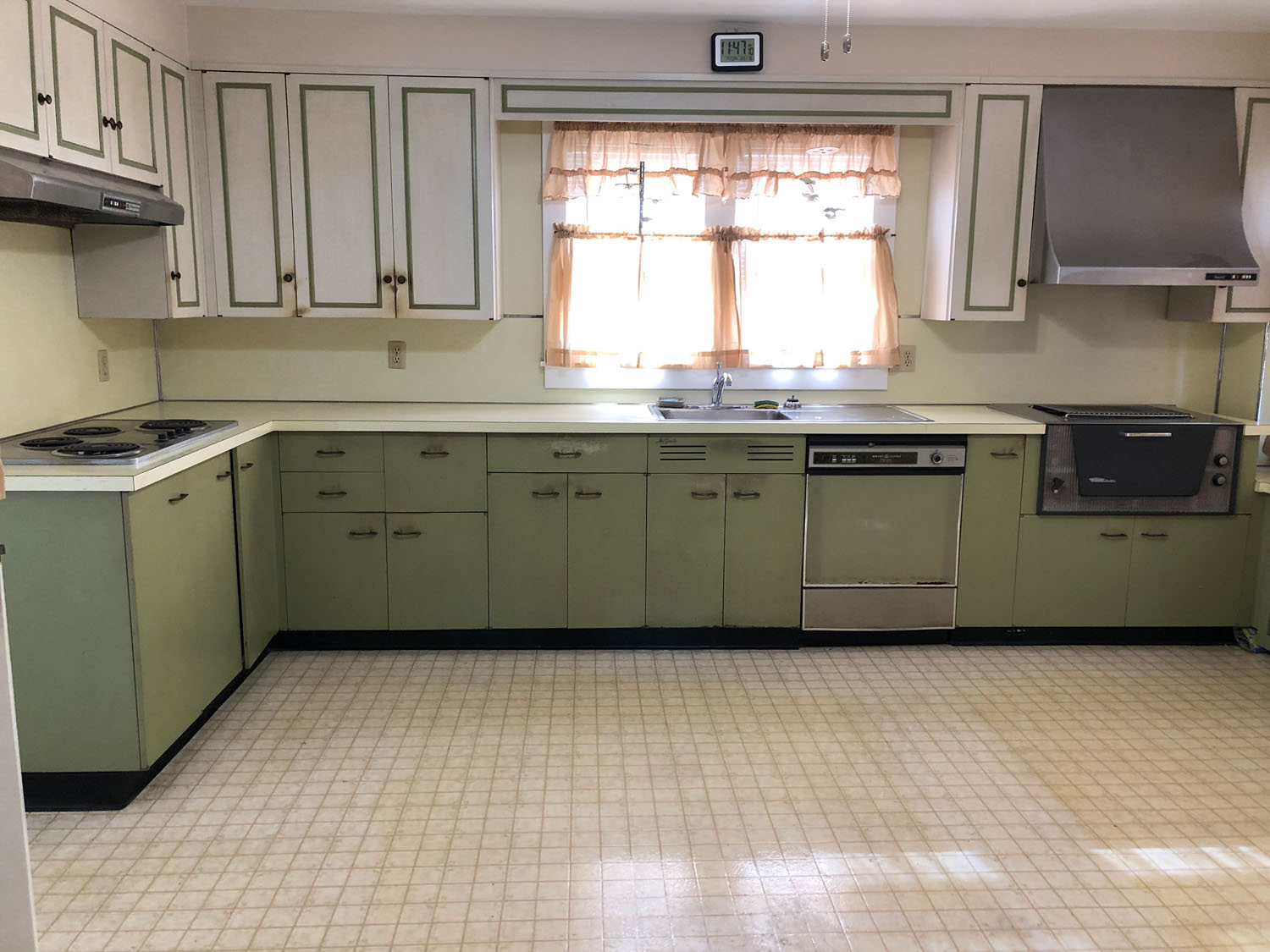 But it was immaculate and apparently in great shape. 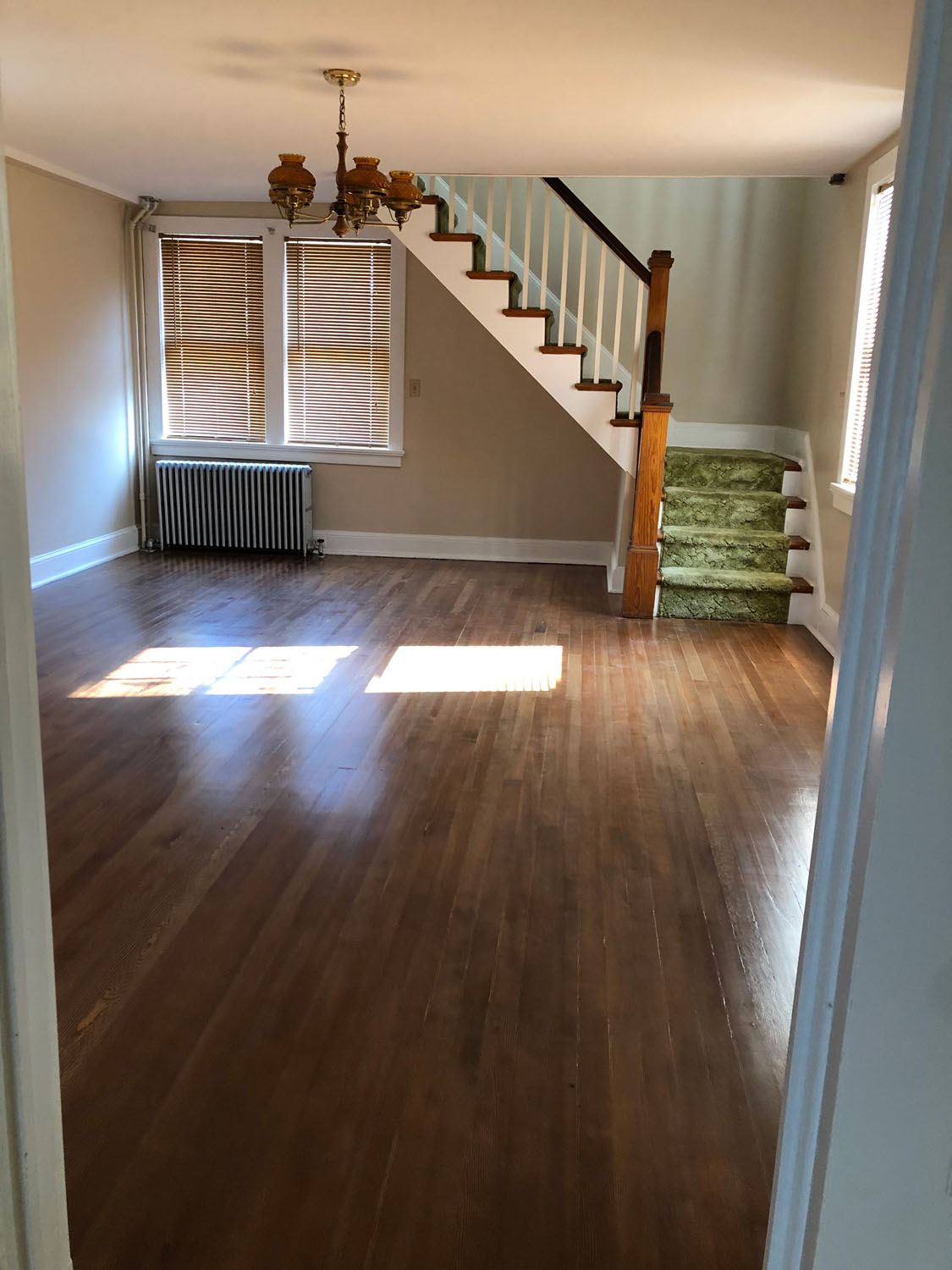 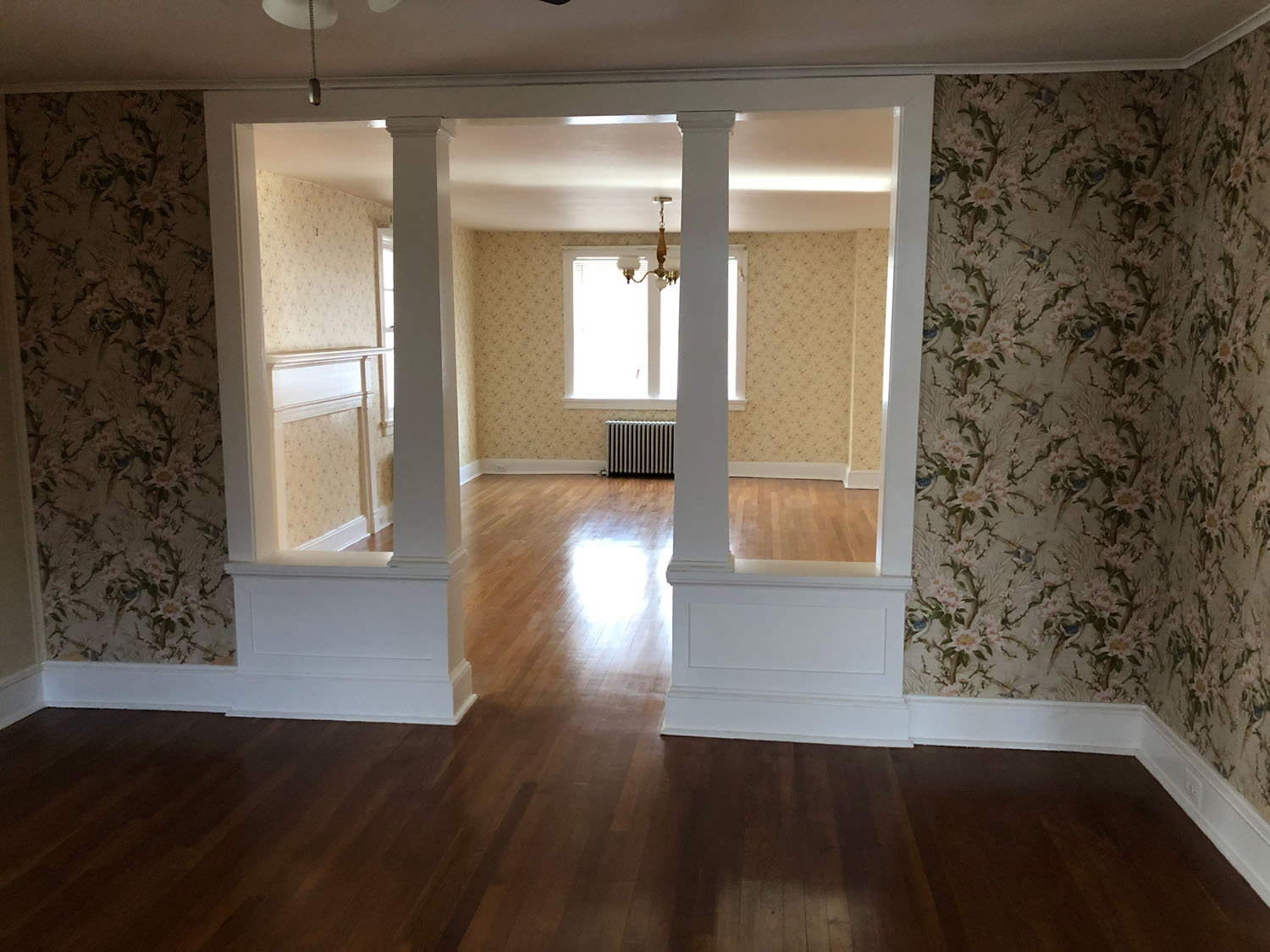 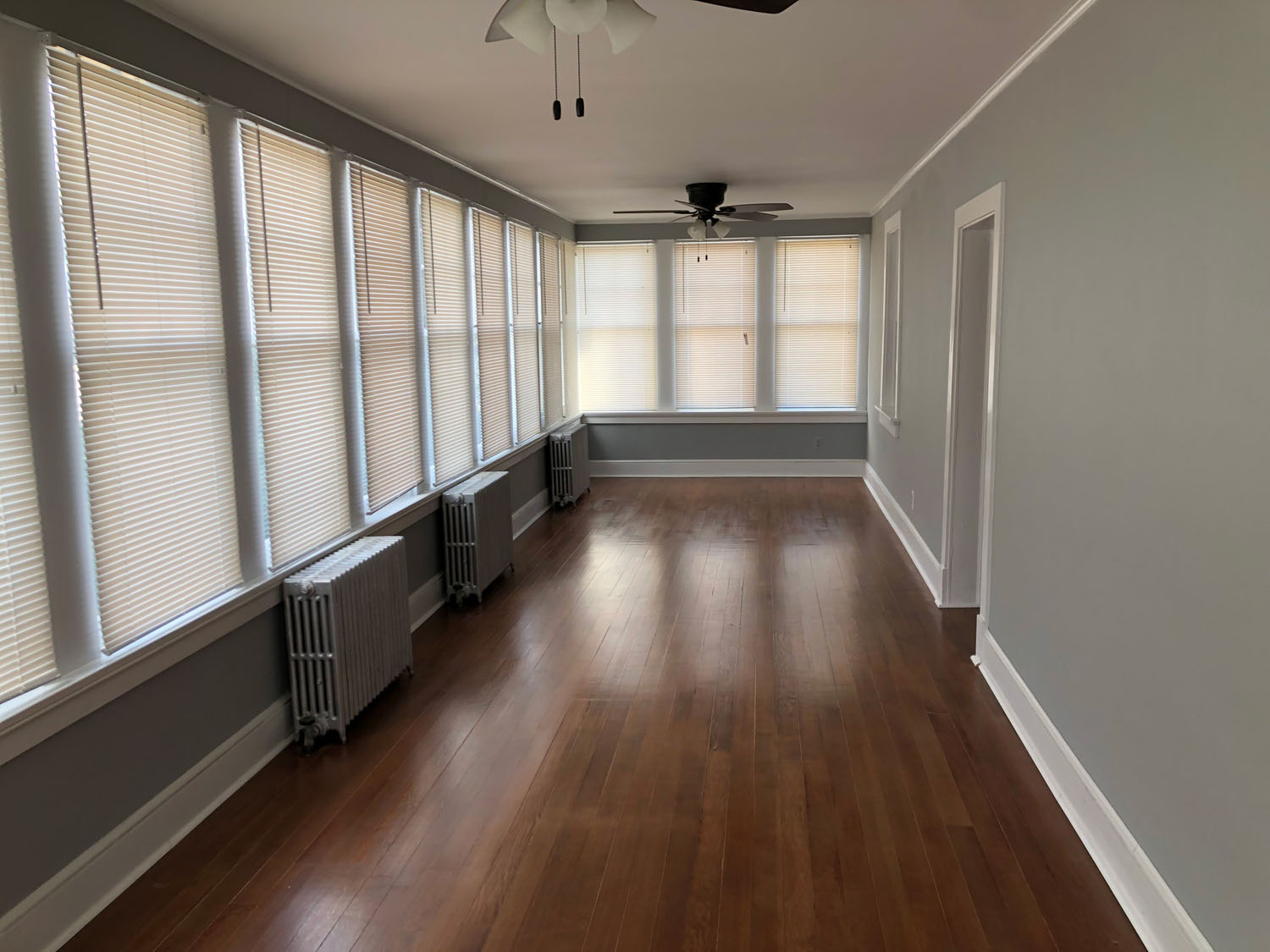 The wallpaper was ancient. But it was…just lovely. It “belonged.” The floors were level and polished. There was almost no furniture.

This was a living farmhouse from another time. But it was in “as new” condition.

It was an empty palette! A beautiful blank canvas.

This could be a masterpiece.

I could cover the walls with bookcases. I’d only put in beautiful, cool books…like a boutique bookshop. Good solid vintage furniture in each room matching that room’s former function.

A comfortable place to browse and sit and chat and…maybe have a glass of wine or a craft beer!

“You’ve never called me that before.”

There were two separate stair cases ascending to the upper level. Bedroom after bedroom.

There were a few photos on a few of the walls of young men very long ago. The brothers!

“Yep. And worked my whole life here too. My dad was a character. He raised peacocks out back. One time he went on a trip and brought back some Asian Deer!”

We went back downstairs where he unlocked a narrow door in a corner.

“The basement’s down here. Watch your head!”

We stepped down the narrow wooden steps gingerly. Indeed, the head clearance was only about 5 feet when you got to the basement ceiling.

The walls were stacked stone. The floor was cement. 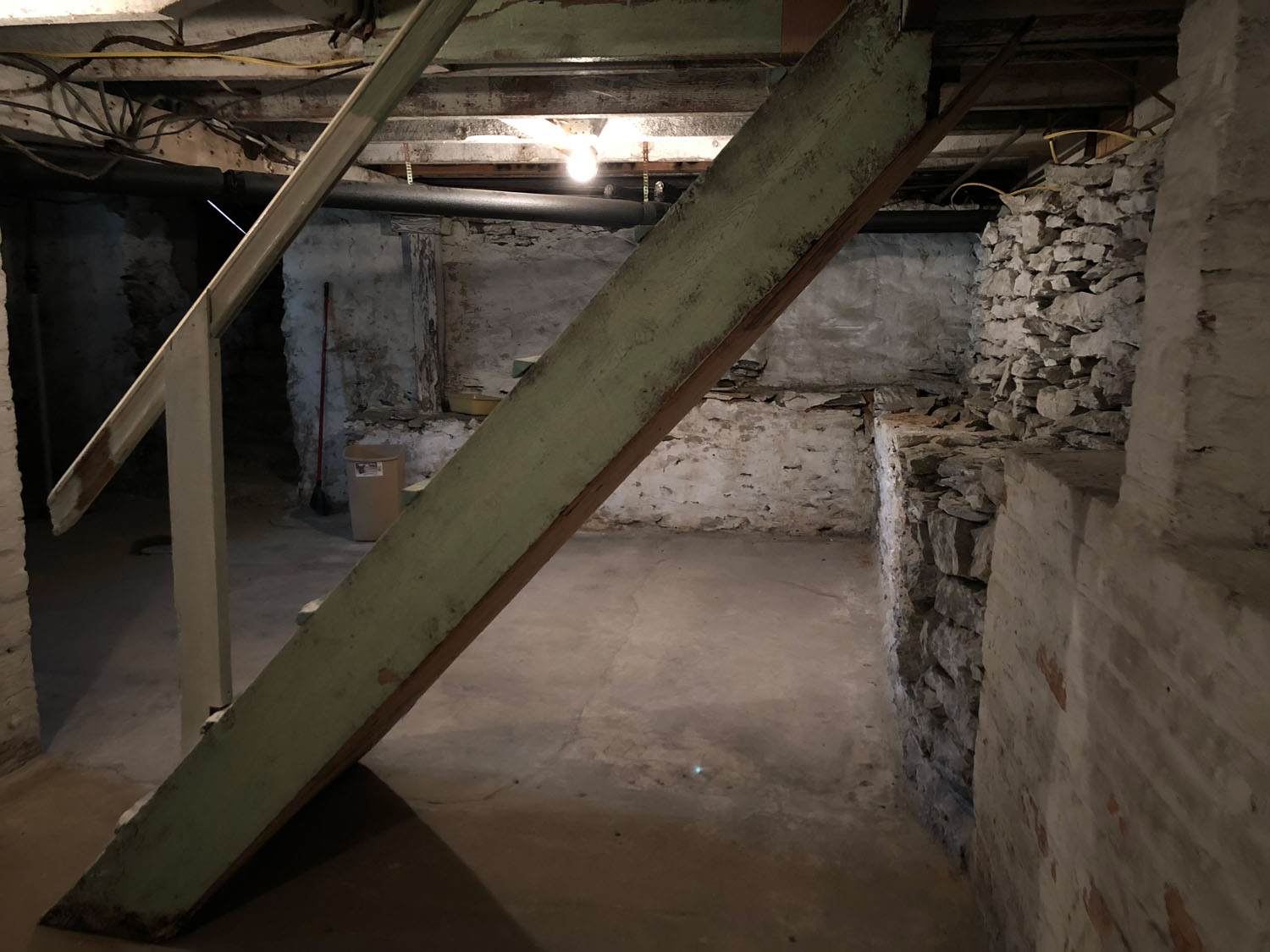 So cool. So old school.

“Perfect! Kegs could go down here,” I thought. “A little bar could be set up in the dining above and the lines run up from here.”

“Dreamer…” my muse spoke. But not teasing or chiding this time. Did she sigh as well?

We climbed back upstairs.

In the following weeks, we negotiated a price and a 120-day “Study Period.”

During that process, there was lots of good and bad news. The bad news mostly had to do with dollars. The good news was we discovered potentials that made the property even more attractive.

Me? I had plenty of sleepless nights. It would be a lot of money—just to begin the process.

And work? I am pretty much at capacity now. And I REALLY enjoy going through the books that come in—more than any other aspect of the business. If I got sucked into projects—especially tactical things that don’t interest me—it could become a miserable thing.

Time passed. We did environmental studies and engineering studies. We could put in a LOT of parking! More studies and drawings…

Before I knew it, the study period was coming to an end. I would have to proceed to settlement or bail out.

I met with bankers, and they were optimistic. I just had to sign my life away…on the dotted line.

The day was chosen. January 22.

As December ended, I decided to run away.

I had a bunch of frequent flyer miles and hotel points. I went to the airline site and searched backward. Where could I go directly?

That would be cool. I hadn’t been there for 10 years or so. And then it was with young kids.

I booked a flight and hotel. I would leave overnight the 17th and return the 21st. I’d be away during the times with the most panic potential.

So I went to Espana. I walked and walked and walked. I went to the National Library, and they had some cool exhibitions—including an original DaVinci notebook that had only been rediscovered in Royal Book Collection in the 1960s after being “lost” for 250 years. 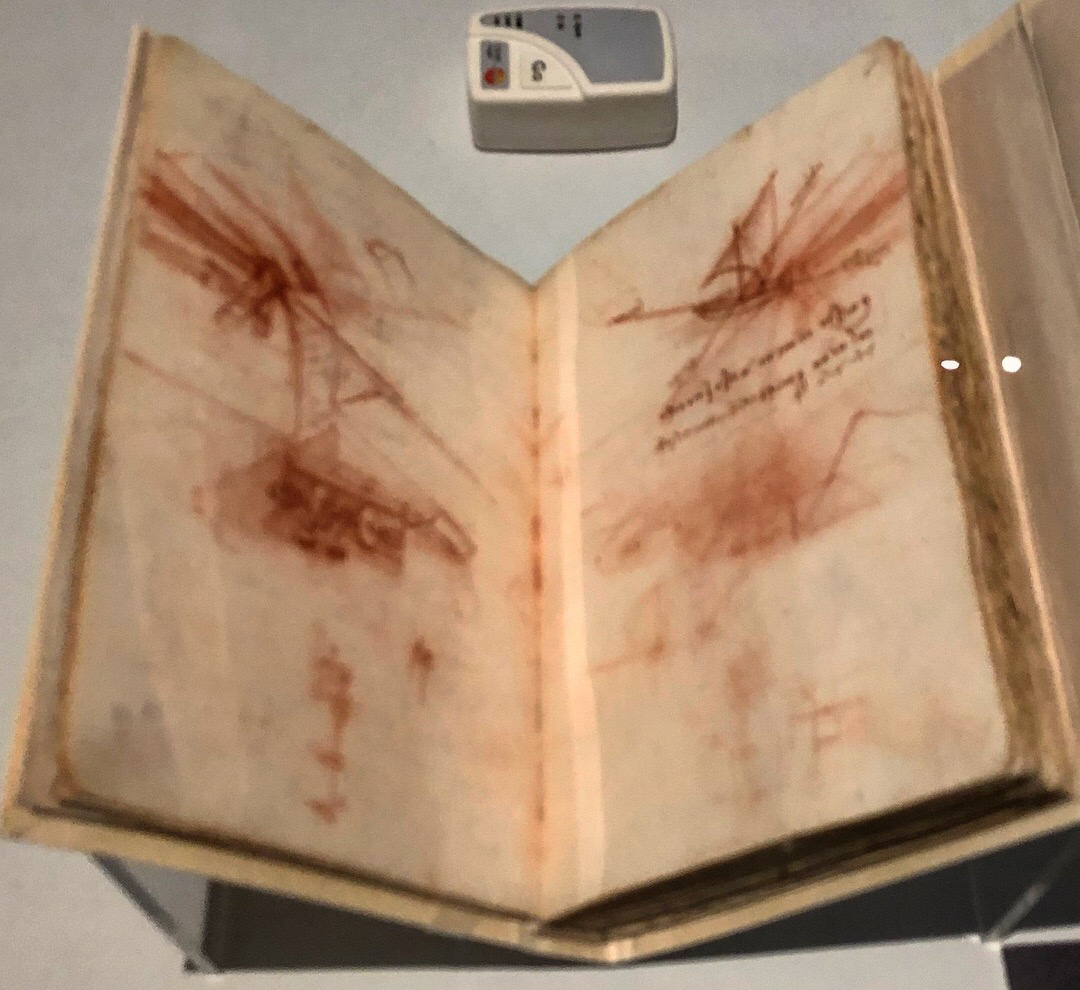 I took a leap of faith and managed a bus ride to El Escorial 50 kilometers away. No one seemed to speak English. I was quite proud I was able to pull it off. It cost about 4 Euros each way.

I had never been. It was astounding. It is a UNESCO World Heritage Site. A magnificent palace and monastery on a mountain side about 70 kilometers northwest of Madrid. Great art and architecture and La Biblioteca Real—The Royal Library. 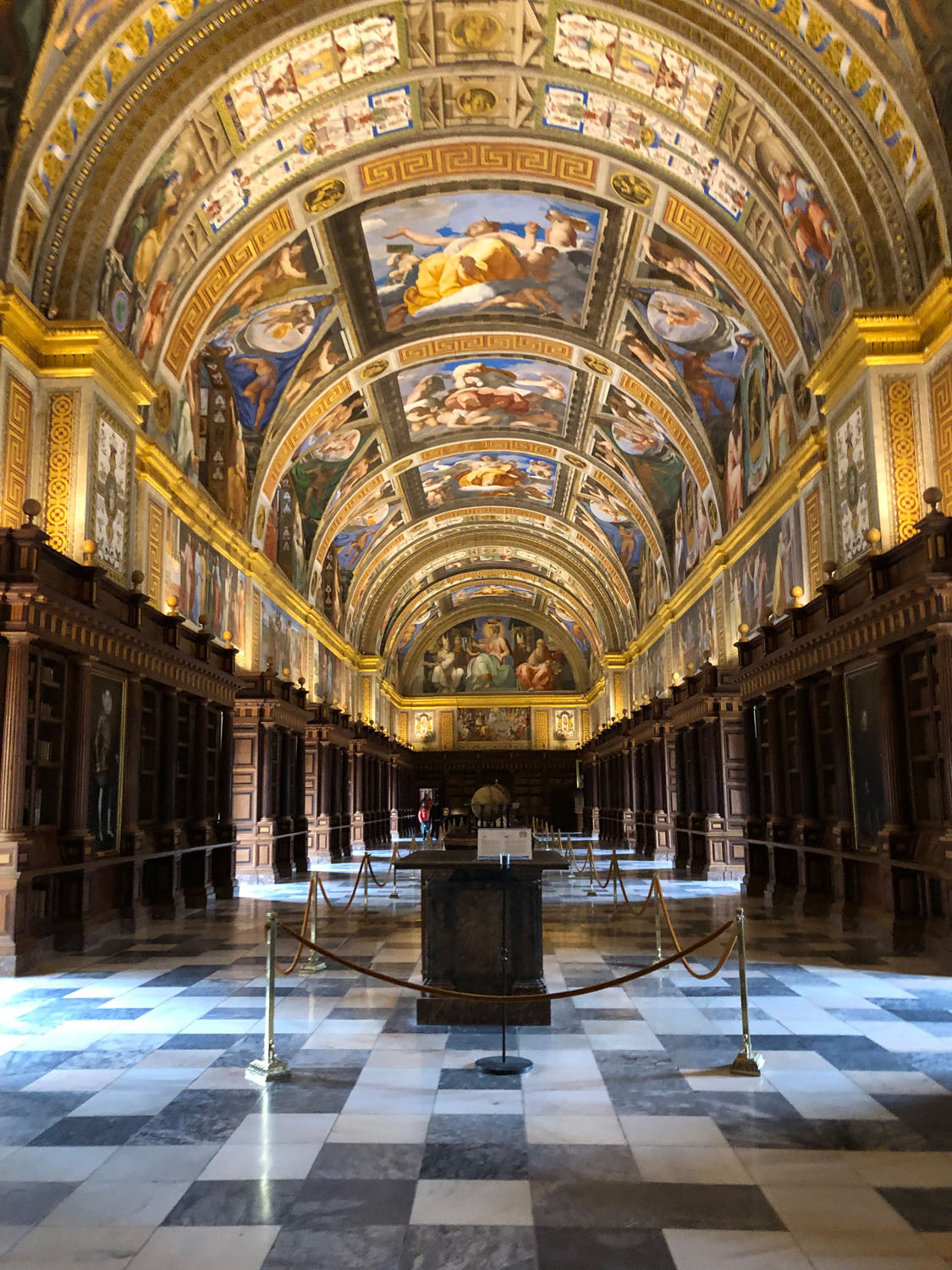 Stunning. AND all the books are shelved fore-edge out. 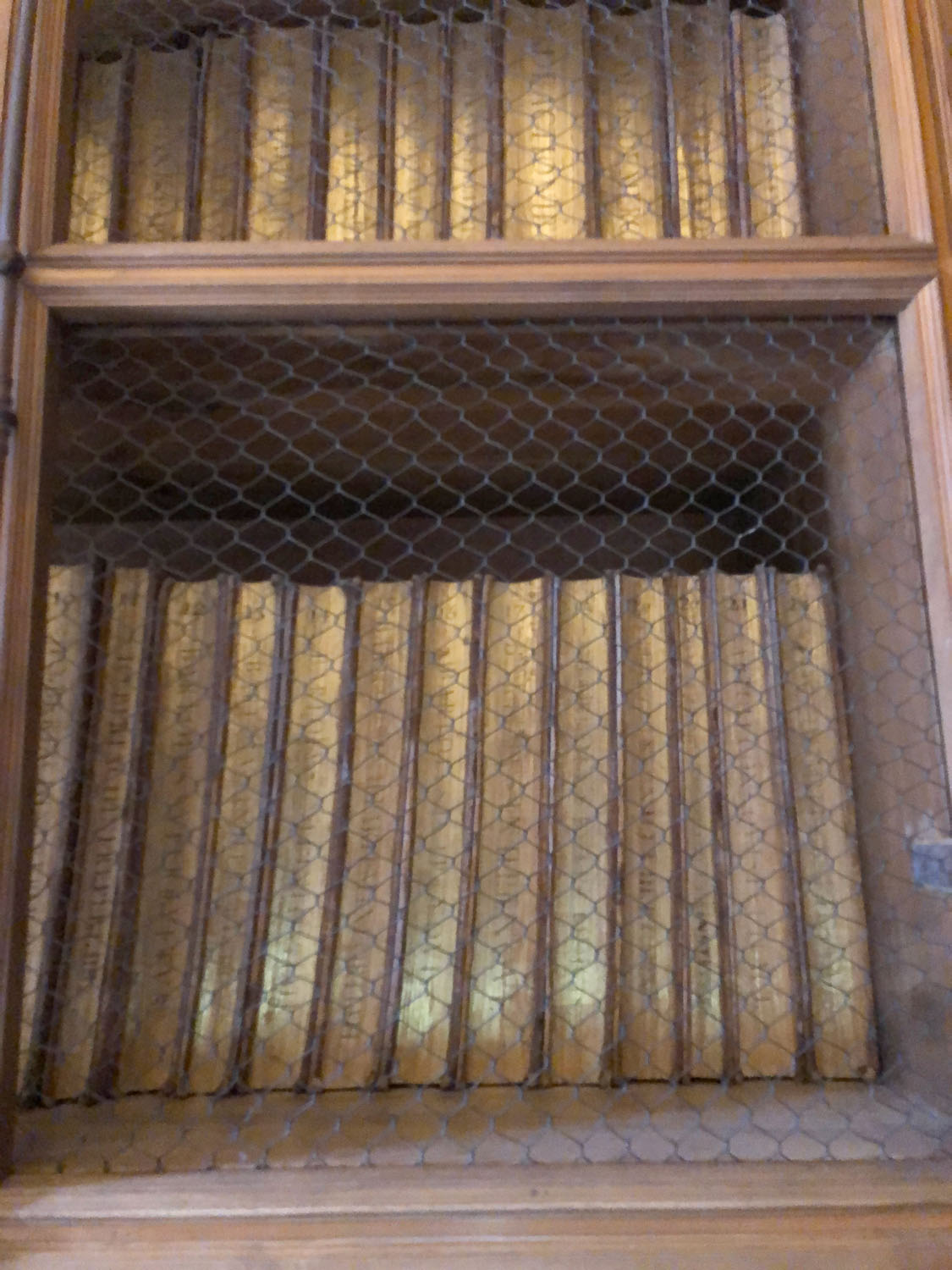 The city is fun to walk through and quite beautiful. 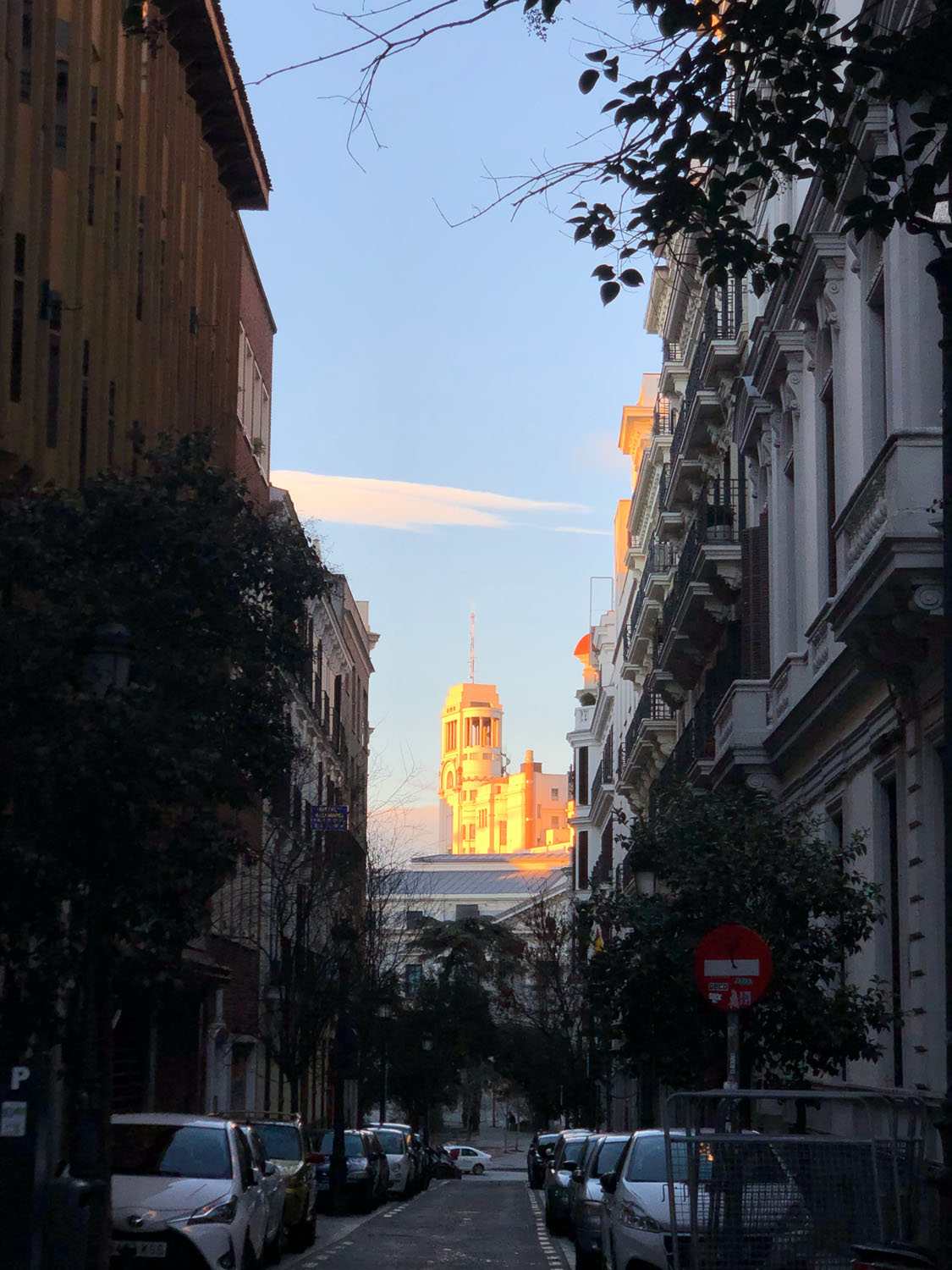 A couple days later, I was able to decipher and translate a train trip to Toledo. There I ran into Don Quixote before a city gate. 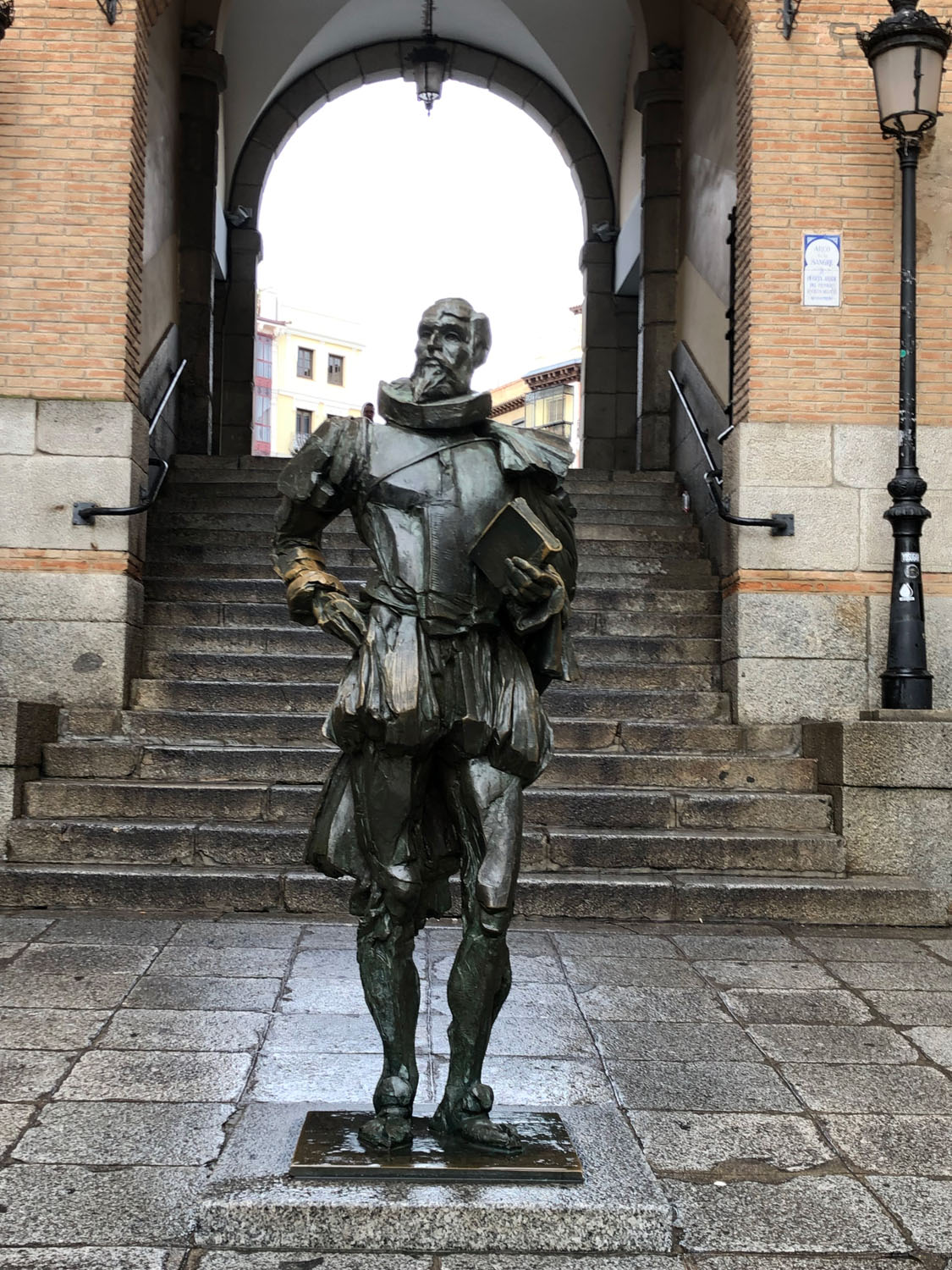 Most importantly of all, my mind was kept occupied. I couldn’t obsess about the looming event.

I flew back Monday to frigid single digit temperatures.

Tuesday there was a rush to get loose ends tied up.

2 pm, I went to the lawyer’s office and a dozen of us sat around an old conference table in a beautiful old building on Church St downtown.

I signed my name a couple dozen times and left with a thick folder of all kinds of documents.

We needed to create a separate entity of ownership for liability and tax reasons. I decided on Frederick City Farm LLC. Old. New. Urban. Country…

Where do we go from here?

We will meet with City officials soon and see what will be required. Phase 1 will likely just be a little bookstore in the old house.

We will search for tenants and people to operate…whatever the project turns into.

It could all fall apart—get too messy, expensive, complex.

Someone who wants it more than me may come and buy it solving all the questions.

Or, who knows, maybe the dream come together in part or in toto… 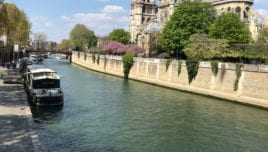 April in Paris—1 was last week's book story. It ends with my exhausted body falling into bed on Thursday night April 11, 2019... END_OF_DOCUMENT_TOKEN_TO_BE_REPLACED