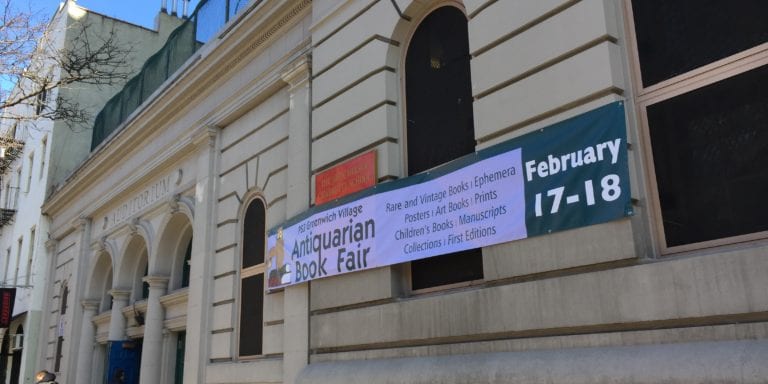 (Over the last few months I’ve been working on something bigger. A Biblio Fantasy. “Tree Song.” What follows is a chapter that was written this week following a book buying trip to Manhattan.)

Coffee, a light breakfast and then I headed downtown to Greenwich Village. It was brilliant day. Quite warm for February. I had time to ramble the Village’s cobble streets and tree lined sidewalks before the show opened.

The show has been held in the venerable PS3 Charrette School for the last 39 years.

The building is over 100 years old. It is stone and all the doors and windows are arched. A large metal plaque reads that General Lafayette visited the original school on this site in 1824.

I pulled open one side of the massive double door and stepped from the light into dim anteroom. I got my ticket then stepped though the doors into the auditorium. The room was a little city. Aisles were streets. Bookseller booths were buildings arranged in blocks.

This is a small but venerable show. The booksellers are all experienced. Many are generalists here but they bring their best books and ephemera. I stepped from booth to booth and greeted people I knew. Some I’d known since I was a beginner, a kid bookseller all those years ago. I wandered the floor of the auditorium which doubled as a child size basketball court. I worked my way through the numerous “city blocks” toward the stage but then turned off into the hallway and up the stairs the led to the show’s annex in the children’s cafeteria. That space is an odd long shape and booksellers were set up in almost random rows and aisles.

Everything was built to a smaller scale. Child size. It reminded me of the Harlem Road Elementary where I’d attended grammar school all those years ago. I wonder if the kids still get little boxes of milk. The tables and chairs were all scaled to miniature human proportions. Healthy eating posters were hung on the walls as was what is apparently the permanent weekly menu.

I wandered, looked and picked up books. There were very good ones everywhere but nothing made me stop and make a deal. I was there looking for something but I didn’t know what. Booth after booth. Book after book. Almost all of them I’d seen before. Many, many I’d handled many, many times myself over the years.

I made my way back down and in to the small-scale auditorium.

I turned right toward the stage where 4 or 5 booths were housed upon it. It is raised only a couple feet off above the polished glistening wooden slat floor. The apron arched gently into the room. A white wooden movable three-step “stool” got me on stage. The wings and crossover were not covered by drapes but by a floor to ceiling vintage oak screen. It was hinged and could apparently be slid open in sheets to expose the back stage.  I made my way from the booth at stage left in and out of the others until I was at the last booth all the way stage right. I looked through that booth. The proprietor was absent. A table adjacent the oak wall had boxes of old Vogue and Fortune magazines that you could flip through. A bar of light at my left shoulder caught my eye. There was a kind of door built seamlessly into the oak wall wing. It was couple inches ajar. Odd I hadn’t noticed it before.

I’m not one to pry or go places that are off limits but something made me want to see what was backstage in this old place. I pushed on the wooden panel and it opened further. I felt compelled to step in. The panel closed silently behind me. The light back there was far different. It was dim—the light from outdoors being filtered through mottled translucent windows high up on the wall. And it seemed to move and waver. Were there clouds moving across the sun outside? My eyes adjusted and before me I saw a table with a little jumble of old books spread upon it. Opposite from me there was a seated little old man looking down at an open book before him.

“This is an odd place for a booth,” I spoke.

He was wearing suspenders beneath his sagging tatty cardigan sweater. He had eyeglasses with round lenses as thick as old Coke bottle bottoms. They magnified his pupils so they seemed a couple inches in diameter.

“May I look at your books?”

I picked up one after another. They were all old. Some were vellum. Some were leather.

I looked up and around. All the other booksellers had signs above their booths identifying them by name or their business name and tagged at the bottom with the city and state they were from. There was nothing, no sign to identify this “booth.”

He had no shelves like the others. Just a little old oaken table and the chair he sat upon.

I looked more closely at the books on the on the table. Some were clearly ancient.

“Are these Incunabula?” I asked.

I gently raised the heavy thick front cover of a very large tome. My breath caught. My heart seemed to stop.

Gutenberg was the word I didn’t speak.

“But unrubicated. The shop copy. The first he pulled. He bound up the proof sheets and used it for the first commissions. All marked up inside. Corrections and such. Didn’t like to waste materials. Couldn’t afford to.”

“A Caxton. TROYE. His working and display copy.”

“Wynkyn de Worde. He was very picky about the type, you know. A lot of letters had to be reforged. You can see that in this copy. He marked off dozens which weren’t up to snuff and needed to be replaced…”

A large folio opened to my hand, and the illuminated manuscript looked just like the style of the Ellesmere Chaucer. There were images of knights in armor and castles in the distance in that odd compressed medieval perspective. Was it…

“Yes. Yes. Done by the Ellesmere Master’s hand,” he spoke.

“This inscription on the endpaper…”

“So this could be what…”

“Malory used to translate Le Morte d’Arthur. Yes. Yes. Some of it. But not all. Plenty of tales he left out.”

“Why these are priceless.”

“Yes. Yes. Not lost. But not found either…yet”

He reached under the table and brought out a large thin folio.

“The rest are on hold I’m afraid but I can offer you this. I was told you might want it.”

He held it out to me.

I took it in both hands. It was a tall thin folio. The boards seemed to have a loose wrap of pigskin over them but they felt strange. Kind of rough and a bit irregular.

He looked at me shrewdly—squinting those oversized eyes:

I could tell it was very ancient. Far older than the incunabula and illuminated manuscripts on the table.

“Can I give you a check? I don’t have that much cash.”

“A check wouldn’t do me any good. Pay me when you can.”

He scribbled “Paid” boldly across a blank receipt with a short fat pencil. The receipt had nothing printed on it beside the word receipt. He slipped the paper halfway into the book so the word “Paid” was all that was visible.

“There you are. I am going on a break now. Excuse me.”

He rose slowly and shuffled the few steps downstage along the wing and turned and disappeared behind the crossover. There was a round bald patch on the back of his head which I hadn’t seen when he was looking up at me.

“Tonsure?” I thought. The first I’d ever seen in person.

The panel behind me seemed to open of its own accord and the normal light of the auditorium poured in. I backed out and onto the stage. It took a few moments to get my bearings but soon the buzz and chatter and movement brought me back some.

I gingerly stepped down the three steps to the polished wooden floor. I was a bit dazed and unsteady. I headed toward the exit. I passed by my friend Jeff’s booth and he asked:

“What did you find?”

“Looks kind of rough. You’ll need a bag to get it out past security.”

“The dealer behind the screen on stage.”

He gave me a quizzical look as he handed me a bag.

“There’s nothing on the floor plan back there-no booths. What was his name?”

“I just need to get some air.”

“Well, call me after the show and we can meet for a drink in town.”

“And next time buy something from me. You barely looked at MY books.”

I walked out into the late afternoon February sun with the big book under my arm. It didn’t have much weight to it. I wanted to clear my head and love walking in the city. I decided to hoof the 50 or so blocks back to midtown.

At the hotel I was raised the 15 stories to my floor. In my room I laid the book on the red plush couch. I didn’t remove it from the bag. I didn’t want to see what it was. Not just yet. It worried me. Instead I went back outside. It was now dark, and it began snowing hard. Soon my navy blue wool coat was plastered white. The storm was exceedingly beautiful. I called Jeff to tell him I wouldn’t be able to head back downtown for dinner.

“There’s no way I’d get a cab in this weather. And I’m not feeling right.”

He said he was heading home early to keep from getting stuck.

“I asked around,” he said. “There was no booth set up behind the stage. That guy must’ve snuck in through the back to peddle his books. I wonder if he’ll try again tomorrow. What did you buy from him?”

“I’m really not sure, Jeff. Maybe I was wrong about the place.”

But I knew I wasn’t wrong about the table backstage. I knew my memory of the event was correct. As to what really happened back there… I’m not so sure.

When I looked down on the sofa the bag and book were not there.

I was too numb to be concerned. In fact, in some ways, it seemed to make sense.

I crawled under the sheets and worried into the night until Morpheus took pity on me and consciousness went wherever it goes.

At some point, dreams slipped in after consciousness slipped away.

They must have. I’ve read they always do. Most go someplace when the mind returns to wakefullness. I wonder where they go? They seem so real sometimes.

One stayed with me, however, and I can recall it vividly.

I was walking across a vast meadow, and I knew I was in Denmark. There was a vast hill ahead that nearly filled the horizon. It’s crest was quite level. It was covered with trees. All were all the same and had smooth gray trunks of varying widths. They appeared from a distance so close together that they were nearly touching one another. But, of course, they had to have been staggered. It was just an illusion from the distance. The crowns were bright green and blended together in a solid mass—a thick band of green above the trunks. Above the green, the sky was azure.

And I knew she was walking beside me. 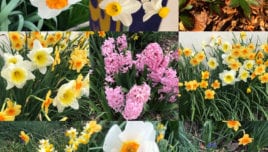 It is spring everywhere here—except in the hearts of mankind. "To arrange a library is to practice, in a quiet and modest way... END_OF_DOCUMENT_TOKEN_TO_BE_REPLACED