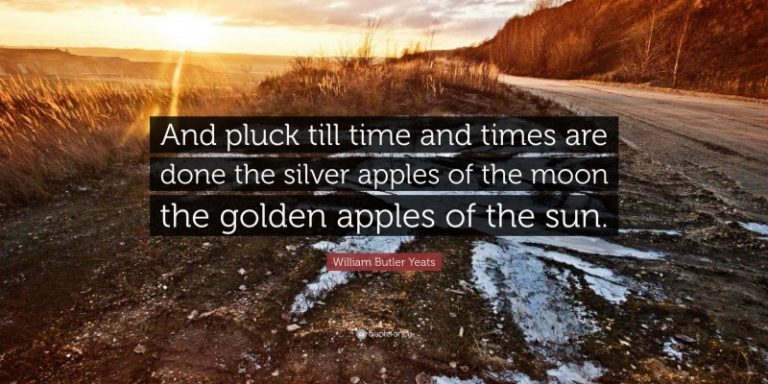 He slept like a baby, so deep and peaceful was his rest. When he started to awake, he felt like a baby. All the troubles his mind conjured were erased. His trespasses which troubled him most were washed away. He was reborn.

He was ready to do “great things.”

Then his eyes opened fully just when the enormous sun began its dawn in the west. The round moon, which stretched from the horizon to the highest heaven, was just beginning to drop toward the east.

He stretched and yawned. Then he rose. There were no aches or pains. Not a single stiff muscle or painful joint.

He slowly turned 360 degrees and drew his breath at the sight of apple trees as far as the eyes could see. Then the silver apples of the moon all separated from their branches with the sound of millions of soft “pops.” They rose in the sky toward the setting moon and vaporized into silver dust. The dust rose and rose and became millions of stars. The night sky rotated below the horizon and seemed to pull the sunny dawn up behind it.

As the sun filled more and more of the sky, the trees began to slowly bloom. Billions of apple blossom budded and then opened over a period of minutes.

The awe of it all took his breath away, and he had to consciously open his mouth and inhale.

No word could describe the scene. He continued to turn slowly on the balls of his feet in stupefied amazement.

It was Rumpie. His tiny hands were on his hips, and his back arched backward, looking up at the bookseller from his diminution.

“I hope you had a good night. I did not! I was doing your laundry. My tobacco got wet, and my pipe wouldn’t light. My dunkel bier went flat and tasted like a wet sock. Have you ever tasted a wet sock?”

“Don’t interrupt! I’m not through yet. Things were peachy here—or should I say apple-y?—before you reappeared, unsummoned and unwanted. But I suppose you had a dreamy night. Seen the universe in the palm of your hand, did you? Well, it won’t last. When you leave Avalon, you will be in the same old s…”

It was Arganta’s disembodied filling the air. The little man ceased his bold posture and shrunk a bit, if such a thing were possible. He clenched his little fists and shook violently from head to toe. Or rather, from toe to head! When the shakes got to his neck and rose there, his cheeks and jowls vibrated like sails made of flesh.

“…seller of books, your Highness.”

“Rumpie, this is no way to treat an honored guest. We will discuss this later. Did you bring his clothes back? No tricks, right? No itchy starch on the collar or waistband?”

“No, your Highness, no tricks. His old rags got the VIP treatment. You know your collar is frayed and worn through, bookseller?”

“Uh… I don’t think anyone would notice—or care—in the bookshop.”

“Rumpie, go and fetch our guest some breakfast. Fairy cakes would be a treat. He will likely need a few hundred to satisfy his appetite. Get them from the East Grove Tribe. Some of them are getting rather plump. It slows them down. A fairy that is not spry is not fairyish at all.”

“Yes, your Highness.” He stomped off. About 17 paces away—small paces—the little fellow stopped and clenched his fists and shook violently all the way from toe to head—which was not a great distance.

That seemed to relieve some tension in him and then he began skipping on his way, as was his wont.

“You should go bathe, bookseller. There is a waterfall 151 paces in that direction. Take your clothes and change. The temperature will be just right, I assure you.”

“And let me caution you. Do not allow the robe you are wearing to become wet. It will begin growing—root, trunk and leaf. We would then need to plant it! Getting a new one woven would be difficult. It is becoming a lost art. The old weavers are becoming harder and harder to awaken, I am afraid.”

He headed into the forest in the direction she had indicated. Soon he could hear rushing waters up ahead. Then he saw a clearing. As he stepped into it, he saw a waterfall. It was about 79 feet tall. But what struck him was that it wasn’t water flowing over it but silver! Opaque silver with all the splashy, misty, bubbly characteristics of H2O.

As he got closer, he noticed the pool at the foot of the falls had no outlet! Yet the silver water continued to flow and splash into the pool. The pool just beyond the falls was a shimmering mirror and as calm as silver glass. He walked round the pool, and when he got closer, he could feel the mist of the silver water. It was cool and refreshing. But the silver droplets were not silver upon contact with his skin. It was just wetness. He touched a bare toe to the pool. The toe disappeared below the surface. The liquid was cool but not cold. He decided no harm could happen to him in Avalon, so he cautiously walked into the pool. It was as if every pore on his body came to life! It was beyond refreshing. He felt rejuvenated. He cupped his hands and tossed the silver water into the air. It was a beautiful, if surreal, sight. He turned and fell backward with his arms spread and was completely immersed. All the aches in his aging joints disappeared. He rolled over and breast stroked to the waterfall. He let the waters beat upon him and each minute it seemed as though years had disappeared. He held his hands out before him and the skin was as smooth as a teen. The scar where an ax had nicked him when he was splitting kindling decades ago was gone. So too was the gray spot beneath the skin where a kid had stabbed him with a pencil. He could feel each tiny hair on his body like they were sensors bringing in data.

He bent his head back and opened his mouth and let the falling waters into his body. It was as if a wave of energy and strength poured from his core and out to his limbs. He held his hands out and spread his fingers and silver rays of light emitted from each!

He frolicked in the water like a child. He never wanted to get out.

“Kiddie Swim is over, Book Mister!”

“Not until I turn my back. Seeing you nekkid is something that would scar me forever. I’d rather stick a fork in my eye. And you may NOT call me by that name. Only those I like may use that.”

“What shall I call you then? Shorty?”

“You may call me Sir. Now, hop out. I’ve laid your Ill chosen ‘weeds’ on the bank. Do you acquire your clothes at the rag and bone shop? Get dressed quickly. Arganta is summoning you back.”

“Never you mind. Make it snappy. Noon is nearing, and I will have my first quaff of the day with lunch, errant bookseller or no.”

The bookseller slipped into his old clothes.

‘They are pretty sad,’ he thought.

He looked longingly back at the sliver falls and looking-glass pool. Then he turned and headed back into the woods toward the Queen’s clearing. With each step he took, he felt age returning. He looked at the back of his hands as the veins began rising. The scars reappeared. But all the weariness was still gone, and he felt refreshed to his soul.

He got there, and Arganta smiled warmly down at him.

She laughed, and the man heard the silver bells that tinkled on the Christmas tree when he was a little boy.

“Ahhhh, you have. And there are tasks ahead for you. But now, are you ready to revisit the library?”

“You will not run away this time?”

“Well, let us go then, you and I,
ere the evening spread’s against the sky.
And Oh, do not ask, ‘What is it?’
Let us go and make our visit.”

At that, she rose. And rose. And rose. Her long lithe legs were stockinged in gray hose. They evoked the young beech he so loved. He followed the rising until his neck ached. And then she began stepping down invisible steps on the dais, her height lessening as she came. When she reached the forest floor and crossed to him, she was only a bit taller than he! Her hair, golden and black, parted in the center, fell over her shoulders in front and behind. She held out her left arm and nodded at him to touch it. The sleeve reached to her wrist, and a bit of golden fabric was attached to a ring on her center finger. A simple gold ring but for the tiny red jewel set in it which glowed warmly, its own light burning inside. She bent and gathered her train in one arm. She raised the other from her side. The flowing golden cloth of her sleeve hung down to her waist. He reached and gently laid his right hand upon her forearm, and they began the journey toward the library. 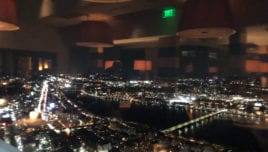 It is 4 in the morning. The end of November. I'm writing this now cuz I know that I better. Why? The end of each week has become... END_OF_DOCUMENT_TOKEN_TO_BE_REPLACED