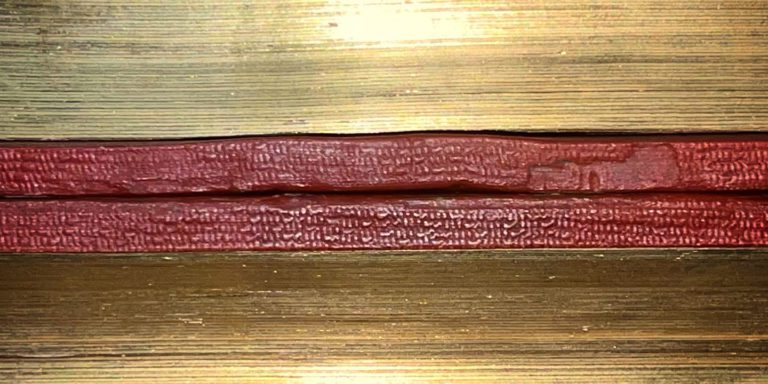 Round and Round #33 ended with the opening of a trunk that had been abandoned on the bookshop’s wooden front porch.

Annirosa, Setanta* and the bookseller had looked down in awe when the lid was lifted. Mathilda the cat was not tall enough to see the contents.

*Setanta is a giant Irish wolfhound type with a red coat who has been outlawed from Ireland for infractions that no one will discuss. He moved into the bookshop and has the ability to shelve books with his mouth. Even the top shelves! And doesn’t slobber—on books.

The two humans dropped to their knees and leaned over the opened chest. Mathilda rose to her full length and set her front paws on the edge of it and peered in. It was as if a light from within illuminated her black and white face with a golden glow.

“Gold…” Annirosa said, her word trailing off as if it was more than one syllable.

A questioning pause came from his companions.

“Books that look the same decades or centuries after they were made. These look as if they had been made yesterday. There’s nothing newer than 1850 on the top layer. These could be some king’s collection.”

For, indeed, that was the gold in the trunk. Gilded bindings so sumptuous and rich they had the appearance of precious ore.

“They are mine,” a voice said.

The bookseller looked across the trunk and saw a pair of legs clad in black leggings. His eyes rose, and the legs continued up. And up. And up.

The more he raised his head, the longer the legs seemed to be.

“And no, they are not for sale. I needed a place to park them and word was that this was a safe, trustworthy place, a safe haven for books.”

His gaze finally rose to the level of the face. A beautiful woman was looking down at him. Her face emitted the same glow as the gold in the trunk. She was clad in black and silver knit. She had her hands on her waist with her elbows out. Her hair was gold and black and fell in ringlets over the front and back of her shoulders. Her hip kicked out to one side completed the pose.

‘Peter Pan pose?’ he thought. ‘No. More like Wonder Woman.’

He wasn’t surprised. In a magic bookshop his whole adult life, he had learned to expect the unexpected.

“Why did you abandon them on my front porch?” he asked.

She replied in eight lines of iambic pentameter—two quatrains—which he could never recall, not even in the moment after they were spoken. Perhaps it was because they were spoken in Cornish. But he understood somehow. And the reason made perfect sense. It went pretty much like this:

“I was moving, and my journey was interrupted nearby. Perhaps a hundred miles away or so. This is my library. I love beautiful books. Anyway, it was a goblin problem. Pesky things. I needed both hands free. And both legs. I reached out to a colleague and was told that this would be a safe haven. Well, I have resolved the goblin problems, and I can get these out of your way with a wave of my…”

“Yes. No need to rush off. We would all love to see your books. Would you like some water? Or tea? You see we mostly just get battered tomes here. Your books are… alive.”

“No. I do not drink water. Or tea. Many of these books are Spanish leather. Do you have any Spanish wine?”

“Let me see a bottle,” she said suspiciously.

The bookseller rose and hurried across the porch into the bookshop, leaving the three women, well, two women and a feline “woman”, surrounding the trunk of glowing books. And, of course, Setanta was there, seated and gazing up at the tall woman. Balefully.

He returned in a minute with a bottle in one hand, a corkscrew and three mismatched wineglasses—his fingers wrapped round their stems—in the other.

He held out the bottle, and the woman bent to look at it. She raised her head and cocked it to one side and, with a dubious look, said, “It will do. I am thirsty. Dusty work dealing with ancient demons. I do not know why they were there. I was sure that path was clear. Things may be shifting in the worlds.”

Annirosa had just been standing there dumbstruck. “I need to turn the Open sign around. This… scene… would be hard to explain should some customers come by.” And she strode back into the bookshop.

The bookseller struggled with the cork. His hands were nervous.

“Need some help with that?” the woman asked.

“If you tilt the bottle a tad…”

“I know. You are going to break the cork bending the pull at that angle.”

“It is just that I dislike bits of cork in my wine.”

“Do you wanna do it?” he asked holding the bottle toward her.

Annirosa returned and took a glass, even though she was a teetotaler.

He poured for the three of them.

The woman tipped the edge of the glass to her lips and all the liquid disappeared. Vaporized!

The bookseller froze, his hand holding his glass suspended a couple inches from his mouth. Annirosa stood totally abashed. Setanta flopped on to the deck, his legs splayed and looked up… balefully. Mathilda sat, bent and began licking the back of her left hind leg.

He stretched down for the bottle at his feet. When he rose, she was holding her glass out. It was full!

“I am so sorry. We did not toast. It has been a stressful period. And I was quite thirsty. Let us toast to… BOOKS! The most magical things in both worlds,” she said.

“Cheers!” the bookseller and Annirosa said in unison.

And they tipped their three glasses toward one another and touched with one soft clink.

The bookseller noticed a pale rose mark on the glass’s lip. The woman followed his gaze and looked questioningly.

“I… I have only seen that in movies. Lipstick on the lip of the wine glass.”

“I suppose. I do have an errand to run. That will give you time to root through them. I need to pick up The Unicorn Tapestries for my walls.”

“Yes! The missing ones. Only they are not missing. I have them!” She laughed aloud, and the bookseller thought he heard bells.

“THE Unicorn…” he stammered and then time stopped.

He had heard those bells before. Atop the Jungfrau. Beneath the desert in Nefertari’s tomb in Egypt. On the cliff in Yosemite with water falling hundreds of feet nearby. On the Seine, the Thames, the Danube, the 18th hole on the Old Course at St Andrews when a descendant of Old Tom Morris told him just where and how hard to putt for birdie, in the gardens below the magic beech tree…

He looked at her face again and wondered where he had seen it before. Stunning. He had to avert his gaze.

‘I will hear those bells when I cross to the other side,’ he thought.

“Silly Bookseller!” She laughed. “Well, I must fly. You may keep the books for a bit longer. They have been here for seven years, anyway. There is so much you do not see. The wine was not terrible. Perhaps I will bring a bottle from my cellar. I have the world’s only flying cellar, you know. I still have some pre-war cases. Well, it has been an interesting stopover. Maybe I will shop some when I return. You have some fine books you do not know you have. Mathilda, your coat is lovely as always. Setanta, will you ever learn NOT to drool on people? My boots are wet! Annirosa, It is good to see you gainfully employed at last.”

“Not so gainfully, I am afraid,” Annirosa replied morosely.

“Maybe we can discuss a raise,” the bookseller mumbled.

The woman started to turn.

“Wait! You haven’t told us your name.”

“Rumplestiltskin!” she laughed, and bells chimed all around the bookseller’s head. “We have spoken many times before, you silly bookseller!”

With that, she turned and started across the porch.

“I don’t suppose you need a ride?”

“I wouldn’t call it much more than a town here.”

She turned and strode off the porch and started across the lot. Her long legs took her swiftly. He could swear she got a tiny bit taller with each stride. He could swear there was a tiny bit of space between the soles of her high leather boots and the asphalt—and the space seemed to be increasing ever so slightly as she moved away.

The silver bell above the bookstore door trilled merrily and loudly behind them. Annirosa and the bookseller turned to see who could be going in or coming out. The shop had been closed quite a while. When they turned back, she was gone. Mathilda had not been distracted. She sat on the top step and raised her head toward a small cloud—the only one in the sky—which was rushing toward the west.

‘A dryad,’ he thought. ‘Or a goddess. Or, maybe, a muse. I have never seen one, but I always imagined one would look this.’

“Well, let’s get this chest inside.”

He grasped the leather handle on one end. Annirosa took the other. They rose to lift it, expecting a strain, and found it was light as a feather. 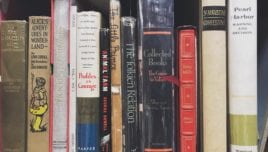 It seems appropriate for this first blog post to pull one of my "first books" off the shelf and write about the memories holding it again conjures... END_OF_DOCUMENT_TOKEN_TO_BE_REPLACED